Dash are trending up, but finishing issues are holding them back 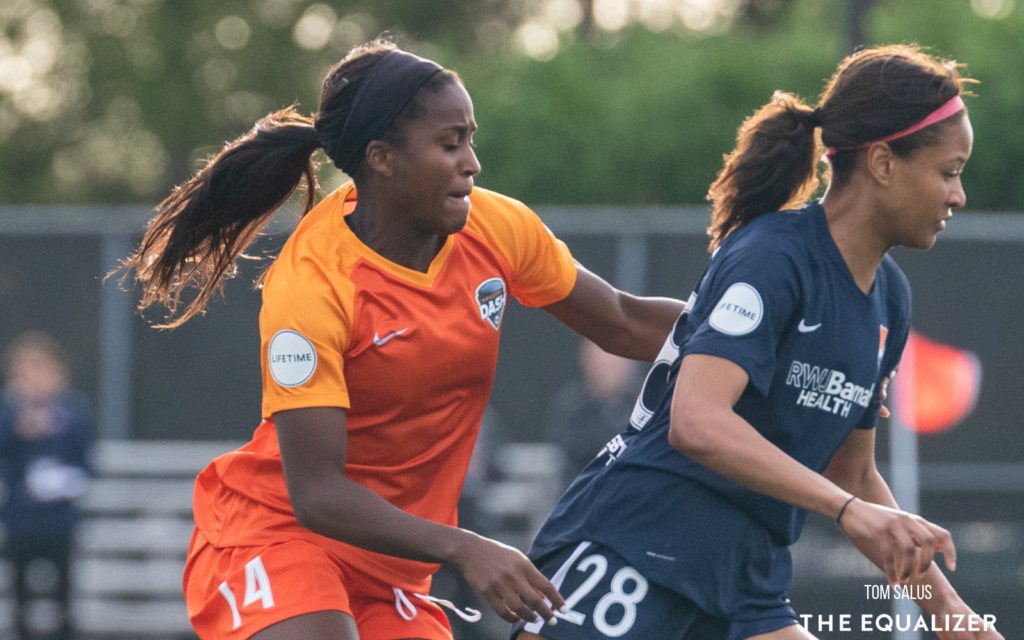 Four weeks into the National Women’s Soccer League season, the Houston Dash are in third place at 2-1-1. They’ve scored one goal in every game, boast two shutouts, and have given up five goals (four against North Carolina alone). In doing so, even for long stretches in that the North Carolina blowout, they’ve shown a more organized side than ever before. But is it enough to push them into a higher tier?

The first thing that jumps out when watching the Dash this year is how much better their defensive shape is as compared to previous years. A big part of that is due to Sophie Schmidt. The veteran midfielder not only relieves pressure on the back line, intercepting penetrating passes and breaking up counterattacks, she also rotates backward into the defense as needed. Whether that’s to cover for Amber Brooks or Clare Polkinghorne when they make a run up-field, or if the fullbacks are up the flanks, Schmidt’s presence makes sure that it’s rare there are too many gaps in Houston’s defense.

The lone exception to that is, of course, the second half against North Carolina. Now, most teams in the league have collapsed against the unrelenting pressure of the Courage at one time or another, but closing out games has always been a weakness for Houston, and only holding out for 45 minutes isn’t going to get them into the playoffs.

For much of their existence, the Houston Dash have been a counterattacking team. Sometimes it was simply an admittance of that being their best chance at success; at other times, it became a reaction to being overrun time and again.

These days, the Dash look a little more patient, a little calmer in possession, a little more willing to combine and break down opposition. That’s not to say they can’t counter – with their speed up top, they’re still built for it – but they’ve gotten much better at passing out of pressure and playing one or two touches with teammates. Combined with the willingness to press and jump on poor passes (something Nichelle Prince is proving particularly good at), it makes the Dash a triple threat in the attack.

However, it all comes to naught if the Dash can’t put goals on the board, and so far that’s where they lack the most. Both Kealia Ohai and Rachel Daly have had fantastic goals, and Prince and Sofia Huerta have capitalized on mistakes. But multiple players have missed sitters; most notably, Daly has gotten herself 1-v-1 with the goalkeeper on three separate occasions and failed to convert any of them, appearing to be overthinking it. Every game in which the Dash have picked up a point has been close down to the final whistle despite plenty of opportunities to put it away.

The Dash are second in the league in both shots and shots on goal and have the best shots-on-goal ratio among all teams, but they are fourth in overall goals scored. Finishing has been an issue for most teams, with superb goalkeeping playing no small part. It’s likely to improve as the season grows, particularly once all the internationals return after the World Cup, but if the Dash are going to pick up points in the interim, that needs to be an immediate focus for James Clarkson.

All in all, this is a better Dash team than we’ve seen before. But better doesn’t mean great, and they’re not the only team to improve. A long season and tougher competition awaits, and Houston has to continue to be better each week to make the top four by October. So far, at least, they’re trending in the right direction.