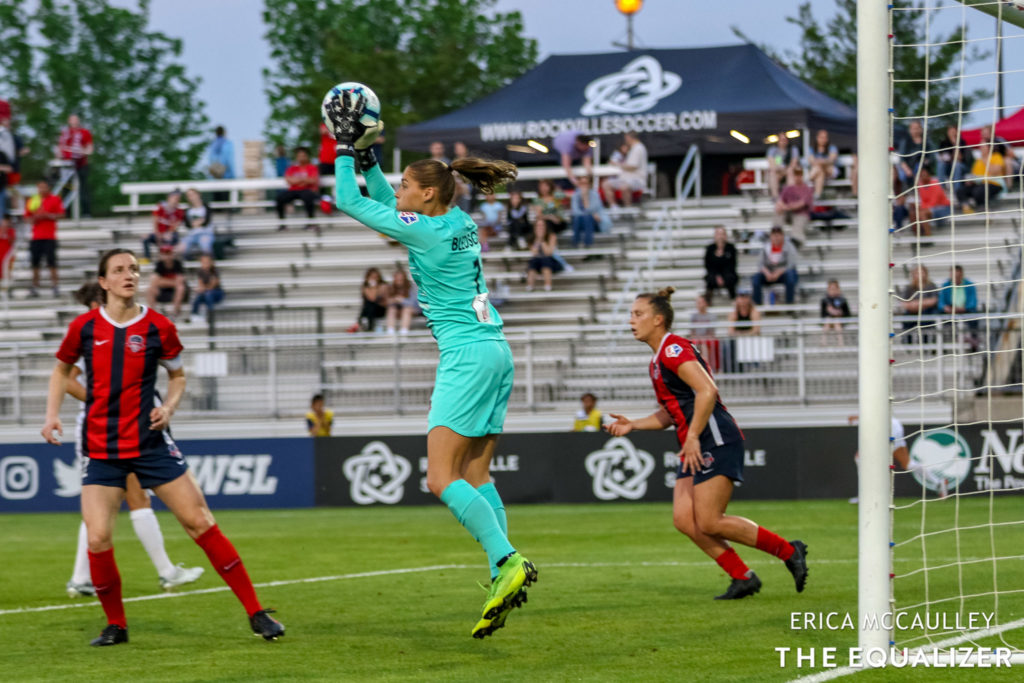 BOYDS, Md. — Aubrey Bledsoe isn’t afraid to put her body on the line.

She’ll dive left and right, smacking her body off the ground. If you’re in the stands at the Maryland SoccerPlex or at another stadium in the NWSL, you can likely hear the thumps.

Because of her efforts, Bledsoe has earned the respect of her teammates. Those efforts were put on display on Saturday night against Reign FC. The veteran, 27-year-old goalkeeper was put to the test, making nine saves on eight different Reign FC players. Jodie Taylor was the only Reign FC player with more than one shot on goal.

After the match, Taylor tipped her hat to Bledsoe. “Goalie had a really good game, made some good saves,” Taylor said. “It was a challenge to play against her.”

The praise only went higher from there. Wearing the same crest as Bledsoe, her teammates applauded her physical performance and capability of leading them through tough sequences. Bledsoe has been tasked with guiding an extremely young backline this season. With Tori Huster out on Saturday due to a hip injury, the backline consisted of three rookies — Sam Staab, Paige Nielsen and Dorian Bailey — and one-year veteran Megan Crosson.

Bledsoe said that with such a young team she’s learned to take more of a leadership role.

“We are a very young team, but I think it’s great that we’re all very impressionable,” Bledsoe said. “Everyone is eager to learn. We’re not just stuck in our ways. I think we’re getting getting the best out of each other. We might not have the international experience, but I think when we work together as a whole we’re unstoppable. It’s fun to play with each other.”

HOW DO YOU DO THAT, @AubreyBledsoe?

Chance to make the leap

The Cincinnati native is third in the NWSL in saves. She combined for five saves in the Spirit’s last two matches. However, now she holds 14 saves to her name, so far, with three matches under her belt.

Ashlyn Harris is above her in second, but will be departing from the NWSL for a long period of time while she joins the U.S. Women’s national team for the World Cup. Currently leading the league in saves is Kailen Sheridan, who has a shot of making the Canadian roster.

Should both players join their respective national teams, Bledsoe could set her season apart from other goalkeepers.

Bledsoe has already set herself apart from other goalkeepers in the league in the eyes of her teammates. After Saturday night’s nine-save performance, Cheyna Matthews said that Bledsoe carried the team and that she’s been “lights out” all season. Andi Sullivan joked that she would have to treat Bledsoe to dinner. Meanwhile, Cali Farquharson called her goalkeeper “a beast.”

While Bledsoe’s goal is to become a champion and be the best goalkeeper, it’s all about providing for her teammates. Bledsoe said that she feeds off the performance from the players up above her on the pitch.

“We all have great belief in each other,” Bledsoe said. “I was feeding off the performance from everyone else. Paige played for the memory of her mother and Andi Sullivan had a great game. I just did my job, just stepping up when I needed to. I think everyone played lights out in the second half, and I’m just happy to do my part.”

Bledsoe said that for the team to have success, they can’t be fearful of any opponent.

“We didn’t look scared in the second half,” Bledsoe said. “If we can bring that fight, and maybe that’s some of our youth, we can’t let teams bully us. That’s what Richie [Burke, Washington Spirit head coach] likes to say. So, if we come out with a little more swagger, we can bring that forward to our next games.”

Washington will take a small trip up the coast to face Sky Blue FC at Yurcak Field on May 11. The Spirit and Sky Blue FC already met this season in the Spirit’s home opener, where they claimed a 2-0 victory.