NWSL Saturday: Courage on the brink of more history 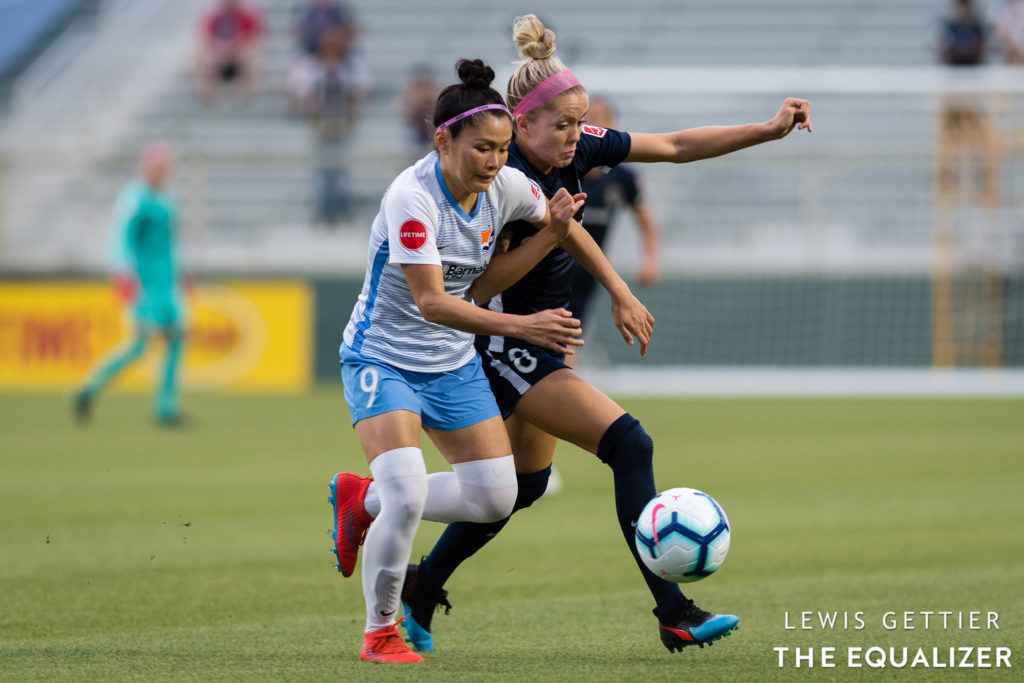 It took waiting out a weather delay and one of the best goal line clearances in recent memory, but the North Carolina Courage survived a stiff challenge from Sky Blue FC to move to the brink of the NWSL record for consecutive regular season matches without a loss. The 0-0 draw at Sahlen’s Stadium marked the 15th straight time the Courage have played in the regular season without losing. Seattle Reign FC opened the 2014 season with a run of 16 straight. The Courage can equal the mark next weekend in Chicago against the team that ended the Reign’s streak.

The moment of the match happened in the 90th minute when Sky Blue got Savannah McCaskill down the right side with enough space to cross to a charging Imani Dorsey. The play pulled Courage keeper Steph Labbe out of position but she hustled across her line to cut down Dorsey’s angle. Still the shot from the NWSL Rookie of the Year was heading for the goal until Mathias hustled over and kept it out at the last instant.

Labbe earlier made a strong save against McCaskill who had taken a second ball out of the air and driven it low near the far post. Less than two minutes later, Kristen Hamilton appeared to have Kailen Sheridan leaning the wrong way but the Sky Blue keeper was able to make a diving, punch save.

Which more impressive:@smccaskill_21 side volley?

Not to be outdone @Kailen_Sheridan doin' her thing on the other end for @SkyBlueFC.

In the first half the Courage twice hit the post, one each for Lynn Williams and Debinha. The match went to the half and then resumed as normal but torrential rain began to fall early in the second half. Lightning moved into the area and the match was delayed for nearly two hours less than eight minutes into the second half.

The Courage (2-0-2, 8 pts) remain undefeated but are a point off Utah Royals FC and have played one more match than the league leaders. Their match in Chicago is Sunday, May 12. Sky Blue (0-2-2, 2 pts) return home to host the Washington Spirit on Saturday, May 11.

Aubrey Bledsoe made two fabulous saves in as many minutes during the closing moments to preserve a 0-0 draw for Reign FC on the road against the Washington Spirit on Saturday evening. The draw was the third from four games for Reign FC who are still searching for their first victory of 2019.

HOW DO YOU DO THAT, @AubreyBledsoe?

The first save in Bledsoe’s sequence came in the 85th minute when a scramble near her six-yard box ended with Bethany Balcer getting on the ball and firing a shot that had eyes for the far post. But Bledsoe reacted immediately and leaped to her right to knock it away. Two minutes later the Spirit were whistled for a handball inches outside the penalty area. Elise Kellond-Knight hit a swerving free kick that made its way around the wall and on goal where Bledsoe made yet another outstanding save.

The Spirit had a golden chance to snag a late winner. Cheyna Matthews led a two-v-two attack but elected to take a shot instead of rolling a pass to Chloe Logarzo who would have been in on Reign keeper Michelle Betos. Matthews’ shot tricked wide.