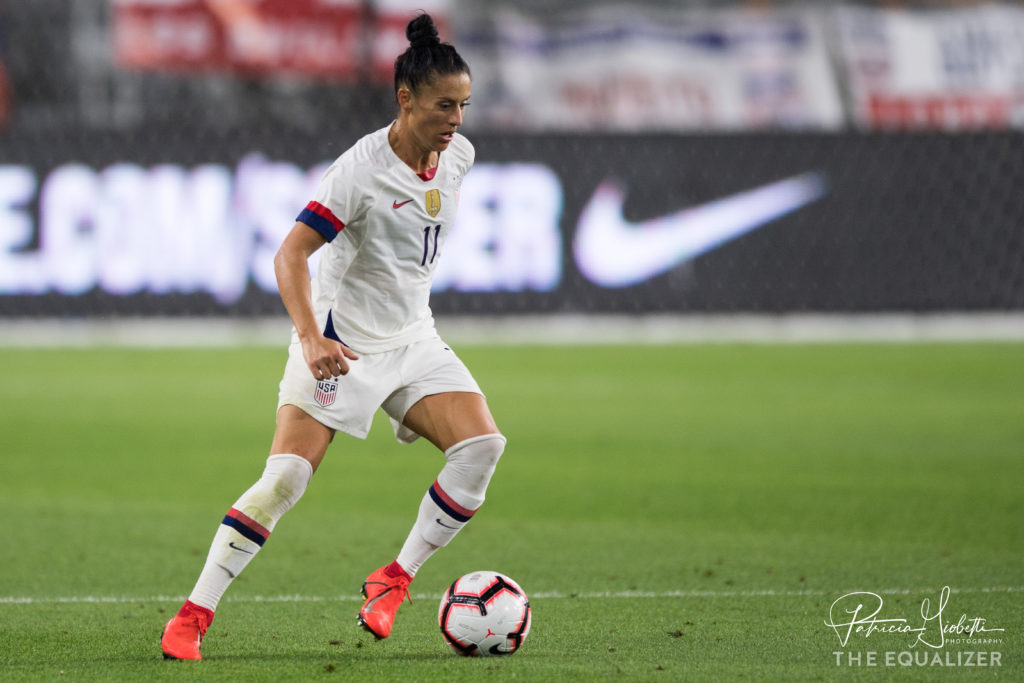 Jill Ellis sat at a podium following another suspect performances by her outside backs. The United States women’s national team coach looked her questioner in the eye and said: “I haven’t thought about that.”

The question was about the possibility of Ali Krieger getting another call-in. A veteran of 98 caps at the time, Krieger had been frozen out of the U.S. roster since the 2017 Tournament of Nations, when she rode the bench for all three games. Since then, she was taken off U.S. Soccer’s list of federation players whose NWSL contracts they were subsidizing.

Ellis’ apparent dismissal of Krieger’s chances happened near the end of the 2019 SheBelieves Cup. There were only two matches between then and today, when the 23-woman World Cup roster was announced. Ali Krieger looked to be finished as an international player.

Less than two months later, Krieger is on her way back to the World Cup. She was called in for the two final matches before selection and she did earn her 99th international cap when she went 90 minutes against Belgium in April. Admission to the century club now looks inevitable even if Krieger is not likely to reprise her 2015 role as the every-match right back.

Ellis is not obligated to share her every thought on the player pool, and she is also within her rights to changer her mind. But the reemergence of Krieger has come as a surprise considering how long she was in the wilderness. While she was losing her place in the national team, she was an every-minute player for the Orlando Pride’s 2017 playoff team.

Surprising as it was, reaching out for Krieger made sense. Outside back has been thin in the U.S. pool for some time. Kelley O’Hara is the first-choice right back but has struggled to stay healthy over the last year. Casey Short has tumbled down the depth chart in recent months and also missed time this year through injury. Emily Sonnett, a center back by trade, has recently been the first alternate as a right back.

The Krieger question posed to Ellis came during a SheBelives Cup in which left back Crystal Dunn did not perform well. There is an incredible groundswell of nostalgic support for the popular Krieger, but the truth is that with Jaelene Hinkle not under serious consideration to play for the U.S., Krieger was always the next best option at fullback.

In the end, it seems the decision came down to Krieger or Short. If the three NWSL weekends of 2019 were the deciders, Krieger probably won out on the strength of her durability, having played the full 360 minutes over the Pride’s four matches. Short missed opening day and then played 75 minutes followed by 90 in the three Chicago Red Stars matches so far. The U.S. roster is not longing for center backs, but if versatility was a check box, Krieger has more experience playing centrally. Another factor could have been that Krieger plays on the right, where O’Hara’s health is much more suspect. Compare that to Short playing on the left behind the uber-fit Dunn.

About that midfield decision

The case of Morgan Brian is far more curious. Like Krieger, Brian was a key member of the 2015 World Cup squad. She left Canada looking like a star. But her star has taken a fall over the four years since. Injuries have kept her off the field much of the time and on minutes restrictions much of the time when she did play. Things seemed to come to a head before SheBelives Cup, when Brian was left off the roster. U.S. Soccer called it a coach’s decision. Brian was not included in the more recent series of friendlies either. She told The Equalizer in March that she removed herself from consideration in order to get healthy.

Brian has played well in three appearances for the Red Stars but none of the three has lasted more than 61 minutes. She played 44 minutes total in the other two games. Being dropped from the team in February and staying away through the naming of the roster is generally not a road map to the World Cup. Was Ellis just letting Brian come up for air while attempting to get healthy on her own time? Is she playing the too-talented-to-leave-home card, similar to the way she tends to shoehorn Mallory Pugh on to the field even in unfamiliar positions just to make sure her skills are out there somewhere?

In Brian’s case, her inclusion was at the expense of McCall Zerboni, though it could play out that the bulk of any backlash will be for Allie Long and not Brian. Zerboni would have been a motion-picture worthy story had she made the team. An 11-year veteran of the U.S. pro leagues, she just kept grinding and, with a little help from her coach and de-facto publicist Paul Riley, eventually became too good to ignore. We’ll never know if Zerboni’s fate here would have been different had she not suffered a freak injury in a fall against Chile during a friendly last September.

Back to Brian: Unlike O’Hara, whose effectiveness is limited only by her absence, Brian has not only been injury prone but downright poor at times. In her last appearance for the Stars and Stripes, against France in January, Brian was a standout for all of the wrong reasons.

Twenty-three is definitely a crowd, and at the last World Cup, Ellis used her bottom two field players for a grand total of 10 minutes (all for Lori Chalupny; Whitney Engen never saw the field). In other words, we may get to the end of the World Cup with neither Krieger nor Brian having seen enough minutes to analyze them. Some are still seething at Dunn’s exclusion in 2015, but the United States won that World Cup, so the roster couldn’t have been all bad, right?

For all of the criticism Ellis takes for being too stagnant with her roster, she is certainly not above throwing us a pretty good curve ball. In this case, Krieger was the curve we saw coming while Brian was from the blind side. Two months and a few days from now we’ll know if they were generous moves, detrimental inclusions, or mere bystanders.