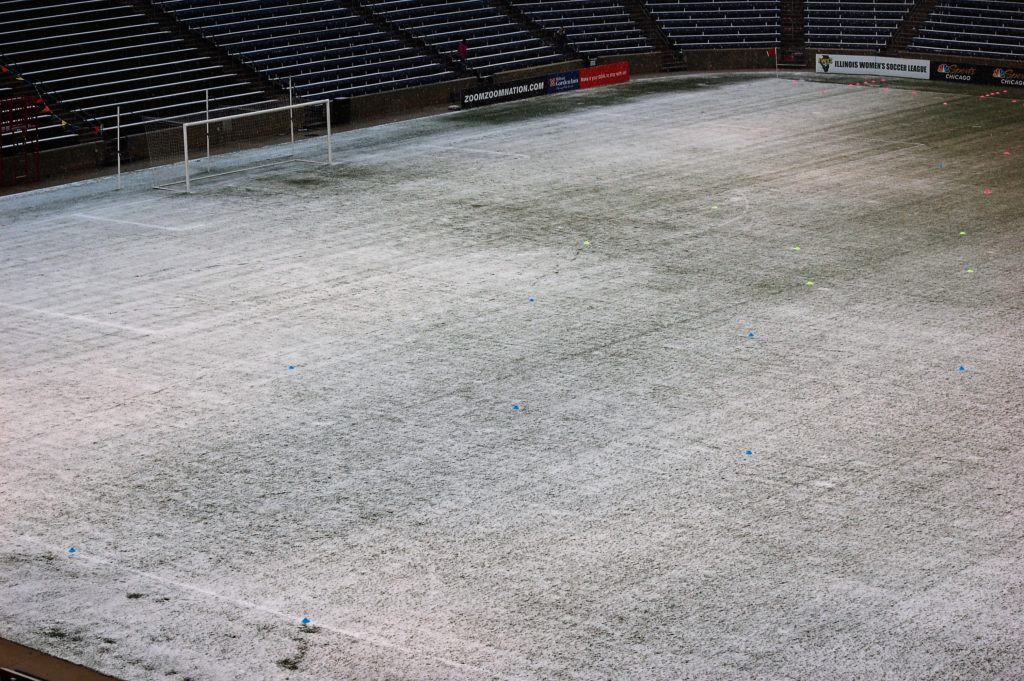 BRIDGEVIEW, Ill. — Late last week, it became evident that Saturday’s match-up between the Chicago Red Stars and Reign FC could be problematic. Forecasts as early as Thursday predicted that the weather at kickoff would be 40 degrees with a 100 percent chance of rain and 18 mile-per-hour winds at the Red Stars’ home on Chicago’s southwest side.

Just north of the city, the situation looked much worse with 5-8 inches of snowfall of projected.

On match day, the decision to go ahead as scheduled, despite the forecast, appeared to be the correct one early on. Even with a steady amount of precipitation throughout the afternoon — and a combination of rain, sleet, hail and snow — there was little accumulation on the roads surrounding SeatGeek Stadium. A picture from Red Stars’ owner Arnim Whisler posted on Twitter four hours before kickoff also showed what looked to be a playable surface.

I’m not saying it’s warm but the field is way better than the weather app predicted. ? pic.twitter.com/1hsKDdICdI

However, in the two hours before the game kicked off, conditions began to rapidly decline. The constant rain started creating areas of standing water on the pitch, which then became covered by an intense snowfall. Nearing game time, Chicago head coach Rory Dames and Whisler himself made attempts to clear the lines, but ice was already starting to form on top of the snowfall and standing water.

It appears that Chicago head coach Rory Dames has decided to clear the lines himself. pic.twitter.com/0S5QTQO5sK

I’ve been told this is owner Arnim Whisler on the shovel. Full team effort to get this game in tonight. pic.twitter.com/8GxFjmJHdX

As the condition of the field quickly deteriorated, the players and the coaches realized the game should be rescheduled, but they still needed final approval from a league representative who was not on-site.

Chicago Red Stars defender Brooke Elby, who is also the president of the NWSL Players Association, played a role in that decision.

“My role in it is just to make sure that the best interest of the players is always taken into consideration, especially when there’s an environment and conditions that aren’t conducive for the safety of all players,” Elby told the press after the rescheduled match on Sunday. “I think the league did a good job handling it. It just was a little frantic at [the time] because it’s just communicating with everybody.”

Ebly said the players realized during the warm-up that the conditions were less than ideal.

“Once we got out there, we saw it was not what we had expected. We thought and hoped that the ice would melt,” she explained.

“It’s not something that we have a lot of protocol for because we’re just — this doesn’t happen very often at the end of April. The girls were sort of in between. They wanted to play [Saturday] because now we have a short turnover for our next game, but it’s also [wanting] everybody to stay safe. I think it was a good decision.”

“Postponing the game was the right thing to do,” agreed Dames. “Player safety always needs to be the priority in the decisions that get made.”

In the past, the league has had a controversial history on weather-related decisions. Last fall, the league moved the semifinal match between the North Carolina Courage and the Red Stars to Portland only 72 hours ahead of its scheduled kickoff as Hurricane Florence approached the North Carolina coast. Several teams last year also played games in the Pacific Northwest when air quality conditions were less than ideal due to area wildfires.

Particularly in the Midwest, relying on weather reports can be a tricky proposition. Often in a matter of hours, drastic and unpredictable swings can occur. In that context, the league forging ahead with Saturday’s game doesn’t seem unreasonable.

However, the lack of a clear protocol and clear lines of communication with the league — especially considering the obvious potential for a weather delay — is troubling. It also mirrors multiple instances over the past year when teams have struggled to get approval for trades or roster announcements. Heading into week 4 of the 2019 season, the league has also still not replaced its director of communications who left this past offseason.

In Sunday’s rescheduled game, the Red Stars came out on top with a 3-0 victory, but on the financial side of the equation, Saturday’s weather and subsequent delay certainly cost them money. Whatever revenue would have been earned from potential walk-up ticket sales vanished with the weather report. And on Sunday, with limited volunteers available, Chicago was forced to limit the number who attended the rescheduled game.

While the official attendance was 2,408, it was obvious that there were only a few hundred fans actually in the stadium. What that may have cost the team in lost sales inside the stadium will remain unknown.

Moving forward, and with numerous teams in the northern reaches of the country, the league needs to establish a clear protocol and communication guidelines for cancelling games due to snow (as they established last year following the air quality issues). Making sure each team has orange balls on hand, has a plan B ready to go in case of a needed postponement, and making sure the league is prepared to respond to reports on field conditions from players, coaches and officials on site, is a must.

Lauletta: No Horan in midfield, but it was defense that failed Thorns
The Lowdown: Where each NWSL team stands as USWNT players depart