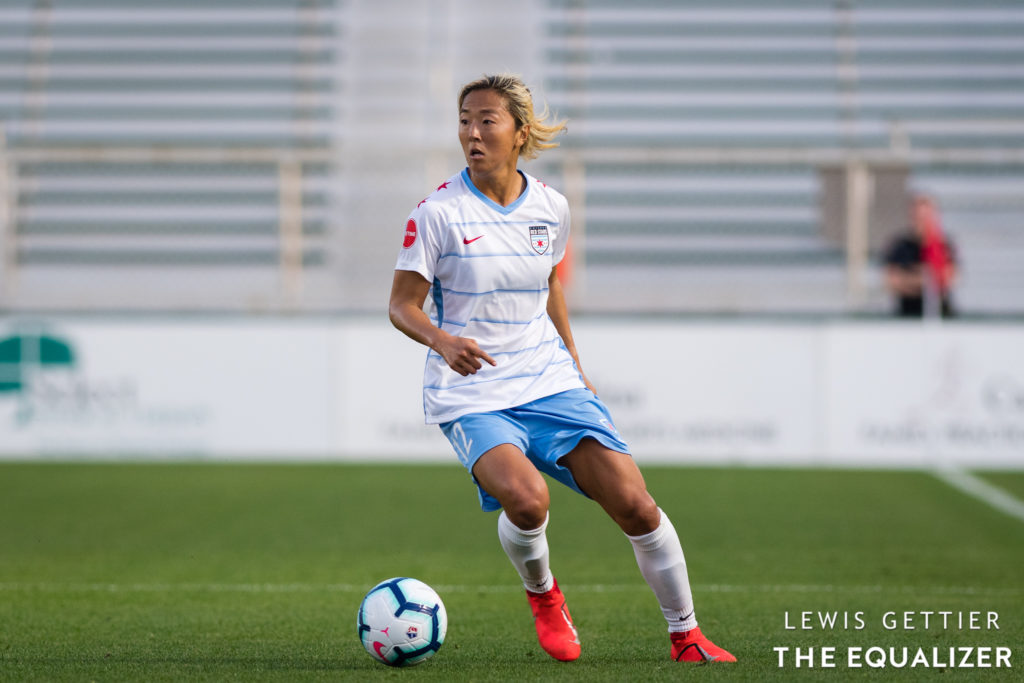 An early goal was enough for the Royals to claim victory in front of 18,000 fans in their season opener over the Washington Spirit. Vero Boquete made her debut for Utah, while Kelley O’Hara, Rose Lavelle, and Mandy Laddish all made second half appearances for their teams.

Christen Press wasted little time in getting things started for the Royals. In the 10th minute, she intercepted a pass from Paige Nielsen, rounded the defender, and dribbled her way past several players inside the box before laying off a perfect ball for Lo’eau LaBonta to run onto and one-time past Aubrey Bledsoe.

Both keepers were kept busy for the remainder of the match, an end to end game that saw plenty of chances but no more goals. Washington had several great chances late, once when Mallory Pugh beat the Utah backline only to be stopped by Nicole Barnhart, and another when a Becky Sauerbrunn foul just outside the box set up a perfect free kick opportunity that Lavelle sent wide.

Utah (1-0-0) moves up to fourth place and travels to Orlando next Saturday. Washington (1-1-0) sits behind them in fifth and does not play again until they host the Reign on Saturday, May 4.

It was a close-fought match in Jersey, but Houston scored a late goal to take home all three points on the road.

While Houston controlled the game early on, it was Sky Blue with the first real chance when Carli Lloyd was bundled over inside Houston’s box, and the referee immediately pointed to the spot. Lloyd stepped up to take the shot, and after a little bit of a delay, she sent it just wide of the post.

After that the game opened up and although both sides had chances, it seemed destined for a scoreless draw. Kailen Sheridan had a particularly good game, denying the Dash time and again.

In the 83rd minute, Rachel Daly beat Estelle Johnson to a great through ball from Christine Nairn and drew 1v1 with Sheridan. The keeper made a great kick save, but Sofia Huerta was there to clean up the rebound, helped by a deflection off Johnson.

It was by no means over, and Sky Blue kept coming, including a great rocket from distance by Lloyd that just missed the net. Daly had a chance to double the lead in stoppage time but again was denied 1v1 by Sheridan.

Also of note, Kristie Mewis made her debut after last season’s ACL tear, subbing in for Lindsey Agnew in the 62nd minute.

Houston (1-0-1) moves up to third place, pending the rest of this weekend’s games, and will host North Carolina on Sunday, April 28. Sky Blue (0-2-0) remains in eighth place for the time being and next hosts Portland on April 28.

Goals were plentiful for both clubs in the Chicago Red Stars home opener against the Portland Thorns. After feeling each other out for the first 15 minutes, the floodgates were opened in the 16th minute. Christine Sinclair added to her league total with a chip shot past Alyssa Naeher. Lindsey Horan also had a chip, assisting Sinclair’s goal with a pop-up over the Red Stars defense.

However, the lead didn’t last long.

Instead, the Red Stars won a penalty kick two minutes later. Yuki Nagasato struck her penalty right past Adrianna Franch. Two minutes later, Chicago took the lead at SeatGeek Stadium, with Sam Kerr stealing the ball right away from Emily Sonnett and earning her second goal of the season.

Ana-Maria Crnogorčević took the lead away from Chicago in the 33rd minute, sending one past Alyssa Naeher. The two sides were level heading into halftime. The match only continued it rollercoaster form from there, with four more goals in the second half.

Sinclair wrapped up a hat-trick in the second half, scoring in the 51st and 87th minute. Sinclair’s third and final goal was a penalty kick, that was awarded to the Thorns after Midge Purce was taken down inside the box by defender Katie Naughton.

All square again!@meghankling whips in a ball that finds @AnaCrnogorcevic for the slightest of touches on the equalizer.

Meanwhile, it was Nagasato that leveled the match in the end. After a second-half goal from Michele Vasconcelos, Nagasato was the last player to score for the Red Stars.

After eight goals between the two sides, referee Karen Abt signaled the end of the match. With splitting the points, Chicago now has two points to start the season, while the Thorns have acquired four points.

If you're a fan of goals.. you'll be pleased to hear that @Yuki_Ogimi has knotted this one up at 4-4 in the 90th minute. @YahooSports | https://t.co/SmhMEfYlsD pic.twitter.com/ufKK7yglr0

The definitive NWSL kit rankings of 2019
Did we just watch the best NWSL game ever?