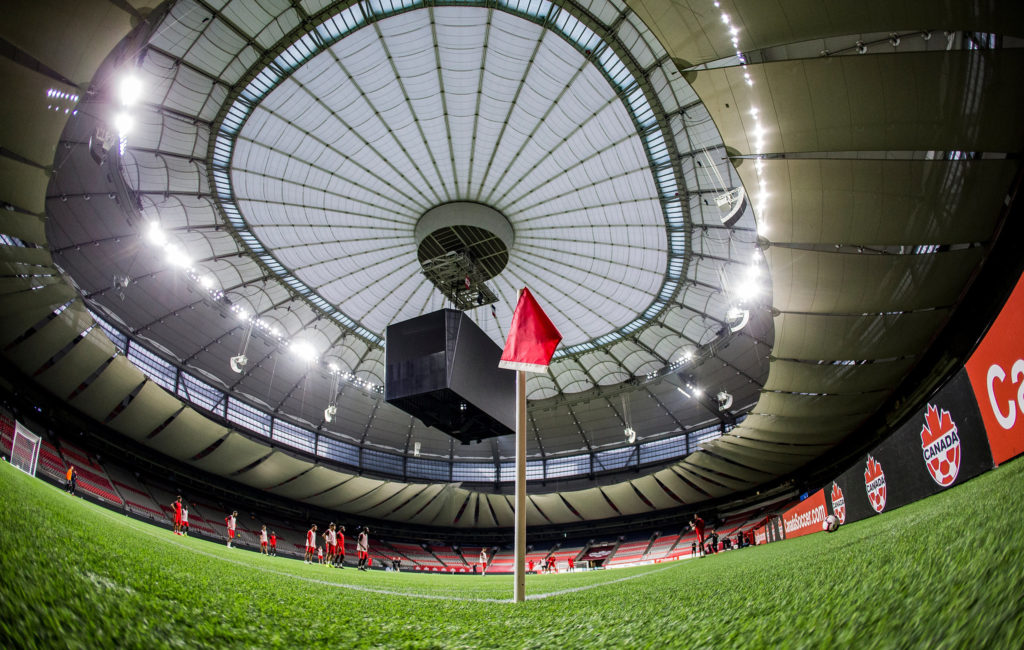 VANCOUVER — It’s a scandal that has made international headlines, has no signs of slowing down, and has more soccer players stepping forward each day. Ciara McCormack, a former member for Vancouver Whitecaps FC, wrote a blog post in February that shone a spotlight on alleged abuse in 2008 within Whitecaps FC and Canada Soccer at the U-20 women’s level.

The coach in question, who was until recently still coaching youth teams in British Columbia, is accused by a group of 13 former players of bullying, harassment and sexually inappropriate behavior toward players. Canadian legend Andrea Neil separately issued a statement regarding the 2008 investigation into the matter.

Whitecaps FC on Wednesday issued a statement saying that McCormack’s blog and the subsequent information brought forth by other players “may be new information related to this matter that did not come forward in 2008,” when the club says it conducted a thorough review. Whitecaps FC, in the unsigned letter, say that they immediately contacted the Vancouver Police Department and have maintained communication with VPD.

A group of Whitecaps supporters staged a mid-game walkout during Wednesday’s MLS match against LAFC, in protest of the club’s response (or perceived lack thereof) to the players’ allegations.

Canada Soccer issued the following statement to The Equalizer:

Canada Soccer has the highest regard for the safety of all involved in the game and has established a robust Code of Conduct and Ethics for all Canada Soccer Staff and representatives which is mandated to be implemented by our member associations.  We have an open and anonymous reporting system which includes a Whistleblower hotline that is managed by a third party.  Independent case managers are assigned to each complaint and an independent judicial body investigates where appropriate.

In addition, Canada Soccer has entered into an agreement with Respect in Sport to include training for all coaches who complete Canada Soccer coach education and has established a condition in the Canada Soccer Club Licensing program that all organizations must adhere to the Canada Soccer Guide to Safety.With respect to reports recently raised involving the Women’s U-20 National Team Program in 2008, Canada Soccer immediately responded to the concerns raised by participating in a thorough review with an independent Ombudsperson in association with the Vancouver Whitecaps.  Upon conclusion of the investigation, the coach ceased to have any involvement with the National Team Program and the Ombudsperson had no recommendations for further action.

The current Canada Soccer Code of Conduct and Ethics, independent Whistleblower hotline and Respect in Sport agreement are all measures that have been introduced to ensure the safety of all involved in the game.

Canada Soccer is aware that the Vancouver Police Department has been alerted to an anonymous website which allegedly contains further information regarding members of the 2008 Women’s U-20 National Team Program. Canada Soccer does not have further details about this ongoing matter, or on the contents or accuracy of the website, but will support all efforts should it be determined that further action is required.

The ombudsman reportedly was not hired to make any recommendations regarding consequences for the coach.

I’ve spoken with the ombudsperson. She signed an NDA with the Whitecaps + Canada Soccer so can't speak about the report’s content. But she did tell me the terms of what she was hired to do, which was; 1/ investigate, and; 2/ present facts to both organizations.

The Equalizer recently sat down with McCormack to discuss what’s happened since she first came forward with this information and what type of change needs to happen.

The Equalizer: Why wait eleven years to write your post and get this topic out in the mainstream?

Ciara McCormack: I kind of felt like the climate was a little more of a thing, where people are more open to it. The CBC article that talked about abuse in sports, that made me feel like, okay they’re recognizing now that this is a problem. That definitely played a role. I felt like I was either going to do it now, or I wasn’t going to do it at all.

The Equalizer: What do you hope comes from all the attention and feedback this story has generated?

Ciara McCormack: I think the first thing is awareness. I think that there’s sort of this sheen that comes with, whether it’s the Whitecaps level or the national team level, that people don’t really understand how powerless the athletes are. Awareness is the first thing, and I think that’s been happening a lot.

In terms of how victims of sexual misconduct, and misconduct in general respond, a lot has been said about why didn’t people tell the police, or parents. If you read up as to how sexual harassment victims respond, it’s not the first thing you’re going to do.

There needs to be a third-party organization that advocates for the players, and victims for this sort of thing. Right now, I think that’s a huge hole in the system.

I don’t think the Whitecaps should be a part of the player pathway. I think they’re a club just like everybody else. Even just logistically, B.C. Soccer and Canada Soccer are funded by the government, so they’re answerable to the government. The Whitecaps aren’t answerable to anybody, and that puts the athletes in a really massive position of risk.

I think from a player pathway structure, I think we really want that to change so the athletes are in a structure that gives them the best chance of being safe.

The Equalizer: In 2019, there are still people in place with Whitecaps FC who were there back in 2008, in the same positions. Should they be held accountable, have the same power, and jobs?

Ciara McCormack: I think anybody that was involved in any capacity in what happened in 2008, 2011, and 2017 — I don’t think they should have jobs. Part of their job is keeping athletes safe, and they’ve all failed immensely at it.

Coastal FC, they were the ones that gave [the coach] that job, that allowed him to come back into the soccer community unchecked. There’s people in that organization that worked for the Whitecaps.

The executive director at Coastal FC, the president at Coastal FC, I think anybody that was involved in the hiring of him. If they knew even of allegations, and they didn’t act on it or do more, I think they should be held accountable.

I think with Canada Soccer, we would love to see some individual accountability. They showed a lot of disrespect to what we’ve been through as players. I think they put a lot of players in danger, by allowing him back on.

The Equalizer: Who is the most to blame for everything that’s happened?

Ciara McCormack: The coach in question was horrific, but I think the bigger group of people we have a lot of anger and frustration towards are the administrators. Both the club that hired him, the Whitecaps, and CSA. All those people that just brushed this aside, and put together a sham investigation at the time, and put lots of players in danger.

I would say that, that’s where more of our frustration, and anger is directed towards. Ultimately he’s one person, and they’ve allowed this culture to just perpetuate.

Maybe if this coach goes away, but if the same people, in the same structure, are still in place. It’s just going to be somebody else in the future, and nothing changes. We’re really pressing hard for some real change to come out of this.

The Equalizer: There have been reports of an nondisclosure agreement signed by Whitecaps FC, Canada Soccer and the coach involved. Does that to you show why they’ve remained as quiet as they have?

Ciara McCormack: We’ve heard that, and we find that quite disturbing. If there was an NDA signed involving the actions towards minor players that caused this coach to be let go from the Whitecaps, and the CSA, I think it’s atrocious.

I think it points to even more so why there needs to be a full investigation into what exactly happened in 2008. I think if there was an NDA signed. That’s a clear violation of any kind of regard for an athletes well-being. I think it shows that their first priority was themselves, and the organization. The players are a very very distant third.

The Equalizer: If Whitecaps FC have the same structure involved now in 2019, should they be in a position to run a future NWSL team?

Ciara McCormack: No. I think that they really need to clean up this whole situation before they even start to talk or be given the opportunity to ever run a women’s team ever again.

The Equalizer: Do you think at some levels, there is still a toxic environment, and fear, for players if they speak out against Whitecaps FC and Canada Soccer?

Ciara McCormack: Absolutely. It’s the same people in charge, same structure, nothing has changed. I don’t think there’s any reason to think that it’s any different now.

The whole situation with the boys residency team in 2017, was only two years ago. I don’t even think it’s on the women’s side. I think the whole club, it is toxic, and it’s exemplified by the people that are running it, that have been doing these things for the last decade unchecked.

The Equalizer: What can Whitecaps FC and Canada Soccer do to help make change?

Ciara McCormack: The first thing we want is a copy of the ombudsperson’s report, because that’s been sighted by Canada Soccer and the Whitecaps, repeatedly.

That was saying that there was no recommendations, which is different to what Andrea Neil was told and what she communicated to the players. They’re not giving that up.

Again, I think there was some major wrongdoing by Canada Soccer and the Whitecaps. I think it’s a no-win situation for them in the sense that, if they talk, they’re going to be admitting wrongdoing, which is going to beg the question, how, why, and what happened with this coach in the last 11 years, that allowed him to go back out.

If they don’t say anything, I think there’s a lot of anger that’s continuing to build. An acknowledgment of wrongdoing, and allowing us to have access to the ombudsperson’s report would be a good first step.

We’re hopeful, but whether or not that’s going to happen, I don’t think we’re really holding our breath.

The Equalizer: What’s the next step for you and the players who have brought this story forward?

Ciara McCormack: I think the story is still unfolding, to be honest, in terms of people coming forward. I think we’re really not through that phase of it yet.

We’re very unified behind the scenes, absolutely. We’re all doing little bits of media, here and there. It’s a day-to-day thing to see how it’s going to continue to unfold. I definitely feel like it’s building, for sure, in terms of interest. Obviously with the World Cup coming up in two months, there’s a big spotlight on women’s soccer. It’s a story that people are interested in. I don’t see the traction falling.

The Equalizer: Has Coastal FC, Whitecaps FC, or Canada Soccer reached out to you?

Ciara McCormack: No. No. Coastal, Whitecaps, or Canada Soccer haven’t reached out to the group of us in any way shape or form to investigate this properly, and make this right.