Q+A: AS Roma coach Elisabetta Bavagnoli on the state of the game in Italy 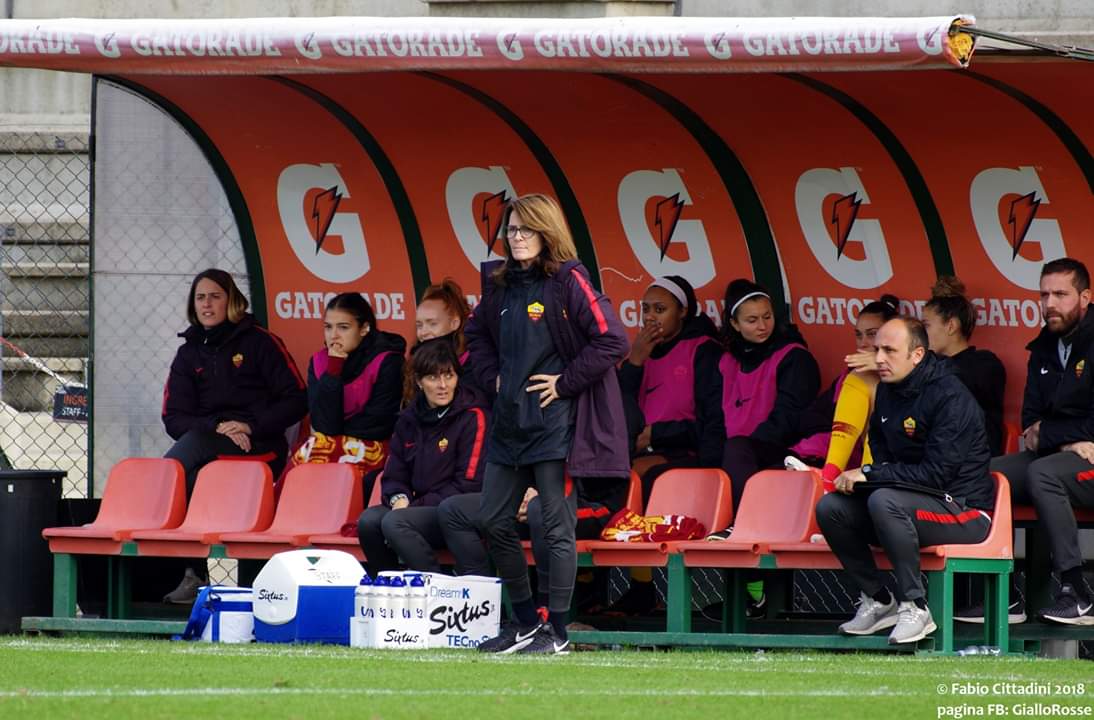 Elisabetta Bavagnoli is the coach of AS Roma’s women’s side. We previously detailed the rise of Serie A and how the improved domestic league could see Italy reap the rewards on the international level in the future. This is the full interview with Bavagnoli, who spoke with The Equalizer for that story.

What do you think were the reasons for Italy having such a strong home league in the 1980s and 1990s?

“We definitely had a lot of very good players – both Italian and foreign – during that period. It really was a time when we fought a lot of battles and secured some big achievements. Thinking back now, I have no doubt that the players of that era were proper women’s football pioneers. When we used to travel with the national team and take on stronger sides, we realized that we still had a lot of work to do to get to their level; there was a big physical difference between us and them. But we worked hard to reduce the gap and we managed in part thanks to the talent of some of our players. Unfortunately, however, we were lacking one vital thing in Italy back then: a desire to invest in women’s football.”

What are your memories of the Mundialito? When you won, did you feel like World Champions?

“I have good memories of all three editions of the Mundialito that Italy won in the 1980s. I have particularly fond memories of the 1986 edition, because I scored against China and also because we beat the USA in the final… that was a one-off. I was just making a name for myself as a footballer at that point, but I felt good. There was massive competition for places in the Italy side.”

How did it feel to be involved in the first official World Cup? Was there a lot of interest back home?

“It was really exciting to take part in the first official World Cup, not just for me but for all my teammates too. We were happy, grateful and ready to show the world that women could play football by putting on an entertaining show. I was one of the more experienced players in the squad, in the best years of my career.

“We finished in fifth place, and – given the teams we faced along the way – I think that was a very good result. We were knocked out by Norway, who were one of the best teams in the world back then. People in the industry in Italy were really excited, but there wasn’t much interest back home. Our matches only got a few lines in the papers. Thankfully, there’s more media interest in the Italy women’s side now – that’s a good thing.”

How do you think the standard of Serie A in the 80s and early 90s compares to now?

“Nowadays, the women’s teams are able to play more attractive, enjoyable football because our way of playing has really changed. We don’t play woman to woman any more, as was the case in the 1980s, and many more people are looking at tactics and contributing to the growth of the game across various different sectors.

“Generally speaking, I think the matches are more enjoyable now, though we definitely had better players in the 1980s and 1990s than we do now – I’m not just talking about Carolina Morace and Adele Marsiletti, but other top players like Susanne Augustesen. That said, the current teams have a lot more quality and invest a lot more in the players, while in my days teams basically built themselves around the talent of individual players.

“However, there’s one thing that makes all the difference in the world between the period when I was a player and now: young girls who want to play football nowadays are able to get into it fairly easily, while in my day there were no youth academies for girls, so there were fewer opportunities for girls who wanted to go down this career path.” 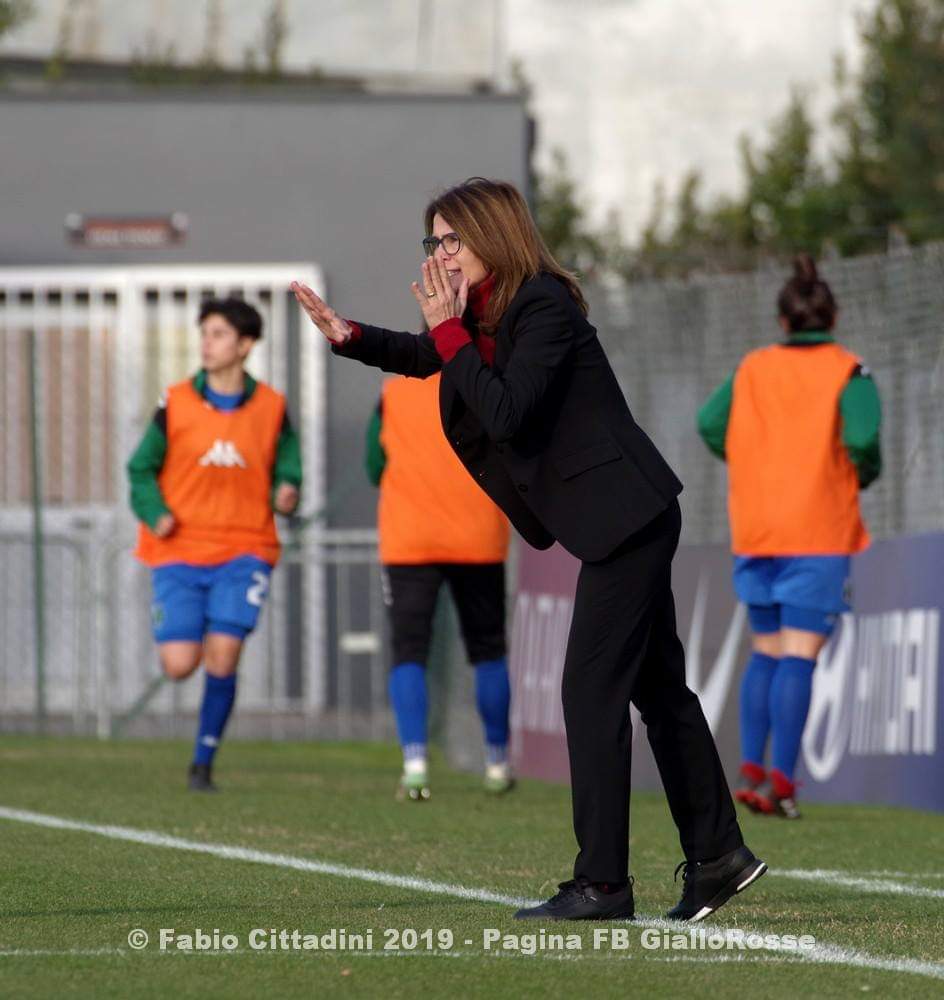 Why do you think the league began to stagnate/failed to keep up with other European nations? Or do you disagree that it did?

“In the late 1990s and early 2000s, the women’s game in Italy suffered an abrupt decline. We players realized that by looking at other countries, where women’s football was developing quickly. In the rest of the world, interest in women’s football was growing thanks to the 1999 World Cup, which was followed by lots of people all over the globe, but in Italy the momentum created by a golden generation of footballers – a generation at the end of its cycle – was fizzling out. There wasn’t really a new generation ready to take up the baton because the improvement in the quality of the Italian national team in the 1990s didn’t coincide with improvements to facilities, which would have allowed younger Italian footballers to develop their talent.”

When you look at Serie A now, with the professionalization, do you maybe wonder, “What if?” in regards to the Italian national team of the 80s and 90s and the players who were active during that time?

“That’s the biggest regret for my generation – that we weren’t able to benefit from what we have now in Italy. We have facilities dedicated solely to women’s football, qualified technical staff, media interested in reporting on the sport and fans who want to follow women’s games as well as the men. If all that had been around for my generation, I’m sure that Italy would have had more success on the international stage and that we’d be a lot more competitive now.”

Do you think Italian women’s football has the same characteristics as Italian men’s football, or is the approach very different?

“There’s only one sport of football and the approach is the same. The one fundamental difference between men’s and women’s football is the habit of playing. Boys get used to kicking a ball from a very early age, but in Italy we spent too much time thinking that it wasn’t a sport for girls. There were too many ideological barriers put up in front of girls who wanted to get into football and it’s only been in recent years that people have realised that there’s no difference between male and female footballers and that both are free to express their talent.”

How much, from your point of view, has interest in women’s football grown in Italy in your lifetime?

“I think the development of women’s football in Italy is vital. We can still do more, because in Italy footballers still aren’t recognized as full professionals and that’s going to be a fundamental step if we want the game to continue to grow.” 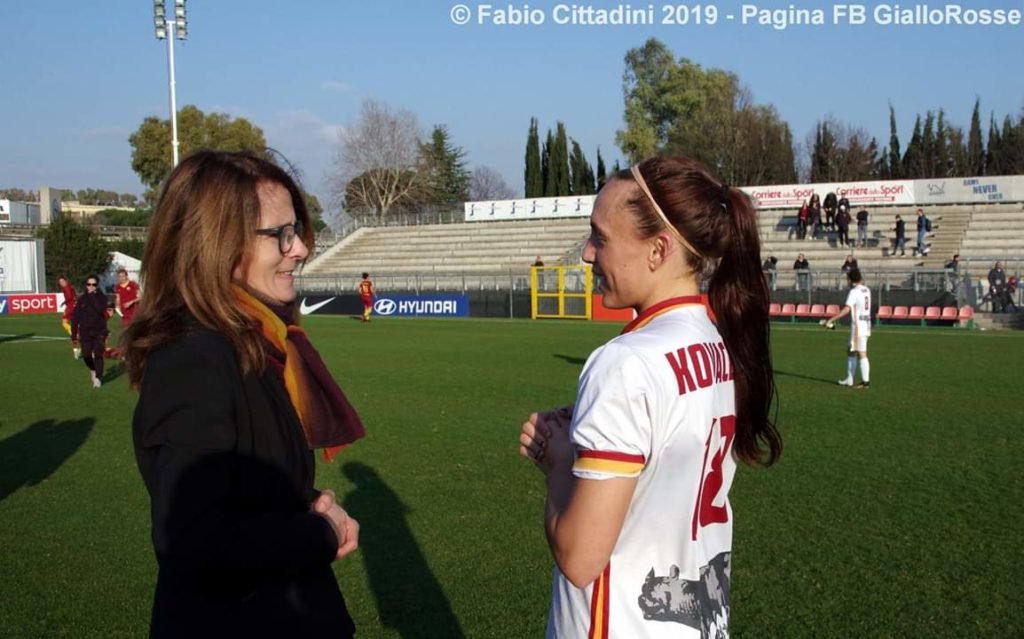 In your opinion, does the current national team have the ability to go far in the World Cup and maybe even win it? If not this year, then are the stars aligning for success in 2023?

“I think Italy can get through the group stage because we have the quality needed to cause teams like Australia, Brazil and Jamaica problems. Getting through the group would give us a lot of belief and at that point the sky is the limit for Italy – the mentality will be key to progressing further.

“In my opinion, at the World Cup in 2023 we’ll reap the rewards of the battles female footballers are fighting now. It will allow us to be a better national team. In the coming years we’ll see more girls playing football, so the quality of our league will improve.”

At a time when opportunities within women’s football were still so few, what was it that pushed you into coaching? And does it a feel a little strange to be coming up against Carolina Morace, when you worked together for so many years?

“I’ve always wanted to pass on my experience to the younger generations. I started out coaching male players before moving on to work with women. When AS Roma called me last year to see if I would be available to coach their new women’s team, I knew it was an opportunity I had to seize with both hands. It was like the end of the cycle.

“I thought back to my playing days in the 1980s, to the battles fought by my generation and what I dreamt about achieving when I grew up, and this experience with Roma has allowed me to realize those dreams. It’s exciting and a little strange to come up against Carolina – I would never have imagined us coming face to face as the coaches of opposing sides.”

Are there added demands coaching such a well-known club as AS Roma?

“Without doubt, the fact that the men’s team is so well supported has given the women’s team a lot of visibility in the media from the very start. That has pushed me and my staff to be even more focused on everything we’re doing. Roma is a cutting-edge club and they give us everything we need, so we have to take advantage of every opportunity we’re given. All this means the girls can train at the highest level, in a competitive environment, but inevitably it increases my responsibility as a coach.”

Is your biggest focus with the team on winning silverware or developing players?

“The team is formed of a lot of young, talented players, so inevitably the first step is to develop the group. That said, we’ve done very well to get to the Coppa Italia semifinals so trying to get to the final and win our first piece of silverware has become the bigger priority. That has to be the aim, after all we’ve done so far. Having said that, we have very clear ideas for next season: we want to qualify for the Champions League and test ourselves on the international stage.”

With Roma, Juventus, Milan and Fiorentina having professional teams, is there a sense in the country that girls can get into football and make a professional career?

“Absolutely. Thanks to professional clubs creating women’s teams, lots of girls can now dream of becoming professional footballers and playing for their favourite team. For the first time in a long time, there’s a lot of interest around the development of the women’s team. Let’s hope that continues to build because there are sure to be lots of challenges on the horizon.”

North Carolina to host Atletico Madrid, Lyon, Manchester City in 2019 ICC
Winners…on how to win: Inside the psychology of successful teams