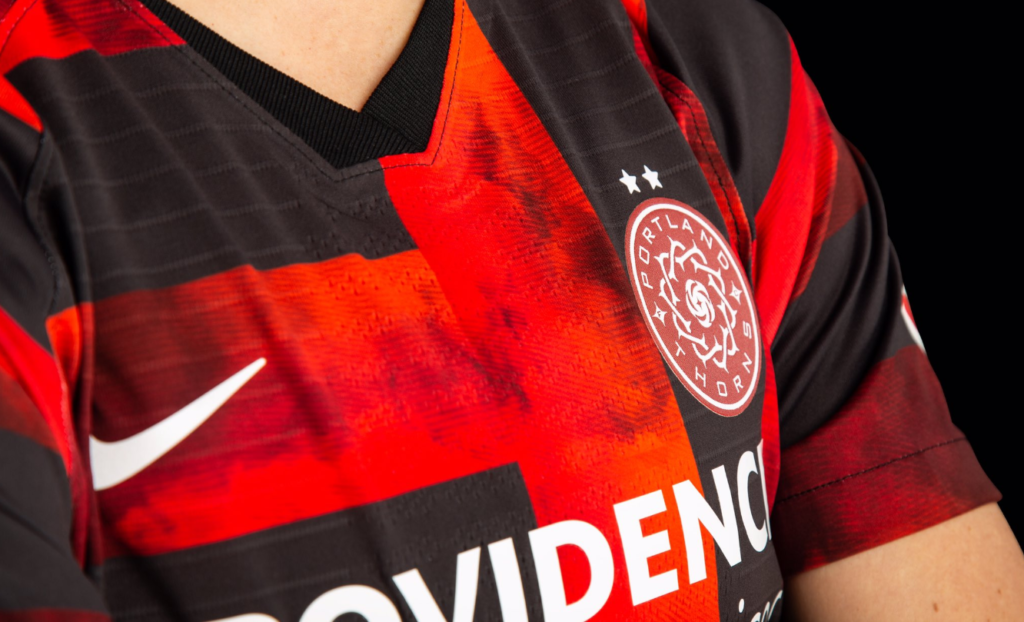 Portland Thorns FC unveiled customized home and away kits on Wednesday at a downtown launch event and, at the very least, the inspirations for the designs are pretty awesome. The kits were inspired by the City of Portland flag and the team’s fans in the North End, an energetic section filled by the Rose City Riveters supporters group.

The black-and-red primary kit plays off the interlocking design of the city’s flag, and both kits feature subtle smoke details as a nod to the common sight of support at Providence Park. Rose stems are detailed on the back neck of the jerseys and the back of the socks.

The primary kit is inspired by the Portland flag, with a smoke pattern in the red stripes #BAONPDX #NWSL pic.twitter.com/oIn9tj16u0

Those socks tho #BAONPDX #NWSL pic.twitter.com/LZQrcpDvA6

The white secondary kit also has a smoke pattern, and both have this vine motif on the back #BAONPDX #NWSL pic.twitter.com/oYBDzmaBk8

Portland also had a custom design in 2015, though with less detail. This is the most detailed customization of a National Women’s Soccer League jersey to date. The league is in its seventh season, but most clubs still wear stock kits or modifications of them, an example of the latter being the Utah Royals’ new alternate kit.

#NWSL kit alert ? @utahroyalsfc are droppings ? ? on their away kit.

Providence Health & Services remains as the Thorns’ official jersey sponsor — as it has for the entirety of the team’s existence — while Jersey Mike’s Subs enters its first year as a sponsor featured on the back of both the primary and secondary jerseys.

The red-and-black look means one less team wearing a uni-colored stock primary kit in 2019, and that’s a good thing.