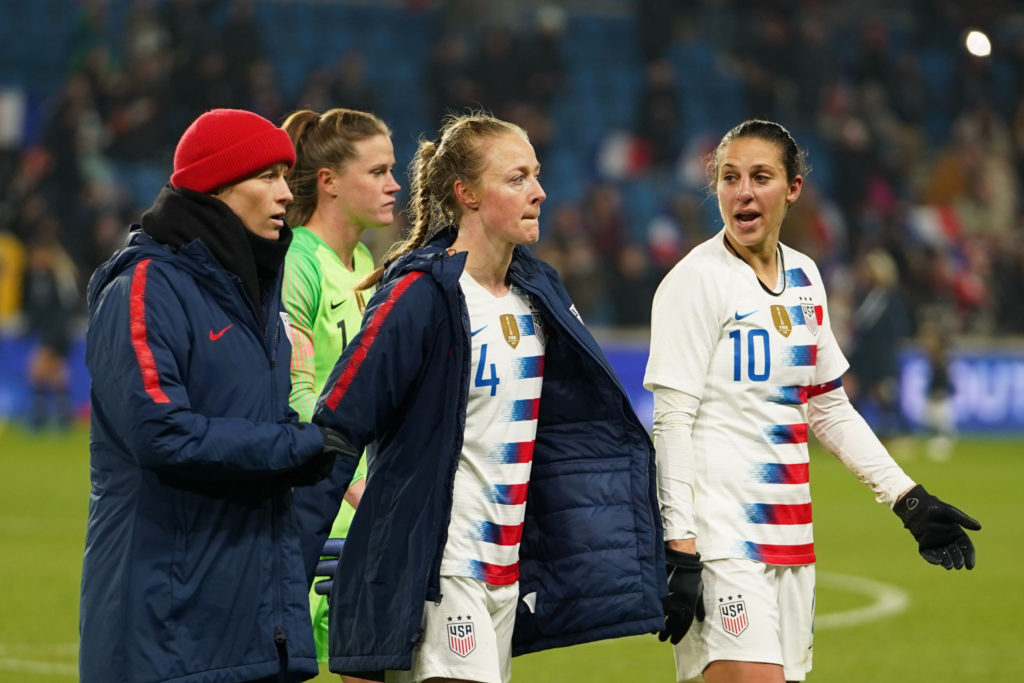 The lawsuit, filed in U.S. District Court in Los Angeles, accuses the federation of “institutionalized gender discrimination,” including paying female players less than their male peers despite performing the same job. The lawsuit also cites ongoing federation policies and practices as systemic gender discrimination, including travel conditions, promotion of games, and coaching and medical staff. The entire lawsuit can be read here.

“The bottom line is simple: it is wrong for us to be paid and valued less for our work because of our gender,” U.S. defender Becky Sauerbrunn said in a statement. “Every member of this team works incredibly hard to achieve the success that we have had for the USSF. We are standing up now so that our efforts, and those of future USWNT players, will be fairly recognized.”

The class action lawsuit seeks to represent any current or former women’s national team player who was on the team from Feb. 4, 2015 through the date of final judgment.

One point highlighted in the lawsuit is that the U.S. women, as international soccer players representing the federation, perform the same duties as the men’s national team players, but spend more time playing, practicing, traveling and participating in media sessions. The U.S. women played 19 more times than the men from 2015 to 2018, for example. (The U.S. men’s teams failure to qualify for the World Cup at least partially influenced a lack of matches in 2018.)

According to the lawsuit, the USSF “continually rejected” the women’s national team’s request for equal pay and in 2012 offered to compensate women’s players only if they won games against FIFA-ranked top-10 teams, but not for losing or tying matches, nor for beating teams outside the top 10 of world rankings. The lawsuit also states that in 2016, a representative of the USSF said “market realities are such that the women do not deserve to paid equally to the men.”

Additionally, the lawsuit mentions that the women’s team is subject “to matches on inferior surfaces at a rate far in excess of that required of MNT players,” a sticking point that dates back years and continued following FIFA’s decision to play the 2015 Women’s World Cup on artificial turf. Per the lawsuit, USSF arranged charter flights for the U.S. men’s team at least 17 times in 2017 but did not do so once for the women.

Five U.S. women’s national team players filed a wage-discrimination complaint with the Equal Employment Opportunity Commission in 2016. That has dragged on without any resolution or tangible update. Per The New York Times, the decision to file this class-action lawsuit effectively ends the EEOC complaint. On Feb. 5, the EEOC issued plaintiffs Carli Lloyd, Alex Morgan, Megan Rapinoe and Becky Sauerbrunn rights to sue.

U.S. Soccer and the U.S. women’s national team signed a new collective bargaining agreement in 2017 which made improvements to compensation and minimum working conditions, among other things.

Sauerbrunn and Kelley O’Hara were on Thursday re-elected by the USWNTPA’s membership to serve on the executive committee. Sam Mewis was elected to replace Christen Press, who did not run for reelection as an officer.