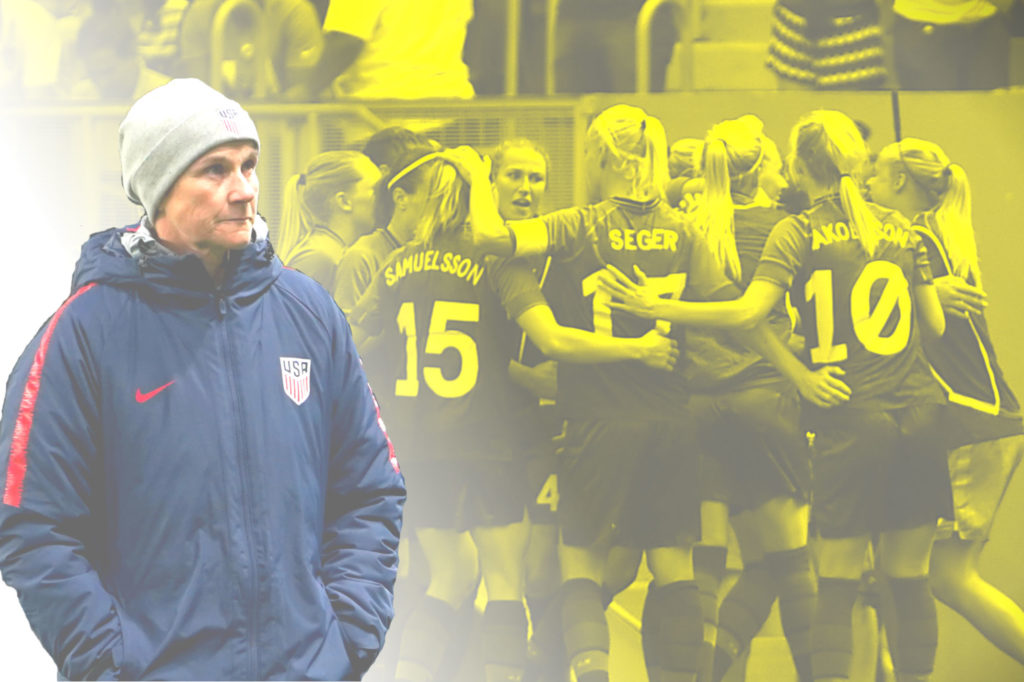 The ghosts of Sweden tell the tale of Jill Ellis’ tinkering

The ghosts of Sweden tell the tale of Jill Ellis’ tinkering

Three months out from the 2019 World Cup, the United States women’s national team is in a funk.

And believe it or not, a significant cause of that trouble may be a loss sustained to Sweden nearly three years ago.

In 2016, the U.S. infamously lost in the Olympic quarterfinals to a Pia Sundhage-coached side that bunkered in defensively and looked to strike on the counterattack — a set of tactics that both minimized Sweden’s exposure to the Americans’ greatest offensive threat and took advantage of the U.S.’ biggest defensive weakness. Ever since, United States head coach Jill Ellis has been obsessed with finding a game plan which would prevent that from ever happening again.

At first, Ellis became convinced she needed to find a formation that pushed another player into the attack to break down a low block, like the one Sweden had used. And to be fair, the U.S. had struggled against such defensive tactics on repeated occasions — even when employed by weaker Concacaf sides.

In the months to follow, Ellis tossed out the modified 4-2-3-1 formation that the Americans had used in the Olympic Games and, in the fall of 2016, began implementing various versions of a new three-back system. She had nearly three years until the 2019 World Cup; it was the perfect time in the cycle to experiment with new ideas.

That tinkering worked well in friendlies against Switzerland and Romania, but in the 2017 SheBelieves Cup, France badly exposed the gaps in Ellis’ new look — and particularly the decision to employ Allie Long as a center back.

Over the rest of the spring and summer, the coach abandoned the three-back and returned to a more traditional and comfortable 4-4-2. However, as the team plodded ahead, it lacked dynamism and, following a loss to Australia in the opening match of the Tournament of Nations that July, Ellis moved the team to a 4-3-3.

That switch, in and of itself, didn’t prove to be a solution as the U.S. promptly went down in the first half of their next match against Brazil. But then something important happened — a final step in the process.

Access the best women’s soccer coverage all year long
Start your FREE, 7-day trial of The Equalizer Extra for industry-leading reporting and insight on the USWNT, NWSL and beyond.
Subscribe
Existing Users Sign In Here
Related Topics2019 SheBelieves CupExtraFeaturedJill Ellis