Finally, Adrianna Franch gets her first cap — and a valuable lesson 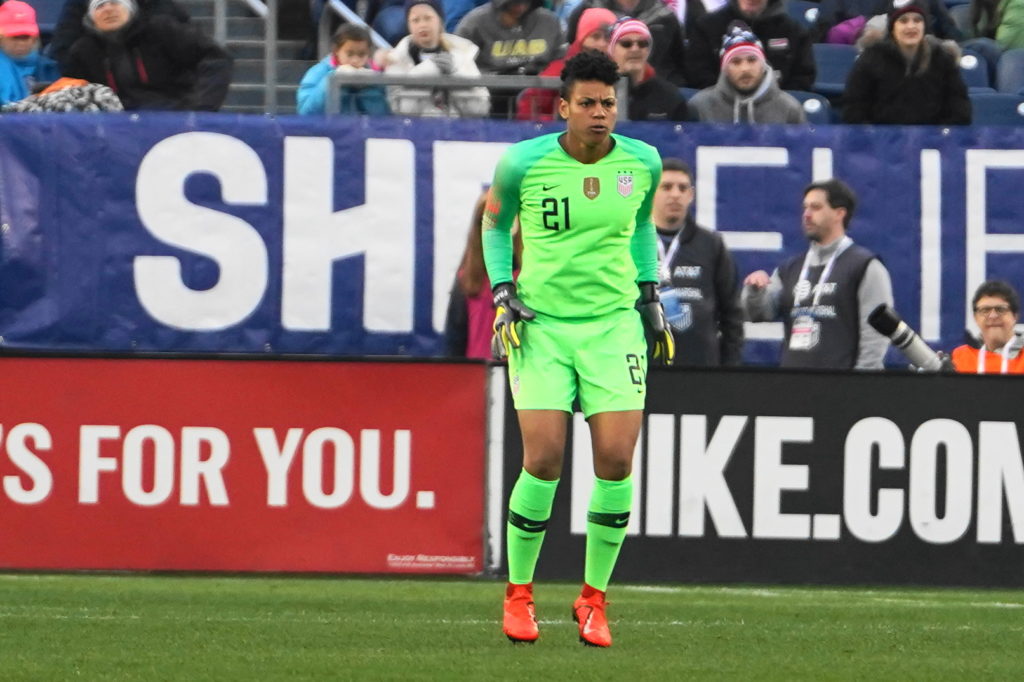 NASHVILLE, Tennessee — U.S. women’s national team fans potentially got a glimpse into the future as goalkeeper Adrianna Franch made her much awaited senior team debut on Saturday in a 2-2 draw with England.

Franch was thrust into the starting lineup against the world’s fourth-ranked team at the SheBelieves Cup at Nissan Stadium after starter Alyssa Naeher was ruled out of the match due to a shoulder injury. Naeher was slated to start all three matches at the fourth annual tournament, but picked up the injury in Wednesday’s 2-2 draw against Japan.

“I had committed to giving Alyssa all three games in this tournament,” U.S. coach Jill Ellis revealed post-match. “It was a decision. And at some point it’s getting an opportunity — whether your hand is forced or not –i t’s an answer we wanted and needed, and wanted to have a player have a cap.

“AD, she has been really good in training. I’ve obviously seen Ash[lyn Harris]; she has caps. It was a situation where [we’re] giving AD an opportunity. Other than the one error of picking up the ball — which again, is a valuable frickin’ lesson — the reality is, I thought she had a good presence in there and kicking game. I thought for her first game, she was solid.”

That lesson Ellis spoke of came 10 minutes after halftime, when Franch picked up a long back-pass from Mallory Pugh which split two U.S. defenders. An indirect free kick was awarded to England inside the box, and skipper Steph Houghton curled a beautiful shot inside the far left post to tie the match 1-1.

“Just a little mishap, and we learn from it,” Franch told The Equalizer postgame.

Still, Saturday afternoon was a dream come true for the Portland Thorns FC keeper, who wore ex-U.S. goalkeeper and World Cup champion Briana Scurry’s last name on her back as part of a U.S. Soccer initiative.

“It’s always a great feeling to get the call up,” Franch said. “We’re representing the names on the back of our jersey. It’s not the result that we wanted. We learn from it and we move forward.”

“The goalkeeper position is hard. At the end of the day, all three of us or whatever goalkeeper is in or out, you have to be prepared. That’s what we work for everyday. As a team, we didn’t get the result that we wanted, but we’ll move on from it.”

What an answer from the @Lionesses! ?

The error looked basic on the surface level, but the situation was unique given where the pass came from and how the defenders moved away from the ball.

“It’s pretty rare,” said Becky Sauerbrunn, who came off the bench as she recovers from a minor knee injury. “I was on the sideline and I was watching it. I feel like maybe that could have gone either way. You can say that it wasn’t a direct back pass to the goalkeeper. It was kind of an in-betweener. It’s unfortunate.”

“I think this is her first cap, this is a tough game to come into for it to be your first cap. She handled it pretty well, and unfortunately that was something that you’re going to learn from and probably never do again.”

EXTRA: At 33, Marta is still showing the way for Brazil

The U.S. never looked locked in and ready to battle the Lionesses. Link-up play in the midfield was absent. The back four was slow to react; Megan Rapinoe, Tobin Heath and Alex Morgan were on an island without service. Crystal Dunn is still wondering how Nikitia Parris got past her for England’s second goal.

All those minor miscues add up, and put massive pressure on a goalkeeper — especially one making her national team debut. The U.S. will look to get back to the basics when they take on Brazil on Tuesday night at Raymond James Stadium, in Tampa, Florida, in the final match of the tournament.

“We keep learning from our mistakes,” Franch said, turning her focus to Brazil. “Honestly, we did a lot of good things out there. It’s not good enough; it’s not the result we wanted. We need to fine tune the different things that we didn’t do well, what we want to do better, and work on them.”

“I’m obviously extremely familiar with AD; she’s the best,” Heath said. “I get to see her day in, and day out. I think on the free kick, that was a little bit of an unfortunate error. I don’t think she knew that it came off of Mal, obviously.”

“Those are situations we can face in a World Cup so it’s good. We’ve got a picture of something that we can learn, work on and that’s what we’re taking from this. We have to grow and we have to take these opportunities to get better, because this has been the finish line for us.”

Looking ahead to Brazil, Franch isn’t sure if she will get the nod in net.

“That’s up to the coach,” said Franch.

The USWNT is overthinking how to utilize Julie Ertz
The Equalizer Podcast, Episode 49: Looking lost out there