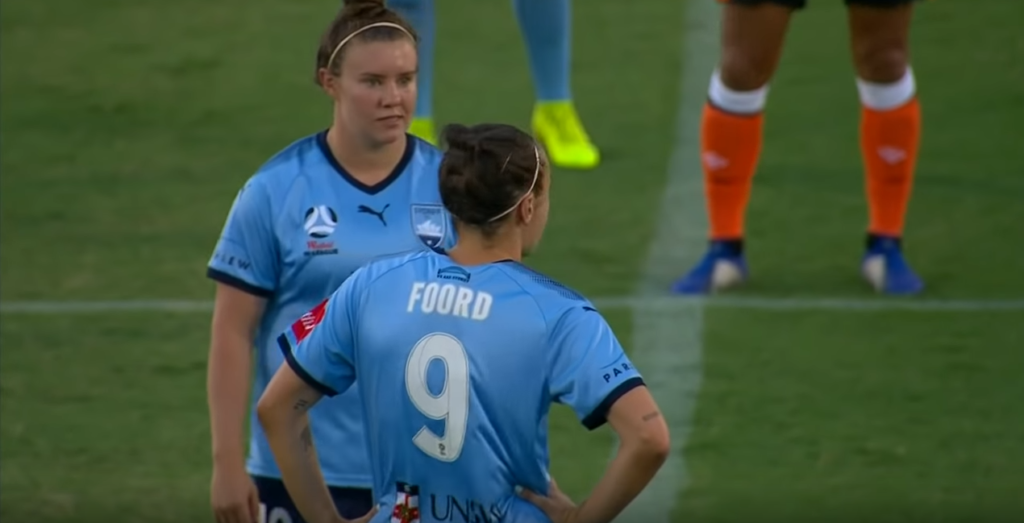 The 2018/19 Westfield W-League Grand Final will pit No. 3 seed Sydney FC against No. 4 Perth Glory, as both sides went on the road to dispatch the higher seeds: No. 2 Brisbane Roar and No. 1 Melbourne Victory, respectively, on Feb. 10.

In front of a season-high AIMI Park crowd of 8,599 in Melbourne (part of an A-League doubleheader), Perth Glory used a Sam Kerr hat-trick to make it into their third W-League Grand Final in five years with a 4-2 overtime win over the Melbourne Victory.

Melbourne opened the scoring through Christine Nairn (Orlando Pride) in the second minute from a tight-angle shot that Australian international goalkeeper Eliza Campbell couldn’t keep out of her net. Melbourne’s defense was superb through most of regulation time until Kerr scored her first goal in the 72nd minute. Rachel Hill then gave Perth the lead from a Kerr assist in the 86th minute. Nineteen-year-old Grace Maher rescued Melbourne with a goal from a close-range header in the box in the fourth minute of stoppage time to end regulation, 2-2.  Two more Kerr goals in the 97th and 107th minutes in extra time clinched the win for Perth.

Two crucial factors contributing to the upset loss for Premiership winners Melbourne Victory were that starting goalkeeper Casey Dumont had to be substituted at the start of the second half for a concussion that she received during the first 45 minutes. Her replacement, Bethany Mason-Jones, was playing her first minutes of the season and only in her eighth game across three seasons for the Victory; unfortunately for her, Perth scored all four goals after she entered the match against a side that had only allowed 15 goals in 12 regular season games.

Defender Samantha Johnson (Utah Royals) was sent off for a second yellow card in the 97th minute, further hurting Melbourne in their efforts to hold back the Perth offensive onslaught.

In the other semifinal, Sydney FC made it three wins out of three this season against host Brisbane, defeating the Roar 2-1 in front of a crowd of 4,271. Caitlin Foord (Portland Thorns) scored her 10th goal of the season and Sofia Huerta (Houston Dash) scored added her third. Six of Foord’s goals have come against Brisbane. Japanese international Yuki Nagasato (Chicago Red Stars) scored late in second-half injury time to reduce the deficit in half, but it wasn’t enough for Brisbane.

The Roar fell at the semifinal stage for the second consecutive season, losing last year at home to Melbourne City (2-0). Roar captain Clare Polkinghorne said after the match that the number of youth players that the side used this season is a positive, but that Sydney had too many chances to score in the game (18 shots versus 9 for the Roar):

Kerr’s hat-trick was the first ever in W-League playoff history.

Nine of the twenty-two W-League semifinals in the history of the league have now gone into extra time.

Sydney FC is trying for its third Grand Final win in their sixth W-League championship game, having lost last season to Melbourne City (2-0) as well as in the 2015/16 Final (4-1). Perth has never won a Grand Final in two previous appearances.

The English international forward guided Melbourne Victory to their first ever premiership title. She led the team with nine goals, tied for second in the league with Caitlin Foord (Sydney FC and Portland Thorns) and Veronica Latsko (Adelaide United and Houston Dash).

Dowie’s leadership was exceptional in this turnaround season for the Victory and she was always focused on team performance. Without the all-time club leader in goals after four consecutive seasons with the Blues, the Victory would not have been nearly as successful this season.

Twenty-one-year old Libby Copus-Brown scored her first ever W-League late in the game against Sydney FC on January 4. Copus-Brown ran onto a loose ball 10 yards outside of the penalty box and shot it into the upper left corner of the goal over Sydney goalkeeper Audrey Bledsoe (Washington Spirit). The goal was a high point for the Jets in their ultimate 3-1 defeat.

What a way to score your debut goal in the @WLeague from @NewcastleJetsFC's Libby Copus-Brown's!

Veronica Latsko, the first-year W-League import from the Houston Dash, scored nine goals and tied for second best in the league behind Perth Glory’s Australian international Sam Kerr’s 13. Latsko’s scoring was crucial to her club’s record season totals of five wins and 18 points, finishing one point shy of the final four. She accounted for 53 percent of her team’s 17 goals, with two multi-goal games and three game-winners.

Defender—Clare Polkinghorne—Brisbane—The Houston Dash center back has over 100 caps for Australia and 125 games with the Roar, playing with the Roar for all eleven seasons in the league. She reads the game tremendously well and contributes to the offensive transition for a team that plays primarily out of the back.

Defender—Rachel Corsie—Canberra United—The Scottish international captain and Utah Royal loanee came to the W-League for the first time to keep active ahead of her country’s debut at the World Cup next summer; she was instrumental in providing solid defense for a team decimated by injuries.

Defender—Ellie Carpenter—Canberra United—The Portland Thorns loanee scored three times and was hugely impactful on the wing; her future looks very bright for the Matildas’ and the Thorns.

Midfield—Christine Nairn—Melbourne Victory—The U.S. international at all levels and Orlando Pride loanee scored 5 times for the Premiership-winning Victory; the club’s second highest total behind Natasha Dowie and tied for fifth best in the league with Brisbane Roar’s Allira Toby.

Forward—Sam Kerr Perth Glory—The Chicago Red Stars forward won the W-League Golden Boot for the second consecutive year—both seasons with 13 goals—and was the go-to player for Perth as they returned to the playoffs after missing out in 2017/18.

Forward—Caitlin Foord Sydney FC—The Portland Thorns loanee finished with nine goals and, on current form, will be a key force for the Thorns this season and the Matilidas’ in France.

Forward—Tameka Butt—Melbourne City—She scored three goals and was another new addition from Brisbane who helped to stabilize the ship in rough seas this campaign for her new club.

Goalkeeper—MacKenzie Arnold—Brisbane Roar—The Australian international goalkeeper is bound at some point to replace Lydia Williams as full-time starter and she was a steadying influence on a team that didn’t score as frequently as others, but had the third best goal-against record in the league and was always ready when called upon to make a key save.

Defender—Lauren Barnes—Melbourne City—The Seattle Reign original was key in the back again in her third season with City and fifth in the W-League. Her club tied with Melbourne Victory for the best team defense (15 goals allowed)

Defender Jenna McCormick—Brisbane Roar—McCormick joined the Roar this season from Adelaide United and made a good defense that much stronger with her confident heading and deft ball skills from the back. She plays two football codes each year, also lining up as a forward for the AFLW Adelaide Crows, which she helped to a Premiership title in 2017 in the first year of the new footy league.

Defender—Rebekah Stott—Melbourne City—The New Zealand international, who played with Sky Blue FC last season in the NWSL, was hugely effective in the back in her fourth season with the three time W-League champions.

Defender—Alanna Kennedy—Sydney FC—This versatile defender from the Orlando Pride contributed three goals and is a key leader for the Sky Blues and the Matildas’.

Midfield—Gema Simon—Newcastle Jets—The eleven-year W-League veteran and former Ottawa Fury player was a key stabilizer for a club that fought through a number of injuries this season, including to U.S. international wing-back Taylor Smith.

Midfield—Yuki Nagasato—Brisbane Roar—The Chicago Red Stars loanee and Japanese international impressed followers in her first W-League season, scoring three goals and providing outlets from the back for her defense.

Midfielder—Refiloe Jane—Canberra—The first-year player from South Africa helped her national team qualify for their first ever Women’s World Cup while turning heads in the W-League with her silky skills, contributing two goals early in the season.

Midfield/Forward—Chloe Logarzo—Sydney FC—She scored three times and linked well with Foord up front all season and will be one to watch in France, as she seems a shoo-in for a spot in the side. Logarzo played in the now-defunct W-League with the Colorado Pride before playing in Sweden and Norway.

Forward—Savannah McCaskill—Sydney FC—The U.S. international and Sky Blue FC loanee traded light blue jerseys and contributed three goals and width to this high-powered attacking side all season, which tied Perth for most team goals in the season with 28.

Forward—Emily Gielnik—Melbourne Victory—The Australian international doesn’t always get the attention of other players but scored four times for the Premiership winners and had a world-class strike against Chile on Nov. 13 for the Matildas’ in their 5-0 win, after dropping the first match of the series 3-2, with both matches at home.

The final match of the season between Melbourne Victory at Canberra United was played on Feb. 5, delayed from Round 12 after it was suspended at the 16-minute mark due to thunder; the replay finished in a scoreless deadlock and started 40 minutes late, again for inclement weather.