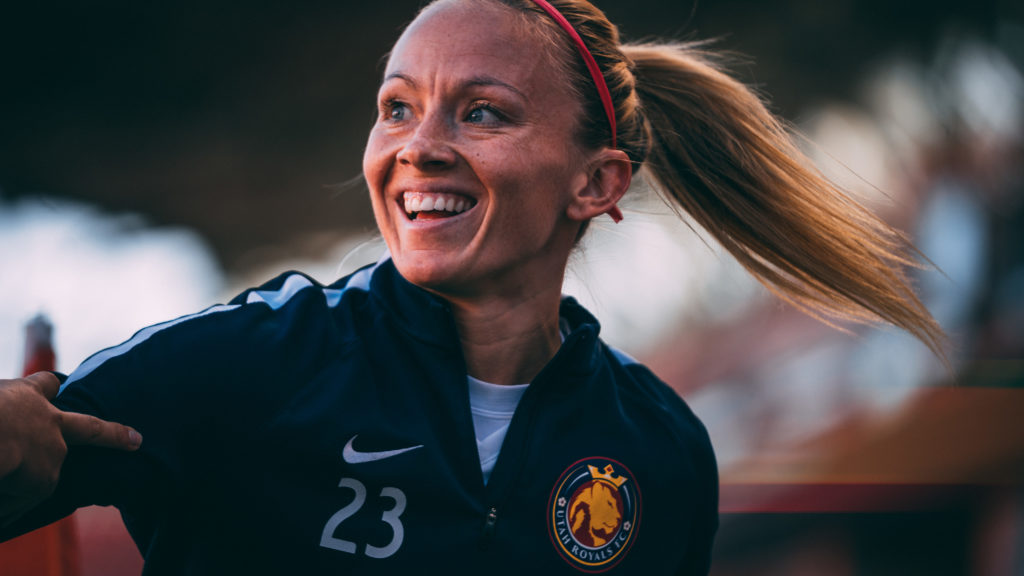 We look at the highlights from the Westfield W-League in Australia for Week 14, with Melbourne Victory winning the Premiership title while Brisbane, Sydney FC and Perth Glory are set for next week’s semifinals.

Icelandic international midfielder Gunnhildur (Gunni) Jonsdottir, the Utah Royals loanee in her first year in the W-League, scored her only goal of the season and the sole tally in the game for a 1-0 Adelaide United victory at home over the Brisbane Roar on February 1. Jonsdottir scored on an uncontested header to the far post from Australian international defender Emily Hodgson’s cross. Japanese international Yuki Nagasato saw her late penalty saved by Red’s goalkeeper Sarah Willacy, which ultimately cost Brisbane at least a tie. Adelaide set team records for wins (5) and points in a season (18) and fell just one point short of their first playoff bid in team history (albeit with a considerably lower goal differential of -2 to +8 for Perth).

“Progress not perfection,” and now @AUFCWomen demands respect and has a new culture in place. Thank you @i_karlovic, @AdrianStenta, all the staff involved on the field and behind the scenes, my teammates, and fans, for welcoming me and providing an amazing experience…

Tessa Tamplin, a 17-year-old local product, showed poise well beyond her years in scoring her first W-League goal in the 43rd minute to start the Jets off in what was ultimately a 4-1 home win over the Western Sydney Wanderers on February 2. Tamplin, who was signed at the beginning of the year from the Jets’ Academy, took an outstanding penetrating ball from six-season Jets midfielder Clare Wheeler to break in uncontested from 30 yards on Wanderers’ Australian U-17 keeper Nicole Simonsen, burying the ball into the net after one touch. Before the game Tamplin, who played in the Jets Academy for a half dozen years, was asked what advice she would give to other Jets Academy players who are 11-12 years old and wanted to play in the W-League; she replied: “Work hard, always stay positive and keep your eye on the prize as you never know what will happen or what age it will happen for you.” Even with all the Australian internationals and those from other countries who have graced this league in its eleven seasons, a core reason for its launch in 2008/09 was to give talented youngsters a chance to play high level soccer and develop future generations of national team caliber talent. It’s good to see that the teams’ efforts to promote their Academy players at a young age yields such positive results. With the win, the Jets closed the season with three wins out of their last four games.

One-on-one with the keeper, Tessa Tamplin kept a cool head to score her first #WLeague goal and put the Jets into the lead! #NEWvWSW #MadeOfNewcastle pic.twitter.com/Q5UxG6j6GD

Save of the Week—Lydia Williams (Melbourne City)

The Australian international and Seattle Reign loanee made two tremendous saves in the match for Melbourne City’s 2-0 away win over Sydney FC on January 31, the first coming in the 9th minute when she denied Princess Ibini, who broke in on goal alone from 35 yards after a slip pass from Savanah McCaskill (Sky Blue FC). Williams then topped that effort when she robbed Sofia Huerta (Houston Dash) of a sure goal from a long shot towards the upper corner, but the goalkeeper punched the ball away with an outstanding save with fine positioning. At that point, City was ahead only 1-0. City scored a late goal from Tameka Butt but needed 5 clear goals to advance to the finals. Their historic run of three Grand Finals Wins in their first three seasons is over. Three points in their first five games left them with too much to chase in the end. One wonders if the return of Welsh international Jess Fishlock (on loan at PSG) and Australian international Aivi Luik (Levantes of Spain) would have helped them advance, particularly when they stuttered early out of the gate.

On the night, City had almost 70% of the possession and a 30-6 shot advantage (11-2 on target) compared with Sydney FC on a rainy and windy night.

Christine Nairn (Orlando Pride) scored her fifth goal of the season and assisted on Emily Gielnik’s fourth goal of the campaign to stake Melbourne Victory to an early 2-0 lead away to Perth on February 1. The Victory held on to win 2-1 and captured the Premiership Plate (Regular Season Championship) for the first time in team history and are the top seed throughout the playoffs. The teams will turn around and meet again in the semifinals in Melbourne on Saturday, February 9.

Perth’s Sam Kerr won the W-League’s Golden Boot again for the second consecutive season—both times finishing with 13 goals—with her second half goal against Melbourne Victory in their 2-1 loss. There were some nervy moments after Melbourne went up 2-0 in the 35th minute as a loss by Perth by 5 clear goals would have sent them out of the playoffs, with City replacing them.

For the semifinals, Melbourne Victory did the double over Perth Glory with two 2-1 wins this season. Brisbane Roar will host Sydney FC, who defeated the Roar 5-1 at home and 3-1 in Brisbane.

Next week, we will cover the semifinals and present our player awards, including first and second all-league teams from the 2018/19 W-League season.