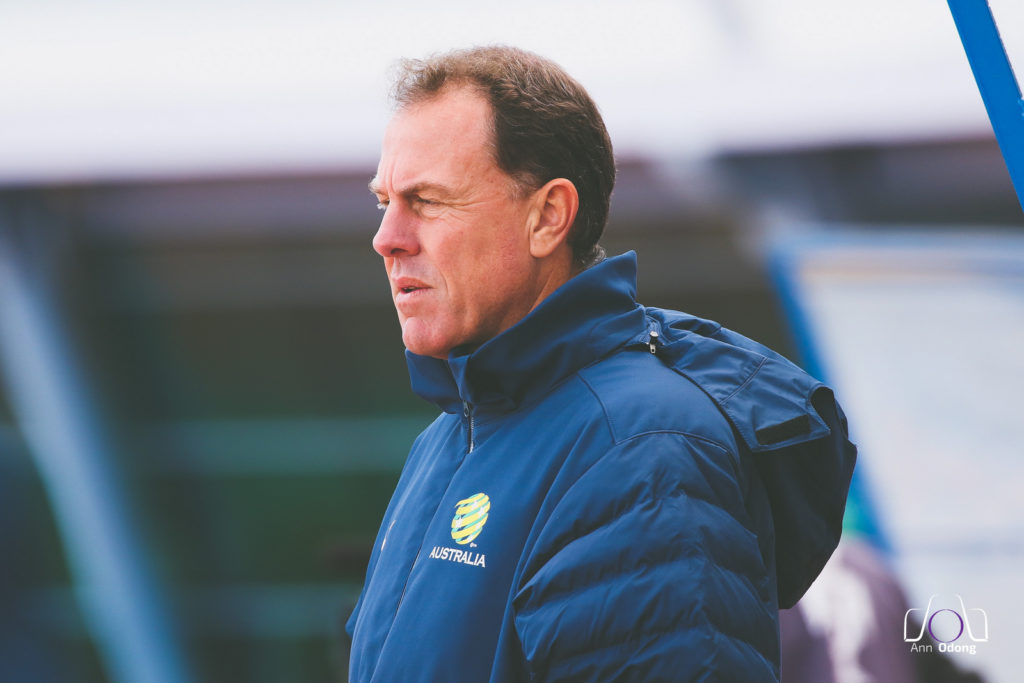 We look at the highlights from the Westfield W-League in Australia for Week 12, which saw Haley Raso return to the field with Brisbane after her long injury layoff and Alen Stajcic forced out as Matildas’ coach.

The biggest women’s soccer story from Down Under, during a very busy week, was that the Australian Football Federation (FFA) terminated Alen Stajcic as their national women’s national team coach, with his assistant coach, Nahuel Arrarte, resigning shortly afterwards. At root for the dismissal was FFA dissatisfaction with the team culture that Stajcic was overseeing, driven by some Matildas’ complaints about his leadership.

The FFA investigated Stajcic via two confidential surveys as well as interviews with players and staff, deciding that a change was needed to improve the team environment. Early this past week, a reporter in Australia told me via a telephone conversation that pressure was building on Stajcic and that the question was whether he could survive through the Cup of Nations friendly tournament that Australia was hosting next month, much less the Women’s World Cup, which begins this June. The reporter felt that the “storm of discontent could take him down.” The storm enveloped Stajcic much sooner than expected.

Ironically, Stajcic was named head coach in 2014 just before the Women’s Asian Cup and World Cup qualifiers, following the dismissal of Dutch coach Hesterine de Reus, who in a short time had turned many of the Matildas’ against her with her authoritative management style. Stajcic, who had been coaching Sydney FC’s women’s team the previous six seasons and had two Grand Finals victories, guided the team through a strong run of positive results, defeating nemesis Brazil in a Round of 16 match in Canada in 2015 to make the quarterfinals, and made the quarters again at the 2016 Rio Olympics, falling to host Brazil on penalty kicks. Australia achieved an all-time best ranking of fourth in FIFA’s national team rankings and is currently sixth.

Now the focus turns to who the FFA will appoint as interim head coach for the World Cup in June. Two W-League coaches — Mel Andreatta (Brisbane Roar) and Jeff Hopkins (Melbourne Victory) — have been mentioned, as well as native Australian Joe Montemurro, who leads Arsenal’s women’s team in England. Montemurro won two W-League titles with Melbourne City and then was promoted to an assistant role with the men’s side but went abroad in late 2017 to take over Arsenal.

He signed a contract extension in October of 2018 and said at the time: “I feel honored to have signed a new long-term contract with Arsenal. We’ve been working hard this year to reinvigorate the historic and special qualities of this team, and to implement an attractive style of football. We’re pleased that recent early season results have so far reflected the hard work. I’m working with some of the greatest female footballers in the world and with a top-class support staff. We have incredible support from the wider Arsenal Football Club and I’m really excited to continue my role. I feel at home here—we are one big family.”

Arsenal are currently in second place in the English Super League with 30 points from 12 games, only one point behind Manchester City (31 points from 13 games) with a game in hand and a solid chance to win their first English league title since the 2012 season.

Andreatta is in her third season as Roar head coach and worked with the Matildas’ at the Rio Olympics, so she has some experience with the full national team players. After missing the playoffs in her first season, last year she guided the Roar to the Premiership title (regular-season champions) and has her team on track for a second consecutive semifinals appearance.

Hopkins, a former national team player for his native Wales, has led Melbourne Victory to the top of the table this season but his relationship with the W-League goes all the way back to the first season in 2008/09, when he led Brisbane to the W-League Premiership and Grand Final championship.

This reporter caught up with him after that season — while on holiday in Thailand — and he said: “The inaugural W-League has proven to be a great success in many areas; most importantly it has given the best Australian women footballers the opportunity to play in a highly competitive league, regular week-to-week games and [strive] for starting places.” He wanted to see more imports in the league to provide more competition, which has certainly taken place over the years. Hopkins led the Roar to four consecutive Grand Finals through the 2011/12 season—winning two of them—before joining the Roar’s men’s side as a full-time assistant coach. He joined the Victory women’s team ahead of the 2017/18 season.

Australia’s situation mirrors what the men’s national team went through ahead of the World Cup in Russia last year. In that case, Ange Postecoglou qualified Australia for the World Cup through the intercontinental playoffs but stepped down for family reasons. Dutch coach Bert Marwick stepped in as interim coach for the World Cup while long-time A-League coach Graham Arnold took over afterwards.

For a short-term interim assignment, it would probably be more expedient to select Andreatta or Hopkins for the position, with the W-League season almost finished and not starting again until next October. However, success in the World Cup clearly should take away the interim label and bring a longer-term contract. That fact may entice Montemurro to leave Arsenal if he is offered the job — the chance to lead his country and a legitimate final four threat in a Women’s World Cup is a huge opportunity.

The pool of candidates could be expanded as the FFA goes through their vetting process, but again based on discussions with people in Australia, I think we could have news of the appointment by the end of this month.

Australian international Tameka Butt led City to a dominating performance in a 4-0 home win over the Newcastle Jets on Sunday. Butt was fouled in the penalty box and Japanese international Yukari Kinga scored from her penalty kick in the 31st minute.

Butt was dynamic all game by feeding her forwards, topping it off with a killer pass to set up recent signing Hallie Mace (see more below) with the fourth goal in the 69th minute. City finished with 72 percent of the possession, 698 passes to only 268 for Newcastle, 14 shots to eight for Newcastle and a 10-2 advantage for shots in the box.

On the defensive side, Newcastle had 33 clearances to only 8 for Melbourne. The three points propelled City into a tie for fourth with Perth Glory and the reigning champions still have a chance to make the semifinals for the fourth consecutive year. Melbourne City’s final game is on the road in two weeks versus Sydney FC, who currently are second.

Steph Catley, the Seattle Reign loanee and veteran of four NWSL seasons, scored Melbourne City’s second goal against Newcastle Jets on January 20. Standing at the far post, she was perfectly positioned for fellow Australian international Elise Kellond-Knight’s long corner in the 37th minute; Catley powered the header back across goal and into Britt Eckerstrom’s (Portland Thorns) net. Catley and KK will be teammates as well in Seattle this coming season.

Save of the Week—Sarah Willacy (Adelaide United)

Adelaide United goalkeeper Sarah Willacy (23), who is in her fourth season with the side, made a flying reaction save from Western Sydney Wanderers’s Kylie Ledbrooke’s long shot in the 69th minute on January 19 to keep her side in the match at 2-1 down. Ledbrooke had scored her team leading third goal of the year and the Wanderers went on to win 4-1. Western Sydney Wanderers’ shock win is damaging to Adelaide United’s playoff hopes, trying to make the playoffs for the first time in their eleven year history. United have lost two in a row but their last two games are at home against Newcastle and Brisbane; the Reds must come out of those matches with at least four points and must hope for some results to go their way among the teams currently in the top four.

Elizabeth Addo scored one goal, was fouled in the penalty box which led to another goal from a penalty kick, and fired a long shot off the crossbar during Western Sydney Wanderers improbable 4-1 win away against Adelaide United on Saturday January 19.

Addo was hugely impactful in Wanderers first win of the season, for a side that had only scored 5 goals in 9 previous matches. Addo, who played on Ghana’s 2015 World Cup team, is on loan from the Seattle Reign following her first season in the NWSL in 2018 after playing previously in Sweden, Hungary, Sweden, Nigeria and in Ghana.

The Canberra United-Melbourne Victory match on January 17 was postponed after 16 minutes due to lightning and rain on what began as a very hot (40 degrees C/104 degrees F) day buy turned into an evening with heavy rain and wind. Canberra was missing their two South African internationals Refiloe Jane and Rhoda Mulaudzi as well as Chilean international Maria Jose Rojas, who were away with their national sides. United coach Heather Garriock, herself a former Matilda, said that she couldn’t refuse to release them in a World Cup year but that: “Three internationals missing—it affects us quite a bit.”

In other player news, Brisbane forward Haley Raso (Portland Thorns) was on the game roster sheet for the first time this season and played the second half of the Roar’s 3-1 home loss to Sydney FC on January 19 in front of a crowd of 2,118. Raso has been rehabbing after fracturing three vertebrae in her back late last NWSL season for the Portland Thorns and had to learn to walk and run again. Her return to action is wonderful for the player, the Roar, the Thorns and the Australian national team.

Caitlin Foord (Portland Thorns) scored two goals in Sydney FC’s win over Brisbane; her first came from the penalty spot. Foord now has nine goals on the season, tied with Adelaide’s Veronica Latsko (Houston Dash) for second in the league and one behind Perth Glory’s Sam Kerr (Chicago Red Stars) who has ten.

Melbourne City signed American defender Hallie Mace for the rest of the W-League regular season (two remaining games) and possible playoff matches. Mace was selected in the 2019 NWSL College Draft earlier this month by Sky Blue FC, but sources told The Equalizer almost immediately that she has no intention of reporting to New Jersey.

She also contributed 24 goals in 79 games at UCLA. She has been capped three times by the full U.S. national team and told the media in Melbourne: “I’ve always wanted to come to Australia and I’m really excited to learn from the players and coaches. Hopefully I can score some goals or get some assists to help the team.”

If she is headed abroad, her time in Australia could be important to making contacts and showcasing her in a league with professional and national-teamers from around the world. Mace scored minutes into her debut.

It was comprehensive from City on Sunday night as @hailiemace netted in her first appearance in the @WLeague! #MCYvNEW pic.twitter.com/vD08azBJRG

Friday, January 25: Adelaide United are at home to Newcastle Jets