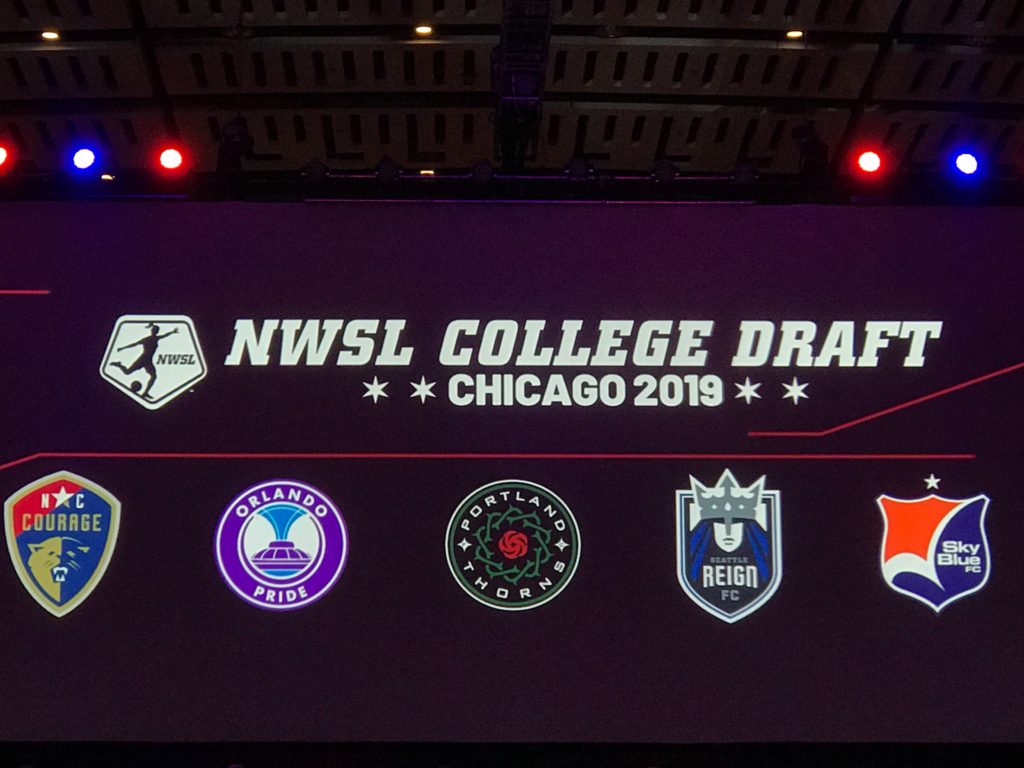 Davidson, who is foregoing her final year at Stanford to turn professional, is the first player to enter the NWSL having left college early following a change in the rules.

The towering defender, who already has 12 caps to her name and one goal, left it until the eleventh hour to declare herself for the draft in Chicago, with the lure of Europe always a possibility for young players coming out of college.

With the #1 pick in the 2019 @NWSL College Draft, the Chicago Red Stars select @tierna_davidson.#NWSLdraft | #mkot pic.twitter.com/VGS0F8UriC

The 20-year-old missed the end of the college season in 2018 after suffering a bad injury in September that also saw her forced to sit out the U.S. National Team’s autumn fixtures at home and in Europe.

Speaking of Europe, Davidson was not in attendance in Chicago due to being with the National Team in Portugal as they prepare for two matches against France and Spain next week.

But she did send a video message to those in attendance, with a clear message to fans.

“I’m extremely honored to have been chosen number one overall by the Chicago Red Stars. I’d like to thank Rory (Dames) and the rest of the Red Stars organization for having confidence in me.

“I’m very excited to start my club career in Chicago – its my kind of town.”

Davidson wasn’t the only National Team player to go early in the first round, with UCLA defender Hailie Mace selected second by Sky Blue FC. Mace, who has three caps at international level, made her debut for the U.S in a 6-2 win over Mexico last year – ironically replacing Davidson in the match. Sky Blue also picked up Julia Ashley at number six out of UNC, but on speaking after her selection, she told reporters: “I’ve been talking to my agent about possibly France, Sweden or Germany. I’m not sure yet, but it’s definitely an option.”

The Washington Spirit and Sky Blue were involved in the first trade of the day when the Spirit acquired the New Jersey club’s number three pick, sending three players to Sky Blue in return, who will be named at a later date. With that pick, the Spirit selected Stanford midfielder, Jordan DiBiasi.

The Spirit dominated the first round with four picks out of the first nine, and along with DiBiasi, they took defender Sam Staab out of Clemson at number four, DiBiasi’s Stanford teammate Tegan McGrady (Defender) at seven and UNC’s Dorian Bailey at eight.

The North Carolina Courage were the only other team who had first round picks, and they took forward Leah Pruitt out of Southern California with the fifth pick, and midfielder / forward Hailey Harbison out of Pepperdine with the final pick of the first round, which sees her reunited with former teammate, Lynn Williams.

From the #NWSLDraft: from left to right, Tegan McGrady, coach Richie Burke, Jordan DiBiasi and Dorian Bailey pose for a photo sporting the @WashSpirit colors. pic.twitter.com/JfgxfPfSMv

Full results from Round One

The second round commenced with Sky Blue on the clock as they selected their third player of the draft, and having lost a number of forwards from last season’s roster, they added forward Paige Monaghan out of Butler University, before selecting Baylor defender Julie James with the eleventh pick.

The Houston Dash, with new head coach James Clarkson in attendance, joined the party after the opening two picks, with two picks of their own, at 12 and 13. They selected Ally Prisock out of South Carolina and forward CeCe Kizer from Mississippi. Midfielder Betsy Brandon, of Virginia, was also selected by the Dash at 16, and Duke top scorer Kayla McCoy at 18.

Sandwiched in between those Dash picks were selections from the Courage, who picked up forward Lauren Milliet out of Colorado College at 14, and the Red Stars.

Chicago had to wait patiently having opened proceedings as they owned the 15th pick, and with the likes of Sam Kerr due to be away this summer at the World Cup, coach Dames selected Mexico international Maria Sanchez out of Santa Clara.

The Portland Thorns, who historically under Mark Parsons have not built heavily through the draft, had their first pick at number 17, but traded it to the Spirit for their 31st pick and their natural second round pick in 2020. With that 17th pick, Washington selected Wake Forest’s Bailey Feist (Forward).

Full results from Round Two

We’re halfway there. Here’s a recap of the second round of the 2019 #NWSLdraft. pic.twitter.com/YWTCvQ8qep

The third round of the draft saw the Utah Royals, Portland Thorns and Orlando Pride finally enter proceedings, with Laura Harvey, not known for retaining many of her picks since the league’s launch, selecting two players – forward Michelle Maemone out of Pepperdine and defender Madeline Nolf from Penn State. The Thorns selected Nolf’s teammate Emily Ogle three picks earlier at 24, while Orlando selected University of Colorado Boulder’s Erin Greening at 25.

Full results from Round Three

Third round’s a wrap. Here’s your recap of the last nine picks in the 2019 #NWSLdraft. pic.twitter.com/qTNn4odvlt

Last round of the day. Here are the selections from the fourth round of today's #NWSLdraft. pic.twitter.com/VZxxLAFsPK