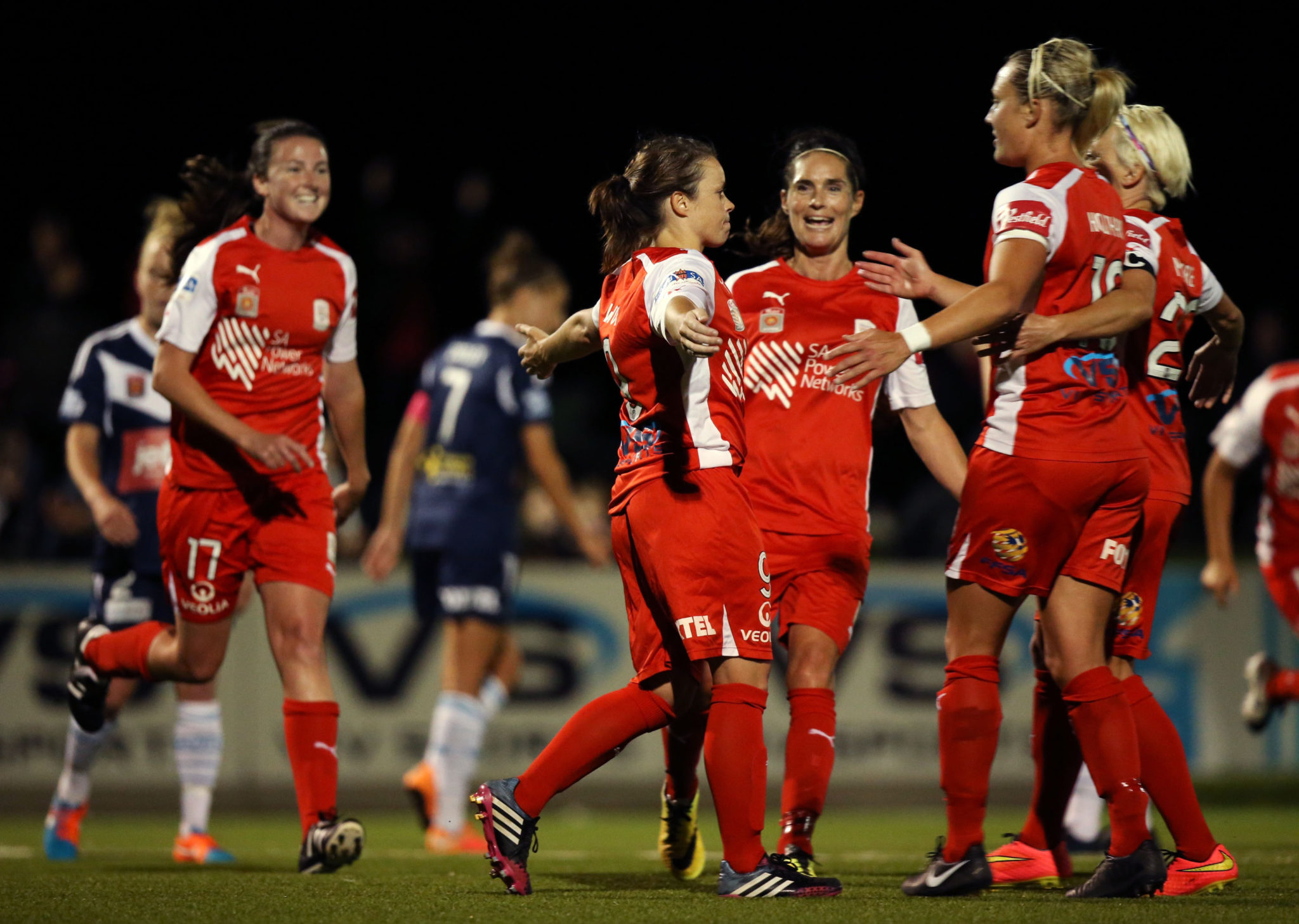 We look at the highlights from the Westfield W-League in Australia for Week 9.

Melbourne Victory against Perth Glory was the premier game of the round between the two teams tied at the top of the table after last week and it lived up to the billing. English international Natasha Dowie and Christine Nairn (Orlando Pride) each scored for Melbourne Victory in their  2-1 defeat of visiting Perth Glory on December 28 in front of a season high crowd of 7,163 at AAMI Park (though the attendance was clearly determined at the end of the W-League match with a very sparse crowd at the start, part of a doubleheader with the A-League’s Melbourne Victory against Wellington Phoenix—which was announced as 20,066.)

Emily Gielnik had a superb game, assisting Nairn on what turned out to be the winning goal in the 83rd minute. Gielnik’s 40th minute bending ball after she dribbled into the penalty box banged off the crossbar and she narrowly missed on two second half shots, with one just over the goal and the other well saved by Perth goalkeeper Eliza Campbell, who has played in Norway for some years and is an Australian national team pool player. Gielnik was the motor for many dangerous Victory attacks, with silky passing and change of pace dribbling that constantly threw off the defenders, and the Victory now are back at the top of the table. Dowie is tied for the league lead for goals along with Perth’s Sam Kerr (Chicago Red Stars) and Adelaide’s Veronica Latsko (Houston Dash) with eight. Nairn has three tallies and Perth’s American Rachel Hill (Orlando Pride) scored her fourth of the season just before second half injury time started. For Perth, the last remaining undefeated W-League side, it was their first loss of the season.

Forward Georgia Yeoman-Dale scored her second goal of the season in the 14th minute to give the Western Sydney Wanderers an early lead at home on December 31 versus Melbourne City. She took a lead pass from Leena Khamis well outside the box and first timed a shot that Australian international goalkeeper Lydia Williams was not expecting at all. City won 2-1 on goals by Tameka Butt and substitute Adriana Jones to move into a tie for fourth place with Perth on 13 points. The league table is starting to separate between the top 5 and the lagging quartet of Sydney FC, Canberra, Newcastle and the Wanderers. Sydney FC, with a game in hand, could jump into the playoff spots with some positive results in their final 5 games and thus retain its record of making the semifinals in all previous ten seasons in the W-League.

Georgia Yeoman-Dale with a STUNNER for the Wanderers! ?

Save of the Week—Sarah Willacy (Adelaide United)

Goalkeeper Sarah Willacy contributed to her side’s 1-0 deficit away to the Newcastle Jets on December 31 after she came way out of goal towards the right touchline in the first half to head off 18-year-old Tiegen Collister’s breakaway, but couldn’t clear the ball and Collister scored on a long shot from a narrow angle for her first ever W-League goal.

In the 56th minute, Emily van Egmond (Orlando Pride) blasted a ball from 30 meters on the Adelaide goal that tested Willacy but she saved the stinging shot well. A minute later Adelaide was even after Icelandic international Fanndis Fridriksdottir’s near post snap shot, her first goal in Australia. When Adelaide defender Laura Johns headed a cross into her own net past Willacy to give the Jets a 2-1 lead with 5 minutes left, the Jets looked home and dry. Adelaide fought back with two goals in injury time, from Isabel Hodgson and Veronica Latsko (Houston Dash), to take the three points. The win moved the Reds into second place, one point behind the Melbourne Victory and left Newcastle with a lot of ground to make up for their second consecutive semifinals appearance and third in eleven seasons. Latsko scored her eighth goal of the season.

Fanndis Fridriksdottir’s first W-League goal showed her class as the Icelandic international came on in the second half for Charlotte Grant and beat Newcastle Jets goalkeeper Britt Eckerstrom (Portland Thorns) on the near post as she dribbled through the penalty box in the 57th minute. She was dangerous throughout the second half and helped the Reds come back from 2-1 down to win 3-2 in injury time.

Note: Because of the extreme heat in Australia, the Jets-United game was moved a day later and kicked off at 9:30 am local time, the earliest start ever in W-League history.

Canberra United tied Brisbane Roar 1-1 at home on December 27 in front of 1,358 fans when a win would have put Canberra right back in the middle of the playoff hunt. Instead Canberra lay sixth and four points out of the playoff picture. South African international’s Rhoda Malaudzi scored in the third minute for Canberra while Allira Toby scored her third goal in three games for the Roar. Canberra had the better of the few chances in the second half, but the Roar won an important road point.

Canberra has experienced some recent roster turnover as their Australian youth international defender Natasha Prior will miss the rest of the season after collecting a concussion during week 5 against Sydney FC. Head Coach Heather Garriock said: “It is always a shame to lose a talented player to injury. But it is important that Tash takes the time out to make a full recovery and comes back to the pitch even stronger. The club will support Tash through this time, she is still a part of the training environment with us, and we all can’t wait to see her back playing football.”

Ashleigh Sykes (27), the former Australian international—who scored 5 goals in 19 games for the Matildas and played the 2017 season with the Portland Thorns (1 goal and 1 assist)—had retired after last season and became a Greens assistant coach, but will step back onto the field to help the side. Garriock said: “Ash has already shown the wealth of experience she possesses through her work on the sidelines this season. Now she can use that leadership and winning mentality on the pitch as we head into the back half of the season. Her skill and experience will be very valuable for this squad and I know that our Canberra United family will be so excited to see her out on the pitch, and this is a great example of Ash’s selflessness and willingness to put her club first.” Sykes won a Julie Dolan Medal for W-League Player of the Season (2015/16) and a Golden Boot (2016/17), both with Canberra. Sykes played the last 15 minutes of the Brisbane 1-1 tie, for her 109th W-League match (40 W-League goals), all with Canberra.

Former Seattle Reign Paige Nielsen, who played in the Korea Republic last season with Suwon UDC WFC and with Western Sydney in 2016/17, has left Canberra United to return home for personal reasons. Garriock said: “Paige has been a valuable contributor to Canberra United both on and off the field in her time here, and I wish her luck with what comes next. Player welfare comes first at this club, and we all agreed that it was important for Paige to look after herself moving forward.” Nielsen thanked Canberra United and fans in a statement:

Canberra United welcomed me with open arms. I will cherish the memories we have made in a very short time. I am grateful for everything Canberra United has had to offer and it has been an amazing club to be a part of. I want to thank the fans for your incredible support as we have been unstoppable at home. Even though it is time to take care of some personal matters, I wish the best to the club, coaches and most importantly to the players who have put in so much work this season.

Irish international Denise O’Sullivan (North Carolina Courage), who was with the club on a limited appearance guest contract, was first announced to take Nielsen’s spot for the rest of the season but then the club said that Chilean international Maria Jose Rojas (who played collegiately at the University of Texas-San Antonio) would take the full-time import spot for the remainder of the season.

XI Moments of 2018: Courage cap best WoSo season ever
19 things to watch in 2019: Another defining year for women’s soccer