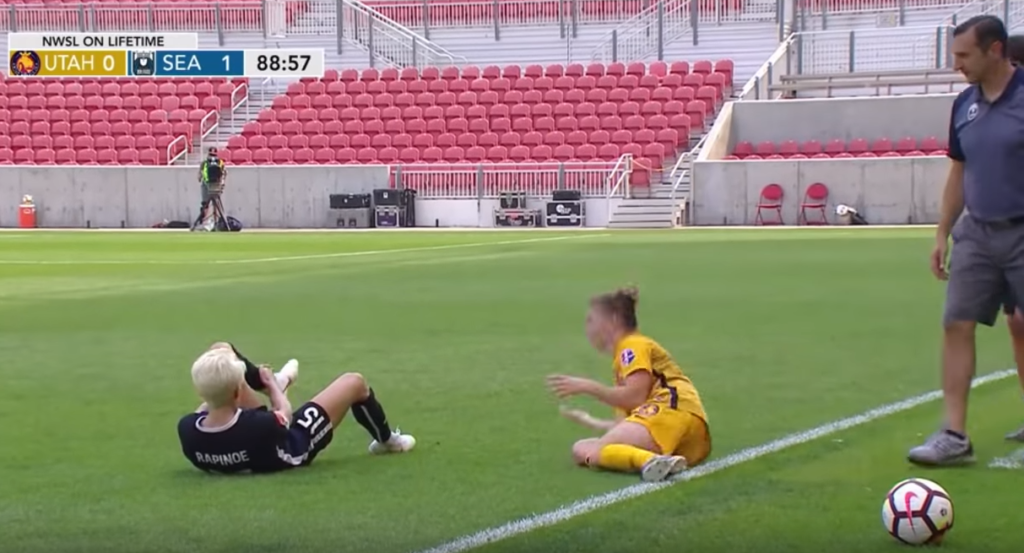 Soccer is a sport of great extremes, veering from heart-wrenching anguish to indescribable joy in a matter of seconds. In between, however, it can be a lot of fun – or even funny.

Back in August, the Utah Royals wrapped up their 2018 series against the Seattle Reign with a 1-0 loss at home. Jess Fishlock scored her long-awaited first goal of the season with a powerful header to take all three points on the day and leave the Royals winless against Seattle for the year.

The players and coaches may have been more concerned with points (and the awful air quality that contributed to four hydration breaks), but for those of us watching at home, the game was more memorable for another moment – the instantly viral Becca Moros flop.

Late in the game, Megan Rapinoe fell down to the pitch after a brief tussle with Moros, wherein the defender may or may not have clipped Rapinoe’s ankle. The referee thought she did and whistled for a foul. Moros thought she did not, and to emphasize her point, she flopped to the ground besides Rapinoe in an exaggerated dive, demonstrating exactly how she felt about Rapinoe’s acting abilities.

It certainly wouldn’t be the first time Rapinoe has been accused of diving, and for what it’s worth the contact looked innocuous to me. Either way, the moment stands out in the 2018 season for not only a brief moment of levity amidst a season otherwise highlighted by many frustrations, including Sky Blue’s on and off field struggles, national team commitments conflicting with the league, and the quality of officiating.

It’s the last one that’s most pertinent here, for while Moros made a lot of us laugh, she was also pointing out what many increasingly felt throughout 2018 – the officiating wasn’t good enough. It’s an incredibly difficult job that is much harder than it looks from the comfort of one’s couch, but the perceived lack of top-notch referees didn’t help the case of a league that sometimes doesn’t seem to take itself seriously.

Rapinoe got the last laugh – she got the win while Moros got a card – but the .gif lives on, sure to be tweeted every time a player flings her arms a bit too high or rolls around a bit too long. And perhaps Moros inspired other players to share their feelings in more dramatic ways, such as Crystal Dunn after she was less than impressed by Meghan Klingenberg on the big stage of the NWSL Championship.

Flop on, Becca Moros, flop on.