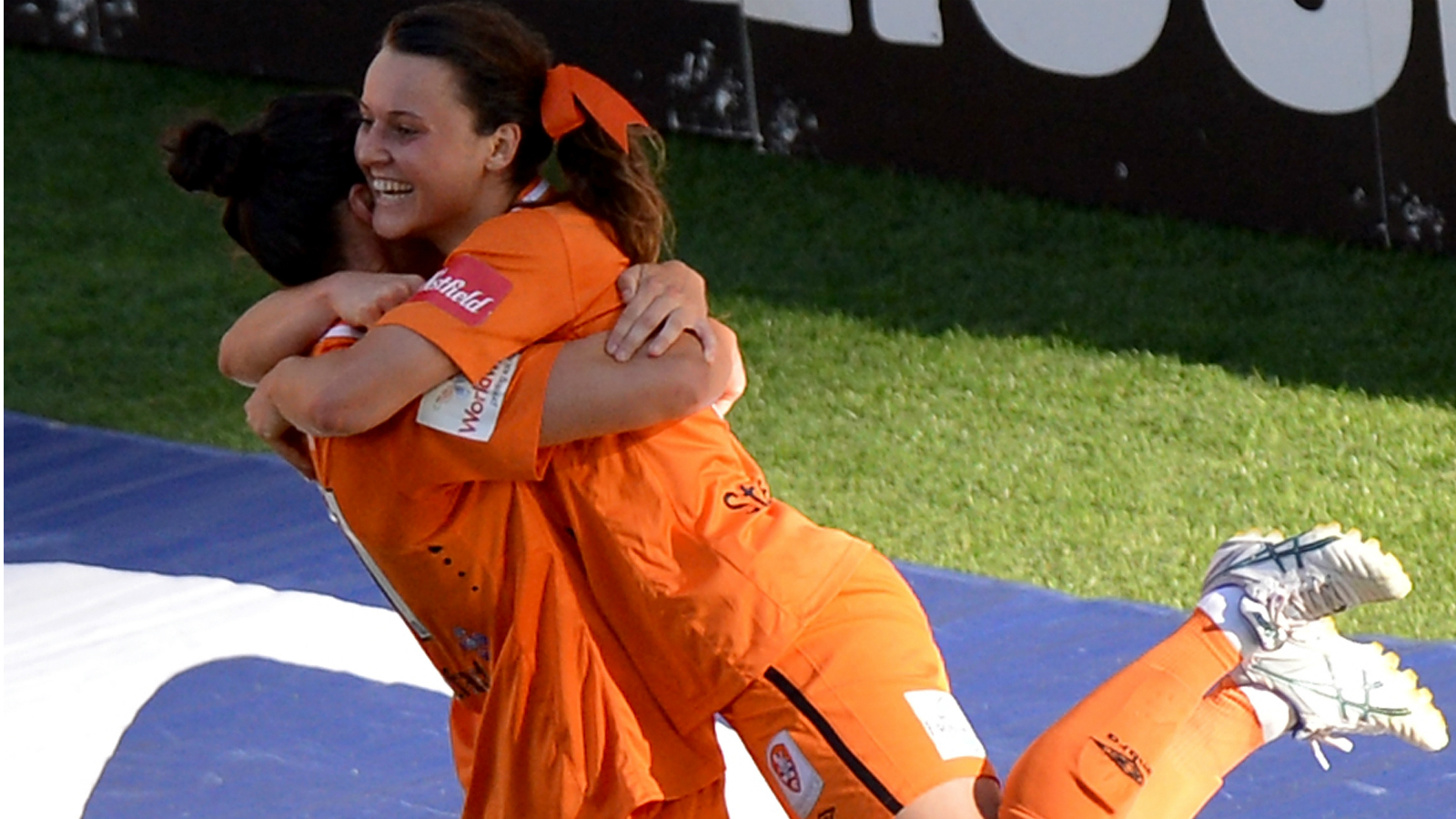 We look at the highlights from the Westfield W-League in Australia for Week 7 and hear from Australian international and Portland Thorns’ Hayley Raso as she has begun practicing on the field and anticipates playing again soon, after rehabbing from her back injury late in the NWSL season.

The U.S. international and Sky Blue FC midfielder scored her first goal (the winner) and recorded her first assist in the W-League in Sydney FC’s 5-2 home victory over previously undefeated Adelaide United on December 13. Sofia Huerta (Houston Dash) and Danielle Colaprico (Chicago Red Stars) each opened their goal scoring accounts this season for Sydney, with both Americans scoring against their former club. Australian youth and full international Princess Ibini, 18, scored a late brace as a substitute and now has three goals on the season and seven in four seasons with the club. Sydney FC has scored 5 goals in consecutive resounding wins over Brisbane and Adelaide and are in sparkling form as they move up the standings after three straight early season defeats. They are now tied with Adelaide for fourth place and have 16 goals on the season, one behind league leaders Perth and look to be in good shape to continue their run of qualifying for the semifinals in every W-League season since the league started for the 2008/09 campaign.

Veronica Latsko (Houston Dash) scored twice for Adelaide in their 5-2 loss to Sydney FC and now has six goals, good for a share of the lead in her first season in the W-League. The best of her brace came in the 22nd minute when she broke free of Alanna Kennedy (Orlando Pride) and shot diagonally from the left side of goal past Audrey Bledsoe (Washington Spirit). Her second goal off of a header in the second half as well as Sofia Huerta’s first goal for Sydney at the end of the first half were outstanding as well.

Save of the Week—Britt Eckerstrom (Newcastle Jets)

Portland Thorns loanee Britt Eckerstrom, for the second straight week, had the best save of the round and was the top goalkeeper overall, making several saves against Perth in her side’s 2-2 tie away on December 15. The Jets saw defender Larissa Crummer red-carded and played with 10 women for over an hour. Eckerstrom’s best save came in the 78th minute against Shannon May from the top of the box on a rebounding ball that Eckerstrom dove well for to keep it out of her net. She also snuffed out a Sam Kerr breakaway on the hour mark in a scintillating performance for the Jets.

A Player of the Match performance once again from @NewcastleJetsFC's Britt Eckerstrom and back to back Saves of the Round ? pic.twitter.com/G8M4nTTPlD

U.S. international and Washington Spirit loanee defender Taylor Smith (Washington Spirit) provided two assists within two minutes for Utah Royals import Katie Stengel in the Newcastle Jets 2-2 tie with Perth Glory on the road on December 15. Smith has looked strong all season with her speed on the wings and she was the difference maker to give the Jets a share of the points. Unfortunately the club announced that she emerged from the match with an ACL tear and Smith will now miss considerable time.

Stengel, with her brace, now is the W-League’s all-time leading American scorer with 13 goals, surpassing Stephanie Ochs (ex-University of San Diego, NWSL and Canberra United from 2013-14 through 2016/17) who finished her W-League career with 12 goals.

For Perth, Sam Kerr scored her league leading seventh goal of the season, while 16-year-old midfielder Leticia McKenna scored her first W-League goal in her first season with the Glory.

Notes: Brisbane Roar defeated previously undefeated Melbourne Victory 4-3 in front of a home crowd of 1,045 on December 16 to jump into a tie for second with Perth Glory, firmly putting their 5-1 defeat last week to Sydney FC behind them. Allira Toby scored her first goal of the season and eighth of her four year run with the Roar, while two Melbourne own goals under strong Brisbane pressure—from goalkeeper Casey Dumont and forward Natasha Dowie—and a late Yuki Nagasato (Chicago Red Stars) goal (her second of the season) from a Celeste Boureille (Portland Thorns) assist gave the home side the win. U.S. international Christine Nairn (Orlando Pride) and English international Dowie scored for Melbourne for the second consecutive game along with an injury time goal from Australian international forward Emily Gielnik.

After learning of the award, Dowie said: “It’s been a really positive start; we’ve set ourselves some ambitious goals for this season and it’s great to see that all coming together on the pitch. It’s clear from the other nominations that while this individual honor is humbling, it’s been a real team effort at Victory—and that everyone is sharing the responsibility and setting high standards.”

Hayley Raso should be back on the field soon

Portland Thorns winger Halyey Raso talked to the media last week about starting to train on the field with the Roar, after her severe back injury late in the NWSL season:

“It’s been a long road and a bit of a slow process so I’m really excited to be back in full training with the team and just progressing each day, which is really exciting.” Raso (24) was still a presence for the team during her recuperation, taking on a leadership role for the club’s half dozen teenagers on the roster. “For the first time I have stepped back and tried to take a bit of a leadership role and help the younger players and everybody on the team as much as I can and considering I’m spending so much time off the field [to date]; it’s been a good opportunity for me to do that.”

Raso was happy to be back on the field training, saying: “It’s great to be with the team, back in the team environment.” Raso has 30 caps and Matilda fans will be happy to know that she is hopeful to be back in a national team jersey for next summer’s World Cup: “My goal is to get back to playing minutes this W-League season, progress from there and hopefully make that World Cup squad.” Her Brisbane Roar head coach, Mel Andreatta said earlier this week: “[Haley] has been back out on the park and did some training tests and she’ll be ready for her first minutes [soon].”