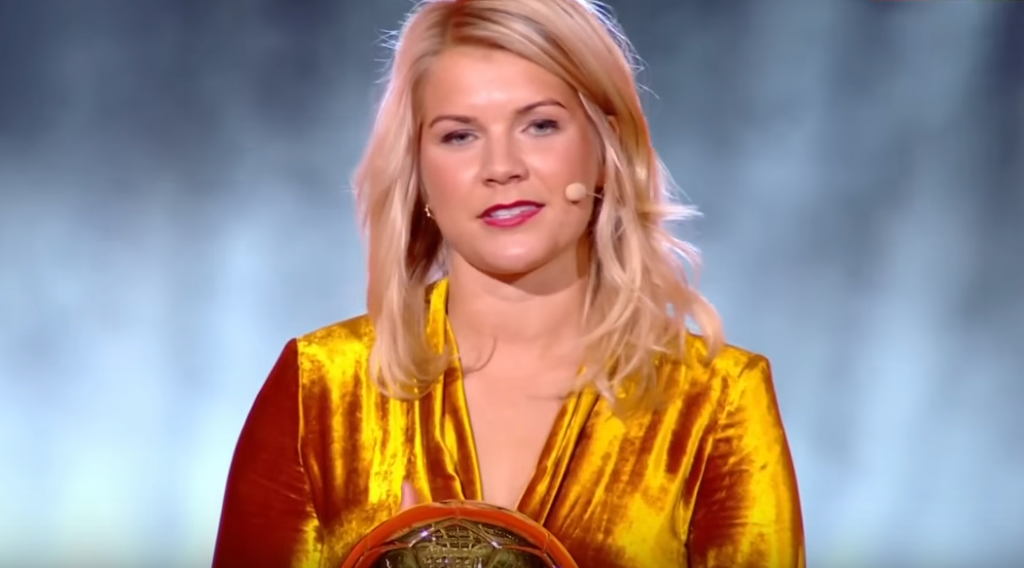 Let’s start with the part of this that should be the focus: Ada Hegerberg on Monday was named the first-ever winner of the women’s Ballon d’Or, as the best female soccer player on the planet.

Hegerberg is only 23 years old and already has scored over 250 career goals for club(s) and country. She is already a three-time UEFA Women’s Champions League winner with Lyon, and she recently re-signed with the club through 2021. She’s a hell of a player and she narrowly beat out Pernille Harder, forward for Wolfsburg and Denmark, for this inaugural award.

Hegerberg is unlikely to have next year’s massive platform, the 2019 Women’s World Cup, to showcase her skills. She hasn’t played for Norway in over a year, citing a lack of respect and overall lack of support from the federation. The Norwegian federation made history in late 2017 by granting equal pay to its men’s and women’s national teams, but Hegerberg has expressed no interest in returning despite ostensible progress.

For now, she continues her blistering goal-scoring pace for Lyon both domestically and in Europe. That’s a big reason she won this award. Hegerberg used the Ballon d’Or platform to encourage young girls to believe in themselves.

?"I would like to end this speech with some words to young girls all over the world: please believe in yourself." pic.twitter.com/VKSMvpQQZK

Then came the crap part of Monday’s announcement. Hegerberg was asked on stage by DJ Martin Solveig if she could twerk — a popular, sexually provocative dance. Hegerberg wasn’t amused.

Solveig apologized afterward, noting cultural differences and a lack of context. But said context — that he and Hegerberg danced to Frank Sinatra at another point of the presentation — might only make things worse. Did Luka Modric have to dance after winning the men’s Ballon d’Or?

Sincere apologies to the one I may have offended. My point was : I don’t invite women to twerk but dance on a Sinatra song. Watch the full sequence People who have followed me for 20 years know how respectful I am especially with women pic.twitter.com/pnZX8qvl4R

I explained to @AdaStolsmo the buzz and she told me she understood it was a joke. Nevertheless my apologies to anyone who may have been offended. Most importantly congratulations to Ada pic.twitter.com/DATdg0TfQk

Joke or not, it was a horrible way to spotlight a historic moment and a brilliant player — and a clear indication of how much progress still needs to be made in regards to treatment of the women’s game. And it’s a lesson to plenty of organizations: Just because you’ve finally come around on presenting a women’s award doesn’t mean you know how to handle the moment.

Now, back to enjoying the moment for Hegerberg.