Afghanistan captain: ‘If I have to sacrifice my dreams for future generations, it’s okay with me’ 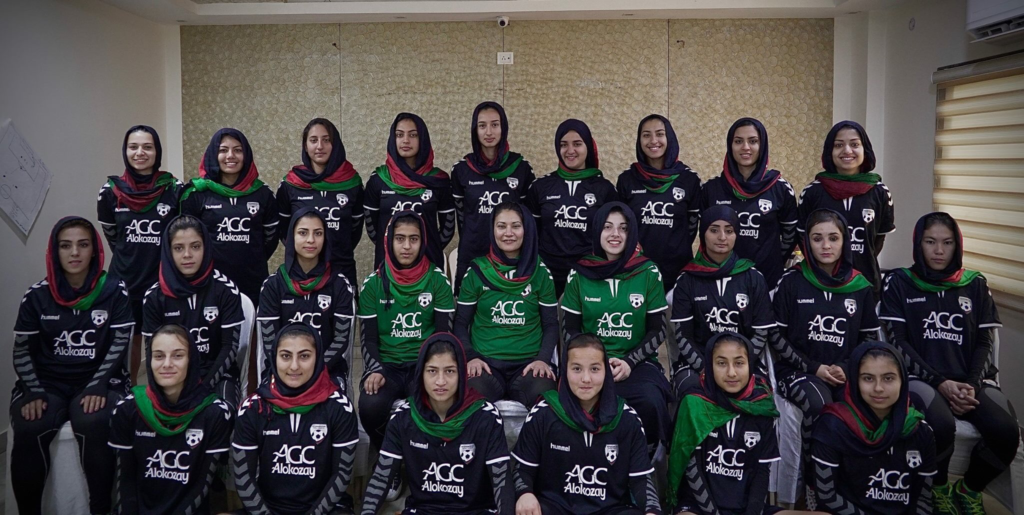 Shabnam Mobarez thought she would be in Uzbekistan this week captaining Afghanistan’s national team in the Central Asian Football Association (CAFA) tournament. But when the team was called in, Mobarez was not part of it, and she was never notified that she would not be included. Mobarez was also never told that coach Kelley Lindsey and assistant Haley Carter had been dismissed. Nobody told Lindsey or Carter either.

The sticking point is a contract presented to the players that calls for, among other things, a mandate to wear hijabs during matches and severe restrictions on outside sponsorship. Mobarez and nine other players declined to sign the contract. None of them were called into the latest camp.

“We chose not to sign it because it is limiting us as female athletes and as human beings,” Mobarez told The Equalizer in a recent interview. “It’s very controlling.”

The Asian Football Confederation and FIFA are looking into the contract. They have also been prompted to investigate the Afghanistan Football Federation due to charges of physical and sexual abuse as detailed to Suzanne Wrack in The Guardian. Multiple sources tell The Equalizer that there was inappropriate behavior by male members of the AFF toward players, but none have gone on record.

As for the stipulations in the contract, Mobarez stressed that her issue is not specifically about whether or not she wears a hijab.

“I believe that religion is a very personal choice. If someone wants to wear the hijab, I have no problem with that. Whoever doesn’t want to wear the hijab, it’s up to them. I don’t think it should be something that is forced is someone. Religion is not something you should do for another human being. It’s for a higher power.”

Be proud of who you are and always stand for what’s right⚽️?? pic.twitter.com/CaRMnOAFrS

Mobarez said the contract would not only prevent players from seeking outside sponsorship, it would prevent them from signing contracts with overseas clubs who have sponsor deals with companies not affiliated with the AFF.

“It is very limiting,” she said. “If I have an interview, with any sort of interview, I have to have permission from the federation. Other things are very controlled; what I post on my social accounts. If I do not follow these rules, I will have to go to a punishment, which is a fine.”

Mobarez said the players are required to pay any fines within a week and that payment must come directly from the player. She said she was in tears upon receiving the contract because of how limiting it was. She and the other nine players consulted each other before electing not to sign. Now they know that their lifelong dream of representing their country at the international level may never be realized again.

“A lot of players contacted me. They wanted to know my thoughts. I told them that is not something that I would ever sign. It’s very controlling and that’s not what I stand for. It is not the goal of our team to sign something that limits me as a player.”

The players, according to Mobarez, attempted to contact the AFF to negotiate against the contract, but they never heard back. Her questions about her status as captain also went unanswered. She was only told that she was no longer part of the team. The AFF did not immediately respond to a request for comment on this story. The federation said in a statement on Friday that it “vigorously rejects the false accusations.”

Mobarez, whose family left Afghanistan for Denmark shortly after the United States’ occupation began in the early 2000s, said she knows her lifelong dream of representing her country may be over, but that she is trying to lay the groundwork for Afghan women of the future.

“The biggest dream for me ever since I started playing soccer was to represent my country,” she said. “This contract is basically taking my dream away from me. But if that means I have to sacrifice my dreams for future generations to have better opportunities then it’s okay with me.

Mobarez believes that Lindsey and Carter were let go for standing by the players who elected not to sign the contract. Both have been vocal on social media in recent days and say they will continue to stand by the players regardless of their job status with AFF.

“Kelly has been a great help. I can’t be more happy to have shared this with [Lindsey and Carter]. They have always stayed by my side and supported me.”

She said that hiring Lindsey as head coach was a positive step for the program. She does not know the new head coach but said that Lindsey and Carter will always be her coaches.

As for why she thinks AFF came up with the contract, Mobarez said: “I think this has to do with holding back women. With our training camps that we had earlier this year, we had a lot of success and we had our FIFA ranking going up. I think they just don’t want us going somewhere that we would get so powerful that we would have something to say in this game. I believe that this is not about religion. This is about controlling the women and not providing the opportunities for these women to go out there and develop soccer in a country like Afghanistan.”