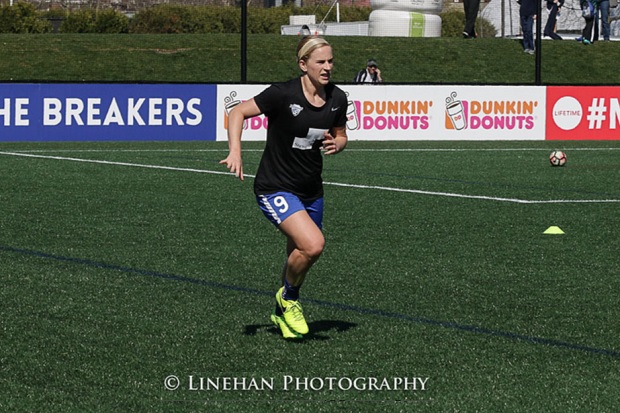 We look at the highlights from the Westfield W-League in Australia for Week 4.

English international Natasha Dowie scored a hat trick in the Melbourne Victory’s 3-2 road win over Sydney FC in front of a league high crowd of 5,540 (part of a A-League doubleheader) on November 25. The Victory, despite having far fewer touches and passes than Sydney, remained at the top of the table with only their third victory all-time in 17 games against the original Sydney side. Melbourne played the last 11 minutes with 10 women as Angela Beard picked up her second yellow card on a play against U.S. international Savannah McCaskill (Sky Blue FC). Dowie told Fox Sports TV immediately after the game: “It was probably one of the most exhausting games I’ve ever played in [because of the heat in Sydney]. Credit to Sydney; they’re a great team, but it just kind of shows what we’ve got this season and I hope it continues. Our togetherness off the pitch is really showing on the pitch and when it got tough we really dug in and every single player gave everything today. I’m just so happy that I could help the girls get three points and at the minute we’re feeling good. I just want to keep this winning momentum going.”

Hat-trick hero Dowie is making it hard for English national women’s team head coach Phil Neville to ignore her in his planning ahead of the 2019 Women’s World Cup next summer—she scored 10 goals earlier in the year for Linkoping in Sweden and now has 19 in four seasons with the Victory—continuing to build onto her all-time team scoring record. She has been in the international wilderness for some time since she was left out of the 2015 Women’s World Cup side for Canada.

Australian international Sam Kerr scored twice and had two assists to lead Perth Glory to their second victory of the season, a 5-2 win at home against champions Melbourne City on November 25. Kerr’s first goal in the 10th minute was a classic, as she beat four defenders and the goalkeeper on the dribble from near the midfield stripe, and then fired across goal from the top of the box into the left hand corner of the net. Kerr and her Chicago Red Stars teammate Alyssa Mautz, who also had a brace, are tied for the league lead in goals with Dowie on four apiece.

Save of the Week—Sham Khamis (Canberra United)

Australian youth international goalkeeper Shamiran Khamis stopped Michelle Heyman from close range in the 62nd minute to keep Canberra a goal down to Adelaide United, but Canberra lost their second road game in a row on November 22. Adelaide United is unbeaten in three games. Veronica Latsko (Houston Dash) scored her second goal of the season in the first half from a Heyman cross and caused the late own goal from Canberra’s Natasha Prior off of her shot that initially was saved by Khamis.

In her second season with the Jets, Eckerstrom has surrendered only 2 goals in three games and shut out Canberra United and the Western Sydney Wanderers in consecutive games, the later a 1-0 road win on November 25. The Jets offense have struggled but thanks in large part to the Portland Thorns loanee and her defenders, they have jumped into the playoff reckoning, in fourth place with six points and the side has played only three games so far.
***
Note: Western Sydney Wanderers have had a torrid time thus far this season, with no wins and no goals scored after 4 games, despite bringing back Lo’eau LaBonta for a second season from the Utah Royals, adding her club teammate Sydney Miramontez and Ghanaian international Elizabeth Addo (Seattle Reign), along with five former Sydney FC players and head coach Dan Barrett. There is some good news coming out of Sydney’s western suburbs however as the club is building a new 30,000 stadium for the Wanderers and Parramatta Eels of the Australian Rugby League, which is set to open in 2019. England’s Leeds United men’s side is heading down to play the first soccer match in the new venue on July 20th. Australian youth international goalkeeper Jada Whyman, in her fourth season with the Wanderers, participated in the announcement on November 26 and said: “It will be fantastic, the structure of the stadium will have the fans closer than ever; we have such a fan base that it will be great for the community.”