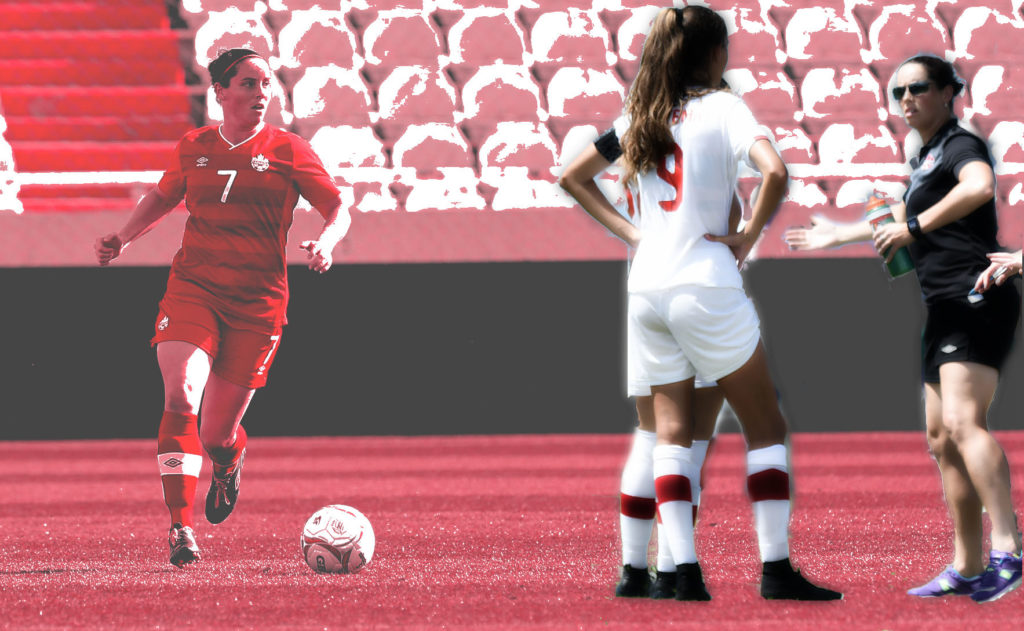 The 2018 FIFA U-17 Women’s World Cup may have given us a glimpse into one of the next great up-and-coming coaches in women’s soccer: Rhian Wilkinson. Capped 181 times for Canada and holder of two Olympic bronze medals, Wilkinson recently retired from playing and jumped straight into coaching.

The 36-year-old is Canada’s U-17 head coach and helped guide an unheralded and surprising squad to the U-17 World Cup semifinals before a 1-0 loss to Concacaf rivals Mexico on Wednesday.

“I’m very proud of this team,” Wilkinson said postgame. “I think they’re wonderful young women. Today wasn’t their day. Mexico deserved the win. I think we lost and they’ll learn from it and I think many of them will play for Canada Soccer’s Women’s National Team one day,”

Wilkinson is from the John Herdman school of coaching. She’s big on communication, motivation and making sure Canada is a close-knit, united team.

“[There’s] No more pride than seeing Rhian Wilkinson on the sideline.” Herdman, the former Canada women’s coach and current Canada men’s national team coach, told reporters in Vancouver earlier this week. “Women leading women, which was our big catch cry of our program. To think what she’s committed to, she’s been part of an elite player, elite coach program for the last two years. I’ve watched her toil behind the scenes, and learn her craft. Just watching her with that level of composure out there, has been fantastic. What a moment for those young ladies and particularly for Rhian, it’s nothing but pride.”

We win together, we lose together. This one will hurt for a bit, but I could not be prouder of this group of young women. There is a medal to play for, we will be back and back stronger. #canw17 #21strong #aimingforthepodium pic.twitter.com/qEr9JdkghE

Wilkinson has been a part of Canada’s technical support staff at the U-15, U-17, and U-20 Excel levels alongside Bev Priestman. Wilkinson was also an assistant for Canada at the 2017 and 2018 Algarve Cup. It wasn’t until this past summer that Priestman left for an assistant coaching job with England’s senior team, and Wilkinson eventually took over.

Some of the top coaches in soccer have worked their way up from the college ranks or lower professional leagues, waiting for that life-changing career opportunity. But there’s also a clear trend of ex-players tasking on coaching soon after they hang up their cleats. Look across the pond, where men’s football legends Frank Lampard (Derby County), Steven Gerrard (Rangers), and Thierry Henry (Monaco) are managing with next to nothing in terms of a coaching resumes.

England women’s national team manager Phil Neville had next to no management experience and had zero coaching knowledge of the women’s game upon being hired in January 2018. What Lampard, Gerrard, Henry and Neville don’t have in management experience, they ostensibly make up for in playing experience. They’ve been in locker rooms; they know how to win and they know what motivates players.

Wilkinson played at the highest level for Canada and in the National Women’s Soccer League. She wasn’t a superstar, by any means, but she knows what kind of sacrifices are required to play in a World Cup in her home country. Wilkinson battled through injuries late in her career just to be able to represent Canada. She knows first-hand the commitment and hard work that’s required to be a professional player. And over the past two years, she has learned the trade within Canada Soccer’s system. The federation hopes to transition more high-level players into high-level coaching and technical roles through specific programming.

Congrats to our 1st ever Elite Player Elite Coach (EPEC) Rhian Wilkinson for leading this team to history, & to all REX leaders/coaches for 6 years of hard work delivering 18 players to the WNT and now a WC semi-final, we take a lot of heat but on days like this it's worth it…

Canada’s U-17 players appear to respect and admire Wilkinson, hoping they can one day enjoy a career such as hers at the senior level.

Canada Soccer has shown an ability to develop young, up-and-coming players, including U-17 star Jordyn Huitema, who scored three goals at the U-17 World Cup. There has been an ongoing investment in grassroots players, so why not in coaching as well? If Wilkinson can continue to learn, grow, and teach Huitema, Ariel Young, Caitlin Shaw, and others, it’s easy to see how she might one day — in the not-too-distant future — find herself in charge of the senior side.