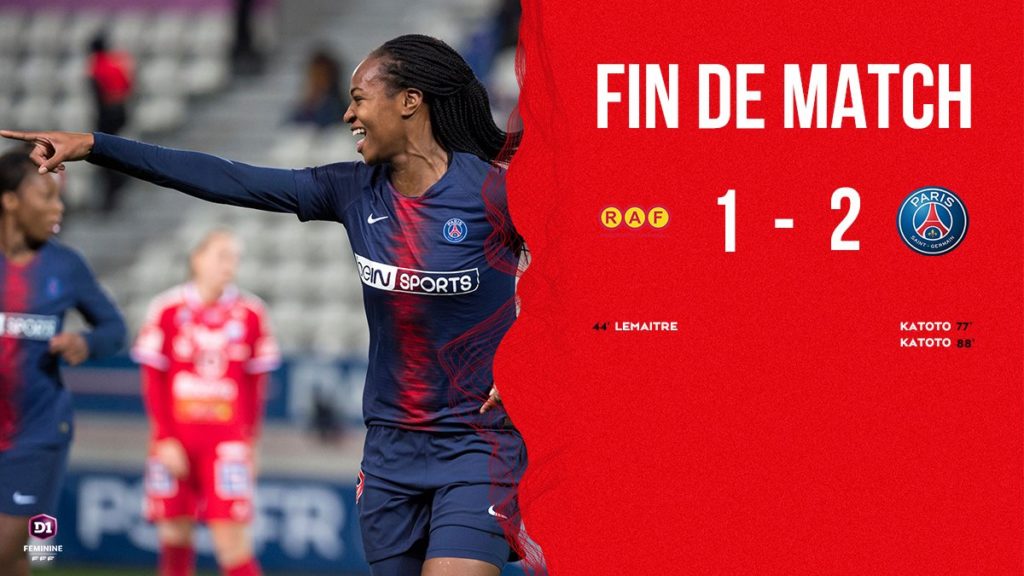 The latest: Paris Saint-Germain fell behind winless Rodez on Sunday and trailed into the final 15 minutes before Marie-Antoinette Katoto scored on penalties in the 77th and 88th minutes to avert disaster. Katoto’s goals give her 10 on the season, equal to Lyon’s Ada Hegerberg who had one in the league leader’s 4-1 win over Fleury 91. Down in the relegation zone, Metz defeated Lille 2-0 to move to safety and drop Lille to the second relegation spot.

PODCAST: A revolving cast of characters discuss an NCAA tournament classic, what ails the U.S. youth teams, and more!

The latest: Arsenal (d. Brighton & Hove, 4-1) remained perfect through nine matches while Manchester City (d. Yeovil Town, 4-0) stayed within breathing distance six points back. The undefeated sides will meet Sunday in Manchester in what looks to be a must win for City having already dropped six points on draws this season. Also on Sunday, Everton looks for their first win when they host slumping Liverpool.

The latest: Wolfsburg put their perfect record on the line away to SC Sand who had conceded only five times in eight matches ahead of the clash. In the end the league leaders scored nine in an authoritative, 9-0 victory. Bayern Munich won 4-1 over Werder Bremen to remain seven points adrift but appear to be second best this season.

The latest: Atletico Madrid (d. Rayo Vallecano, 3-1) and Barcelona (d. Real Sociedad, 5-2) both won safely to maintain the status quo at the top of the table with Atletico ahead by a point. Levante used six different scorers to pound Granadilla Tenerife, 6-0. One of them was Charlyn Corral’s 8th of the season, putting the Mexican one clear of Jennifer Hermoso (Atletico) and Alba Redondo (Albacete) for the league lead.

The latest: Natasha Dowie’s hat trick carried Melbourne Victory over Sydney 3-2 to remain unbeaten at the top of the table. Perth and Adelaide are also undefeated but with different tracks. Perth already have four goals from Samantha Kerr and Alyssa Mautz (tied with Dowie for league lead) while Adelaide have scored only three total goals across three matches and have not conceded. Look for Tim Grainey’s W-League Week in Review soon.