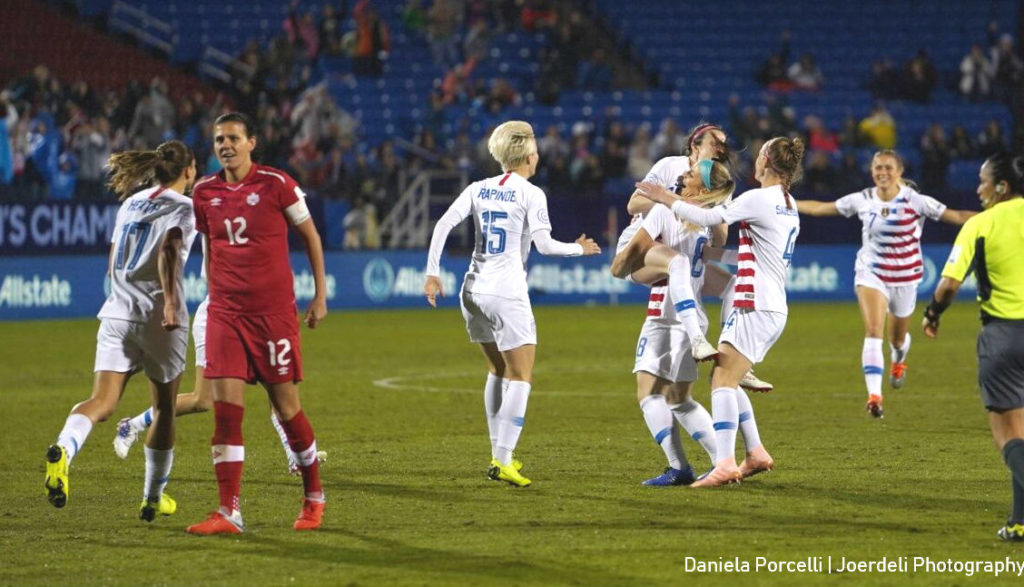 Rose Lavelle’s early goal stood up as the game-winner for the United States in a 2-0 victory over Canada on Wednesday in the Concacaf Women’s Championship final in Frisco, Texas.

The regional title is the sixth all-time for the U.S. The Americans have won every Concacaf World Cup qualifying tournament they’ve played in — except for that near-disaster in 2010, when they finished third and had to beat Italy in a playoff to qualify for the World Cup. That 2010 semifinal loss to Mexico remains the only match the U.S. has not won in 33 all-time Concacaf World Cup qualifying matches.

Wednesday’s victory also continued the U.S.’ dominance over Canada. The Americans are now 49-3-7 all-time against their rivals to the north; Canada’s last victory in the series came in 2001.

Lavelle gave the U.S. the lead in the second minute. After Canada defender Shelina Zadorsky’s poor clearance, Lavelle collected the ball from 18 yards out and placed her shot inside the far post, beating Canada goalkeeper Stephanie Labbe.

Canada settled into the match from there, with Kadeisha Buchanan’s header midway through the half forcing U.S. goalkeeper Alyssa Naeher into a diving save.

Alex Morgan added an insurance goal in the 89th minute; replays showed that she was well offside. The goal was her 97th in 151 career appearances for the U.S., and her seventh of the tournament, making her the top scorer with seven goals in four matches played. She has 24 goals in her last 24 U.S. matches.

Each team had already qualified for the 2019 Women’s World Cup by winning their respective semifinals, and the US are the bookmakers’ favourites as usual. OLBG’s list of betting sites for football punters has all major bookies backing the US, with maybe Brazil coming in a distant second. Back in the Concacaf, Jamaica qualified for the Women’s World Cup for the first time earlier on Wednesday, defeating Panama in a penalty-kick shootout.

The U.S. will next play in November. The Americans had scheduled games in Europe against the Netherlands and Switzerland, but those two teams are due to meet in the UEFA playoff, forcing the U.S. to reschedule. The U.S. will still travel to Europe for a pair of games against opponents to be confirmed.

Jamaica qualifies for first World Cup
FC Barcelona to NWSL? Not so fast