USWNT complete obliteration of Group A 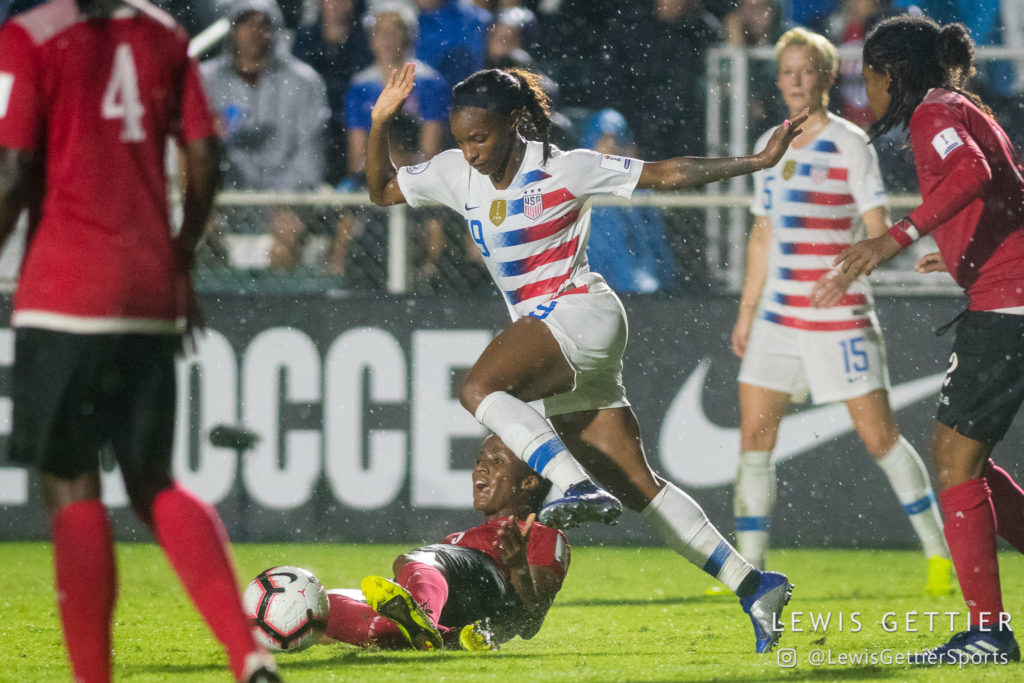 The United States completed their waltz through Group A at the Concacaf Women’s Championship with a thorough, 7-0 victory of Trinidad and Tobago. A three-goal blitz near the end of the opening half opened up the match, but the U.S. were in control for the entirety of the 90 minutes. The sides knew their fate from the end of Match Day 2. The U.S. are through to Sunday’s semifinal in Frisco, Texas where they can lock up their place at the World Cup while Trinidad and Tobago were eliminated.

Jill Ellis returned to her lineup against Mexico and there was relentless pressure almost from the opening whistle. It took until the 9th minute for the T&T defense to get stretched too far to recover. Julie Ertz played a wife ball to Tobin Heath. The cross found Alex Morgan at the far post and a deft touch delivered her a 93rd international goal.

The rest of the half was somewhat reminiscent of the meeting between these teams four years ago when a dominant U.S. side was held to a 1-0 victory that raised alarm bells. There were no such alarms on this night, and as rain began to fall Rose Lavelle put her stamp on the match in the final five minutes of the half.

In the 41st minute, after several U.S. posts and some general frustration playing against the low block, Lavelle was given enough space from 25 yards that she teed one up with her left foot and beat keeper Saundra Baron to her left. In the 43rd, Crystal Dunn crossed one for Megan Rapinoe, and after some knocking around and a ball off Ertz, Lavelle came swooping in by the penalty spot to get to the loose ball and score her second in less than 90 seconds.

There was still time left in the half, and time for one more goal. In the 45th, Dunn sneaked central and was found unmarked by Horan. Dunn stepped into one from distance with her right foot and beat a diving Baron to the keeper’s right.

The start of the second half brought more scoring. Horan got on the board in the 49th minute when a clearance landed at her feet outside the box and she smashed it inside the left post. Almost immediately off the restart Morgan joined Lavalle on a brace. Carli Lloyd dribbled into space and played a perfect ball to Heath. Heath’s shot was saved by Baron but the rebound came to Morgan who took one dribble around the prone goalkeeper and finished at a difficult angle, her shot glancing off the near post and rolling across and in.

Heath finished the scoring in the 58th minute. Dunn and Ertz combined to win the ball high in midfield. Ertz wound up on it and played it ahead to Rapinoe who played a low, hard cross that Heath was able to finish from inside five yards.

The U.S. finish group play a perfect 3-0-0 with a goal difference of 18-0. They have not conceded in group play since 1994 (did not participate in 1998, no groups in 2002) when they beat Trinidad and Tobago 11-1 on the way to outscoring four opponents 36-1. They will play the Group B runner-up Sunday evening for a spot in the World Cup.

Trinidad and Tobago, a semifinalist four years ago, finish 0-3-0 with 14 goals conceded to one scored.