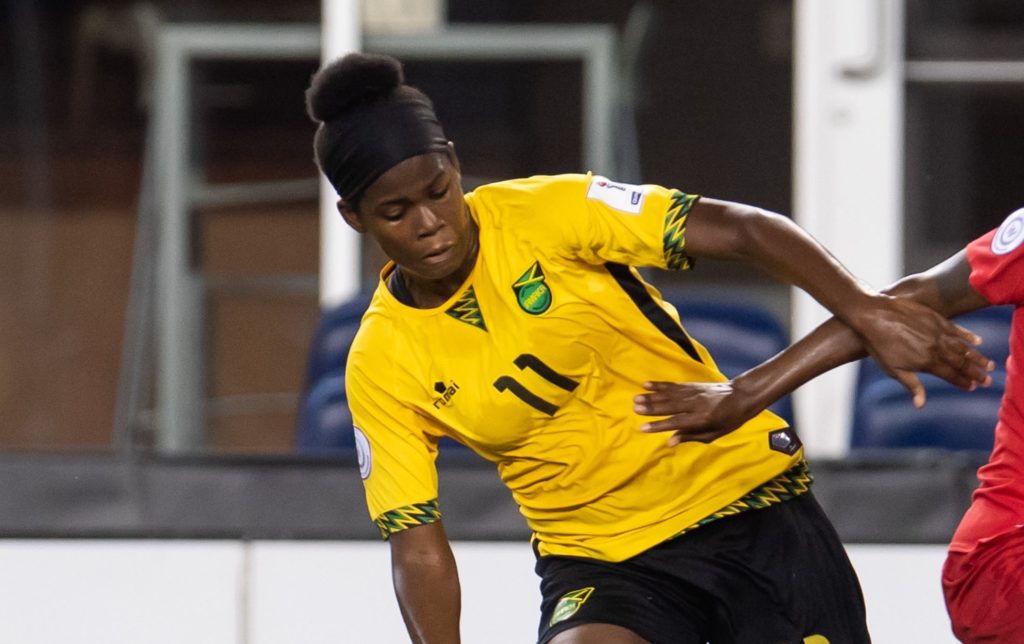 Khadija Shaw has Jamaica dreaming of the Women’s World Cup for the first time.

The forward, known to her teammates as “Bunny” for her speed, scored mere seconds after the start of the second half to deliver her country a shocking 1-0 victory over Costa Rica on Monday at H-E-B Park in Edinburg, Texas, in Group B of Concacaf World Cup qualifying. The victory puts Jamaica level on points with Costa Rica, whose ascent over the past half-decade brought them to the World Cup for the first time in 2015 and made Las Ticas the de facto fourth-best team out in the region.

Jamaica still has a shot at its first Women's World Cup thanks to her goal to defeat Costa Rica. #CONCACAFWC pic.twitter.com/C2inTSof9r

Costa Rica were on the wrong end of what appeared to be a dubious call in the 56th minute. Priscilla Chinchilla appeared to equalize for Costa Rica after Shirley Cruz put her header off the post, but referee Melissa Pastrana deemed that Jamaica goalkeeper Sydney Schneider had possession of the ball. Replays showed that Schneider never came close to holding the ball.

This is a much better view of the Costa Rica goal that was called back. pic.twitter.com/eqvKR6xta3

The incident puts further emphasis on the lack of clarity over whether or not there will be video review at the 2019 Women’s World Cup. Early indications were that there would not be; FIFA has vaguely indicated that could change. The 2018 Men’s World Cup utilized video review.

Monday’s result could send Jamaica through to semifinals at the expense of Costa Rica. Each team now sits on three points, in second place in Group B. The top two teams advance to the semifinals, where three sides automatically qualify for the 2019 World Cup and the fourth-place finisher enters a two-leg playoff with Argentina, who finished third out of South America.

Goal difference is the first tie-breaker. Right now, Costa Rica has a plus-7 goal difference thanks to an 8-0 win over Cuba, and Jamaica is at minus-1 after losing their opener to Canada, 2-0. But Costa Rica ends group play on Thursday against favored Canada, while Jamaica finishes group play against Cuba, which is far and away the worst team in the group.

If Jamaica defeats Cuba as expected, Costa Rica would need to defeat Canada and hope to maintain a better goal difference.

Canada puts a dozen on Cuba

In Monday’s nightcap, Canada eviscerated Cuba with a 12-goal pounding to move to the brink of the semifinals. Seventeen-year old Jordyn Huitema and Adriana Leon both hit for four goals in the route. Leon had a chance at a fifth in stoppage time but hit the side netting.

Deanna Rose, Rebecca Quinn, Christine Sinclair, and Diana Matheson also contributed goals while Kailen Sheridan kept the simplest of clean sheets. Matheson was making her 198th appearance in the red and white and remains on course to hit the magic 200 milestone during this tournament.

Canada (2-0-0, 6 pts) are now firmly in command of Group A heading into Thursday’s finale against Costa Rica. The Costa Rican loss to Jamaica will see them enter the match in dire straits, needing an upset to have any reasonable chance of advancing. Cuba face Jamaica, also Thursday. The only way for Canada not to advance would be to lose to Costa Rica by four goals and have Jamaica beat Cuba by 11 goals.