Canada grind out win over Jamaica 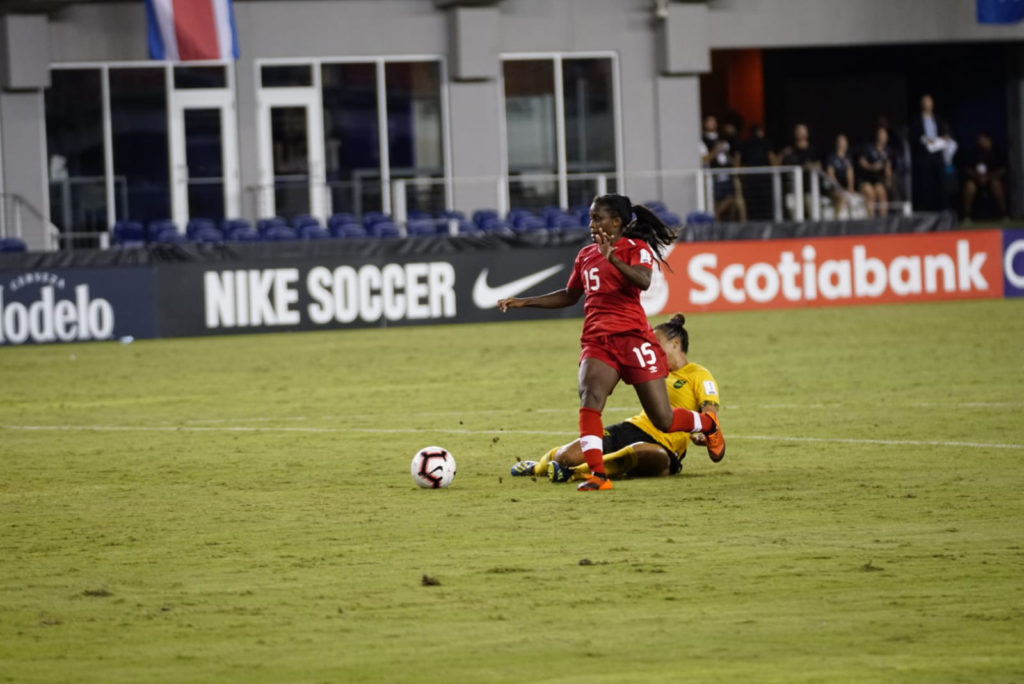 Nichelle Prince scored once on either side of halftime to pace Canada over Jamaica 2-0 in their Group B opener of the Concacaf Women’s Championship. Canada trail Costa Rica on goal difference after their 8-0 whacking of Cuba.

Prince’s first half goal came in the 33rd minute following a corner kick. The initial ball in was cleared and recycled, and then cleared and recycled again. Eventually the ball fell to Prince who drove it home from about midway into the box to give Canada the lead.

The second goal was in the 79th minute. After an extensive run of possession in midfield, Adriana Leon sent a well-paced ball ahead to Prince who had one defender to beat before getting off a shot in the box to give the Canadians some breathing room.

Jamaica generated precious little in terms of attack, but did come close to a chance to level the match on a ball that nearly split the Canada center backs and looked as if it could have been a penalty. But the ball was knocked away and no call was made leaving the score 1-0 in the moment. Meanwhile Canada put only four of 20 shots on goal to Jamaica’s one out of three.

Both teams are back in action Monday. Canada face Cuba who were overwhelmed by Costa Rica. Jamaica’s best chance to sneaking through the group comes in their match against Costa Rica.

Costa Rica gave Cuba a rude welcome to the Concacaf Championship by blasting them 8-0 in the opening match for both and the first ever in the event for Cuba. Things were not all perfect for Costa Rica though. Goalkeeper Noelia Bermudez had to be carried off after taking an awkward fall and fracturing her left arm. She has been ruled out for the remainder of the tournament.

It took only until the 4th minute for Costa Rica to break through. Following a midfield turnover, Melissa Herrera touched the ball around the Cuban defense and smacked a shot off the underside of the crossbar and in. Before the 5th minute was up it was 2-0. Herrera this time sent in a cross from the right side. Raquel Rodriguez sent it directly into goalkeeper Katherine Montesino. But there was a big rebound and Priscilla Chinchilla had a tap-in for her first international goal.

The third goal happened in the 19th minute. Montesino came out to get Katherine Alvarado’s corner kick but she didn’t get there allowing Fabiola Sanchez to get it in.

Shirley Cruz scored the next two. In the 90 seconds that followed the restart after Bermudez’s injury, Costa Rica possessed circles around Cubs and eventually Cruz beat an out of position keeper on a feed from Chinchilla. Six minutes later, in the 38th minute, Herrera drew Cuban defenders and laid it off to Cruz who scooped one up and over the keeper.

Chinchilla doubled down on her first international goal by getting her second. Following a heavy touch she beat two opponents to the ball and took a crack at it, scoring from beyond the 18.

Cuba kept the 6-0 score line intact for much of the second half until Cruz won a penalty with a long run through the Cuban defense that ended up with her being fouled by Montesino. Maria Barrantes buried the penalty. Barrantes scored the final goal when Costa Rica played a short corner in stoppage time and she played a perfect flick on the ball in.

Costa Rica next play Jamaica on Monday. Cuba will try their luck against Canada, also Monday.

Karina LeBlanc is trying to grow the women’s game throughout Concacaf
Weekend Roundup: Netherlands open playoffs with win over Denmark