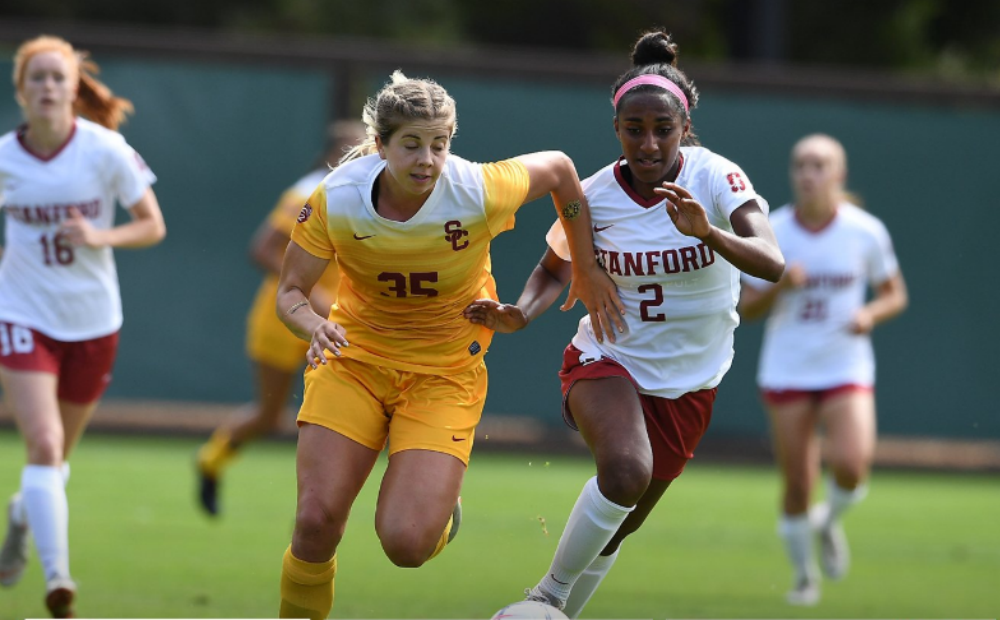 In a conference battle between the top two teams in the country, the top-ranked Stanford Cardinal defeated the No. 2 USC Trojans, 1-0, in overtime thanks to a low roller from freshman forward Sophia Smith.

The result keeps the reigning national champion Cardinal (10-0-1) undefeated in 33 matches, while handing USC (9-1-1), the 2016 national champs, their first loss of the year. The match also marks the second time this month Stanford has downed the second-ranked team, as the Cardinal previously defeated the then-No. 2 UNC Tar Heels, 2-1, in overtime on September 9.

The match started off as expected for the two evenly-matched teams. The first 45 minutes were defense heavy while the attacks split the shots evenly with five apiece, but only USC had managed to put one on frame.

The second half started off on a much higher tempo than the first had ended, and it wasn’t long before Stanford emerged as the more dominant attacking team. In just the 47th minute, chaos broke out inside the box as Stanford created a dangerous opportunity in front of goal. A cross was sent in from the near flank intended for Smith, but she was out-jumped by an USC defender, who headed the ball away. The play lured USC goalkeeper Kaylie Collins off her line and left her looking around in confusion for the ball, allowing sophomore forward Madison Haley, whom the ball had fallen to, to fire off a shot in front of an empty net. Luckily for Collins though, Haley’s shot was deflected off a Trojan defender and flew wide of the near post.

Stanford sophomore Catarina Macario, who has had a quieter season so far than in her rookie year, really got into the action early in the second half, firing off three shots in the first 20 minutes of the second half. The first of those came in the 52nd minute, when the Brazilian-born forward received a long ball within striking distance and took a touch or two before cutting back around two defenders to fire off her shot, but her shot grazed the top of the crossbar and sailed out

Macario then came inches away from striking for the home Cardinal with a bending stroke from about 20 yards out, but Collins took to air to get a hand on Macario’s shot and redirect it over the crossbar to prevent the top-ranked Cardinal from getting on the board.

The third of those came in the 73rd minute when, as the game got progressively chippy, Stanford was awarded a free kick within scoring distance. Macario, known to be the resident free kick specialist, took  the set piece, but her curling shot was off the mark.

The second half wasn’t all Stanford though, as USC also managed to create a handful of solid opportunities as well. The most potent of those came in the 65th minute when junior midfielder Ashleigh Plumptre passed forward for senior forward Leah Pruitt, who was dangerously close to goal. Pruitt looked to be in scoring position, but she sent a hard, close-range shot right to Stanford netminder Alison Jahansouz, who was able to make the stop.

After a scoreless 90 minutes of regulation, Stanford finally broke the deadlock in the 97th minute when Haley played the ball forward for Smith, who was making an overlapping run down the far flank. Although the ball was a hair behind Smith, she managed to take possession while maintaining her stride before turning toward goal. Facing goal, Smith put her entire body behind the shot, tumbling to the ground as her shot rolled under the arm of diving UCLA goalkeeper Kaylie Collins and into the back of the net for the golden goal.

The goal is Smith’s sixth on the season and her second game winner in as many games, as she also struck Stanford’s final tally in their 3-2 win over rivals UCLA on Thursday night.