Yesterday, U.S. Soccer and NWSL announced a partnership between U.S. Soccer, NWSL, Utah Royals FC and U.S. Soccer donors to provide 21 NWSL players with an opportunity to get into the professional coaching path by taking the U.S. Soccer C License Course, free of charge.

The 10-week coaching education experience will begin on September 30 at Zions Bank Real Academy Training Center in Herriman, Utah. The course is designed to provide the elite group of professional players with a true first-hand educational experience that will serve as their first step towards a career in coaching. The course begins with classroom learning, coupled with field sessions. This will be followed by an eight-week mentorship period at each participant’s home environment. The course concludes with a final in-person assessment back at Real Academy at the beginning of December.

“As the game continues to grow in the United States, we have a unique opportunity to develop the next generation of coaches from within NWSL,” said NWSL Managing Director Amanda Duffy in U.S. Soccer’s official release. “This is an exciting initiative that allows the League and U.S. Soccer to offer the C License Course specifically for NWSL players at the preeminent facilities of the Utah Royals FC,” she continued.

This offering is the first of its kind for NWSL players. Ali Krieger expressed her excitement on Twitter yesterday after the announcement went public.

I’m really looking forward to this opportunity and can’t wait to get started! @USWNTPlayers @NWSL https://t.co/SebGFVAY9G

“I’m really excited to begin this coaching course because I strive to be a good teacher of the beautiful game as a player and as a future coach,” said Krieger in the official release. “I know this is the best place to advance this journey and am grateful for the opportunity. I want to help the younger generation of footballers understand what it takes to reach their full potential, in both the physical and mental aspects of the game. It’s also very important to have a good understanding from a leadership perspective, how to get the best out of young players, and I’m ready to learn those specific tools during this course.”

CONFIRMED | We’ve signed a trio of American stars for the 2018/19 @WLeague season!

Sofia Huerta of the Houston Dash and Danielle Colaprico of the Chicago Red Stars have both joined Sydney FC for the upcoming W-League season in Australia that begins late October.

After being traded from the Red Stars to the Dash during the 2018 NWSL season, Huerta played 12 straight games for Houston, playing 90 minutes in all but one. She was also named to the NWSL’s Second Best IX this season. In Australia, Huerta previously played for Adelaide United in the 2016-2017 season. The 25-year old is excited to be back in the W-League and joining a new club.

“I want to win titles and I believe this is the best place to make that happen, the W-League is a great league and to be joining one of the biggest clubs in the competition is fantastic,” said Huerta in the club’s official release.

Colaprico, who’s W-League experience also comes from Adelaide United, joins Sydney FC after a strong year with the Chicago Red Stars. The 25-year old was a constant for a Red Stars team that made it to the NWSL semifinals before falling to eventual champions, the North Carolina Courage. For Colaprico, she’s excited at the opportunity ahead of her as she prepares for her third W-League season.

“I can’t wait to be back down under and get the ball rolling with Sydney FC,” she said in the club’s official release. “I’m excited by the opportunity to represent such a strong club and I’ve definitely got one eye on silverware this season.”

USWNT remains atop FIFA Rankings, Matildas climb to No. 6

In the latest FIFA World Rankings, the USWNT maintains the top position after a strong performance in this year’s Tournament of Nations. Australia climbs to the No. 6 spot after their success through World Cup qualification and ToN.

In addition to the the Matildas move due to their ToN success, England has moved into the No. 3 spot, which is up one place from their previous ranking. Sweden, in the No. 9 spot, has moved up two spots and enter the top ten on the back of their World Cup qualifying win against Denmark. Scotland is also up two places to reach No. 19, after qualifying for the World Cup for the first time.

So happy the paperwork is finally complete and I am OFFICIALLY a @JuventusFCWomen @juventusfc player! Grateful and excited to get on the field. ???? pic.twitter.com/USoaVkoB60

Yesterday, Juventus, of Serie A, announced the signing of American midfielder Ashley Nick.

Nick spent the last few months in Turin, Italy training with the club before her official signing was announced. Her most recent professional playing experience was with Sky Blue FC of the NWSL in 2016 before she left the club that June. The 30-year old has spent time with Sky Blue FC, Houston Dash, and Western New York Flash of the NWSL in addition to stints in Norway, Russia, and Cyprus at the professional level after graduating from USC and leading the Trojans to a National Championship.

Juventus, the defending Serie A champs, started their league title defense last weekend and are set to take on CF Florentina in their second game of the season tomorrow. Earlier this week they were eliminated from the Champions League.

English international Natasha Dowie signed a two-year deal with W-League club Melbourne Victory. She first played for the club in 2015.

The 30-year old is Melbourne Victory’s all-time leading scorer and said it was a no-brainer to sign this deal at Victory. “It was an easy decision for me because I’ve had a great playing career at Melbourne Victory,” said Dowie in the club’s official release. “It is by far the best club I’ve been involved in with regards to how they treat you as a player, I really feel like part of the furniture here.”

Victory head coach Jeff Hopkins feels confident that Dowie will continue to perform for the club and that she will continue to influence others around her. “She’s been a very important player for us over the last few years and I have no doubt that will continue into the future,” he said. “Her standards are high, which inevitably lifts everyone around her and she’s a great role model for the younger players.”

Melbourne Victory also announced that Laura Alleyway has extended her contract with the club until the end of the 2019-2020 W-League season. 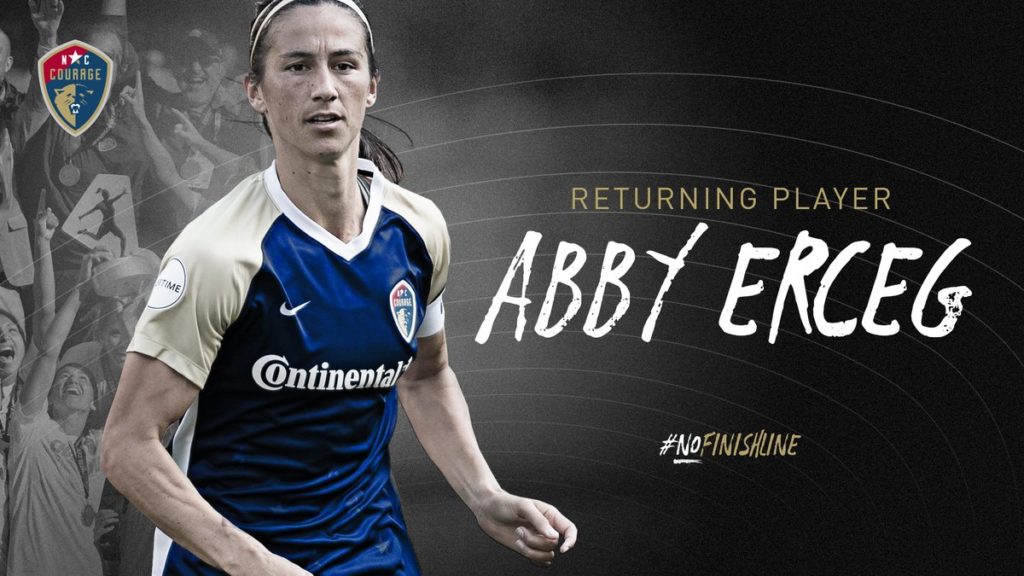 Despite winning the NWSL Championship, International Cup Championship and the NWSL Shield this past season, Abby Erceg’s work with the North Carolina Courage isn’t finished.

Erceg, the team’s captain, signed a one-year deal with the club Friday. She has been a member of the Courage for the last two season and was part of the Western New York Flash for the 2016 season.

In a press release, Erceg said her decision to sign was easy.

“Taking into consideration our success, the culture of the team and the support we receive, it left me very little option other than to sign for as long as I possibly could,” Erceg said. “I’m excited for the seasons ahead.”

Erceg was the only player for the Courage to feature in every minute of action, totaling 2,340 minutes in 26 matches including playoffs. Her statistics on defense were solid, giving North Carolina a boost, recording 125 clearances, 22 blocks and 53 interceptions. She led a Courage defense that allowed only 17 goals this season.

However, her work wasn’t just on defense, though. Erceg netted two goals in 2018, helping out the offense at times.

In the same press release, Courage head coach Paul Riley — who was just named NWSL Coach of the Year — said that it is “fantastic” for North Carolina to “ink our leader and defensive general” to a contract.

“Ability is what you’re capable of doing,” Riley said. “Motivation determines what you do. Attitude determines how well you do it. She is a thoroughbred in every department and has been an integral part of the Courage success story. Look forward to continuing the journey with such a fabulous player, selfless leader and true professional.”