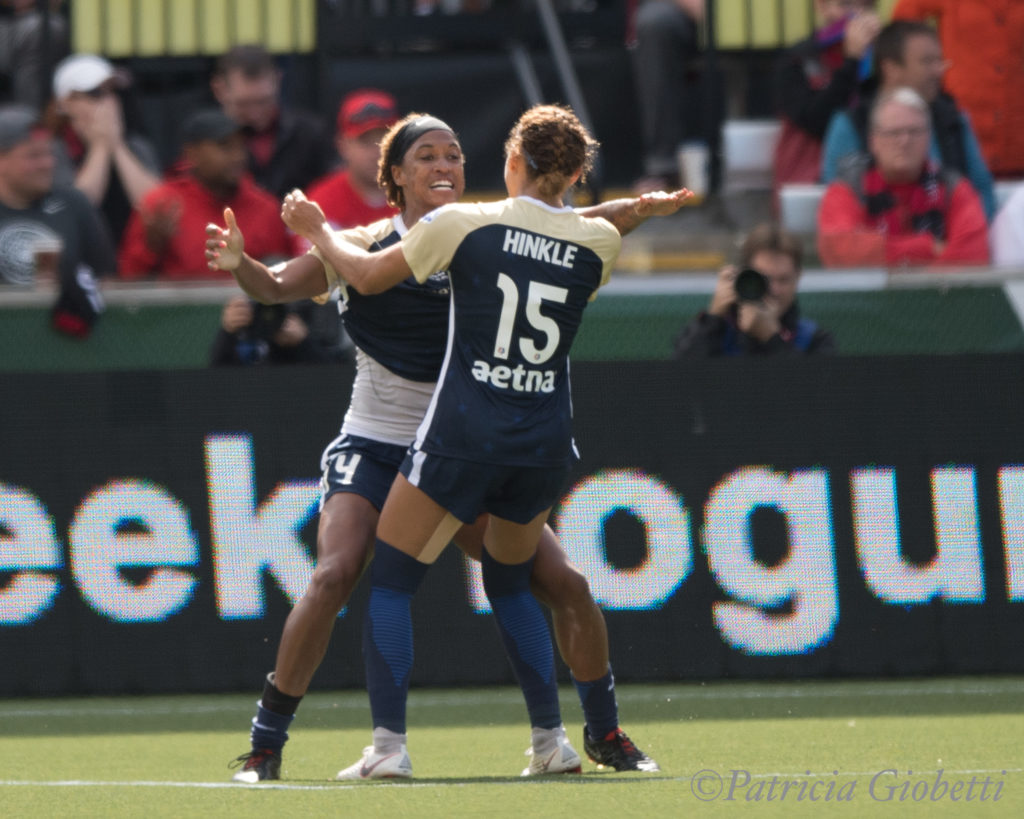 The North Carolina Courage have done what no other NWSL team has been able to do: win the NWSL Shield and Championship in the same season. Before a record-breaking sellout crowd of 21,144 fans at Providence Park in Portland, the Courage defeated the Portland Thorns FC, 3-0, to claim the franchise’s first NWSL title. Debinha opened up scoring for the Courage and Jess McDonald finished with a brace on the day.

The first half of the match was controlled by the Courage, who got on the board by scoring on the counter in the 13th minute. Crystal Dunn sent in a long ball to Lynn Williams, who fought off two defenders to fire off the first shot on the play. Her shot forced Thorns goalkeeper Adrianna Franch to take to air in attempts of making the save, only to see William’s shot deflect off the far post. Debinha ran into the box and headed in the rebound to give the Courage their first ever lead in an NWSL Championship.

Coasting on the momentum of Debinha’s goal, the Courage nearly doubled their lead moments later off another long ball played in, this time sent into the box by Jaelene Hinkle and intended for Jess McDonald. McDonald did manage to get her head on the ball, but she sent it wide of the post. She missed yet another opportunity, one strikingly similar to the first, in the 37th minute, and her frustration was evident.

However, McDonald managed to redeem herself in the final minutes of the first half, finally putting a header not only on target, but also past Franch and into the back of the net to double the Courage’s lead heading into the break. The goal-scoring play originated with an Abby Dahlkemper free kick, which was initially headed clear by the Thorns defense. Hinkle one-timed the ball into the box, where it took a fortuitous bounce that enticed Franch off her line as McDonald got her head on the ball, knocking it home.

.@J_Mac1422 gets a free header in the box and puts her name on the scoresheet. @TheNCCourage are rolling so far in PDX. #NCvPOR | #NWSL | #NWSLChampionship pic.twitter.com/Btt63C9kJw

Just before the break, Franch was visibly limping after clearing the ball. Minutes later, she took a seat on the turf and was attended to by a trainer while backup keeper Britt Eckerstrom warmed up on the sidelines. Franch stayed in the match, finishing out what was left of stoppage time before returning between the pipes for the Thorns in the second half.

Despite the scare of potentially losing their starting keeper to injury, Portland entered the second half looking much more like the Thorns seen during the second half of the season, and the team created a number of opportunities to get on the board in the first 10 minutes of the opening match. During one spell of possession in their final third, Christine Sinclair looked to have sent her shot off a teammate before Katelyn Rowland made the diving save to deny Tobin Heath of a goal.

Even with the Thorns looking more in control after the break, it would be the Courage that struck again. Williams fired a rocket of a shot in the 64th minute, but Franch gets just enough of a touch on the shot to send the ball out for a corner kick. On the resulting corner kick, the Courage went short, with Hinkle sending a soft pass to Mewis, who one-timed it over for Mathias. Mathias sent the ball over the field and McDonald, who just managed to stay onside by an inch, redirected the ball on target. Franch made a leaping attempt to make the stop and managed to get her hand on the ball, but she lept in the wrong direction and was unable to prevent McDonald from scoring her second goal of the match and the third for North Carolina.

That goal was the final goal of the match, despite a number of dangerous chances created by the Thorns, all of which were stopped by Rowland. At the final whistle, the Courage attack had combined for three goals while Rowland had made three saves to earn the clean sheet and the Championship win for the North Carolina Courage.