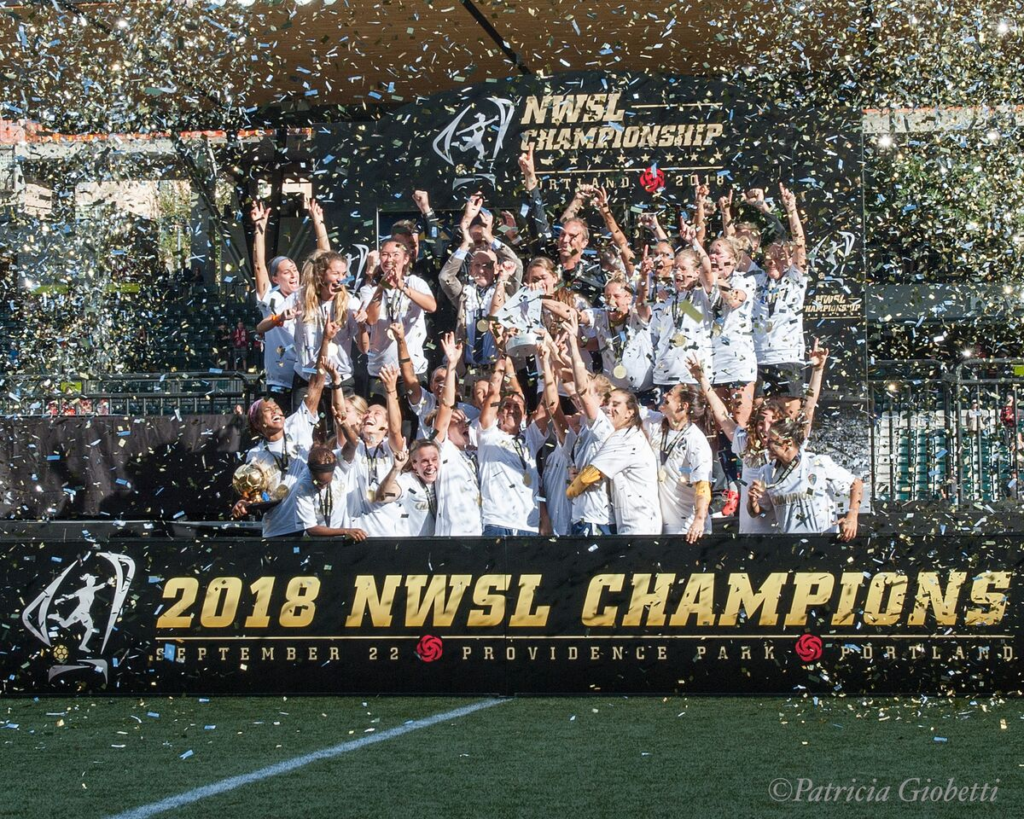 PORTLAND, Or. — The more they booed Jaelene Hinkle the better she played. And as the minutes ticked away, the Courage’s intrepid left back and her captain Abby Erceg exchanged a few glances on the field. They knew what was about to happen. The finishing touches were being put on the most dominant season ever in women’s professional soccer. The North Carolina Courage were about to be NWSL champions.

“No finish line was our thing this year but I think we just got over the finish line,” coach Paul Riley said.

When the Courage finished throttling the Portland Thorns in front of 21,144 strong at Providence Park—most of whom were in full throat supporting the other team—they completed a season that saw them lose once over 28 games if you include two playoff victories and two International Champions Cup wins. They set regular season marks for wins, points, goals score and conceded, and when a hurricane robbed them of a home semifinal, they flew to Portland and beat the Red Stars on Tuesday night in a mostly empty stadium. And then four days later they made a defiant statement about their superiority with a one-sided beatdown of a Thorns team that had not lost to any team besides the Courage since the last day of June.

“It was a really good performance,” Riley said. “We deserved to win the game. Midfield bossed it. We executed everything. I was really happy with the performance, more important than the result to be honest with you. But it really summed up the season. Sometimes you get to the final and it really doesn’t produce what you want and today they produced everything you could ask for.”

As for Hinkle, it was easiest to tell when she was on the ball because of the loud cascade of boos reverberating off the walls of the old stadium. Coach and player had a tough conversation during the week after a Tuesday game that was one of Hinkle’s poorest and one when Riley felt his team was outplayed for large stretches by the Chicago Red Stars.

“The last conversation I had was with Jaelene and I said ‘do the best you can and be strong out there,’” he said. “I thought she was phenomenal tonight. She wasn’t so good Tuesday night. I think she knew that. She got booed every time she touched the ball but it didn’t bother her tonight.

“I just saw her in the locker room. She had a few tears in her eyes, but she got it done today.”

“The semifinal I think there’s a little more added pressure because you have to win that in order to get to the final,” Hinkle said. “I think you loosen up as you get to the final because this is it. This is the last game so you almost have to play more freely. As a group we just said we were going to lock in and enjoy the moment. I think that definitely helped with being able to play my best.”

Hinkle was front and center around the few moments of the match that turned it from one the Courage were on the front foot to one they were close to putting away. In one of the rare moments when the Thorns looked as if they would have numbers up in the attacking third, Hinkle made a bold step toward Lindsey Horan. Hinkle did not win the ball but got enough of a touch to disrupt the attack. A few moments later Debinha was fouled by Tobin Heath. The ensuing free kick was cleared once, then taken on a one-time ball back in by Hinkle that Jess McDonald scored to make it 2-0.

“She’s had a phenomenal season,” Riley said. “I think that was a typical performance.”

The team with no finish line has finished, if only because there is nothing left for them to accomplish. The Shield. The International Champions Cup. And now the NWSL Championship.

“For this season, put a line under it, let’s move on and have a glass of champagne.”