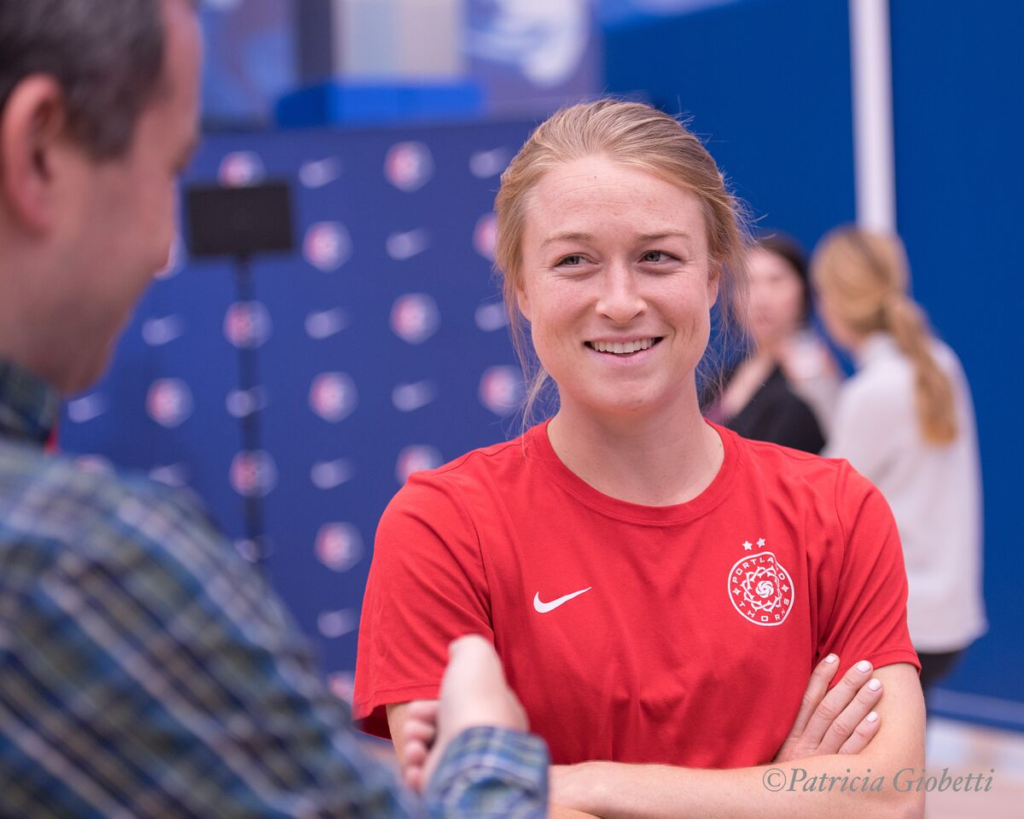 PORTLAND, Or. — Emily Sonnett had tape on her right knee and trained on the side during the 15 minutes of Portland Thorns FC training that was open to the media on Thursday. Other players on the side included Kat Reynolds who had MCL surgery over the summer, and Lindsey Horan among others. A Thorns spokesperson said it was a flexible session that not all players would be in full participation.

Sonnett’s knee has been the cause of speculation since she hurt it late in last weekend’s semifinal victory over Seattle Reign FC and was unable to see out the match.

The Best-XI selection said the injury was a classic case of planting her leg and having her knee go a different way. “It’s doing its best and forgetting the rest.” She added that there was a chance of continuing in Saturday’s match but because it was stoppage time, she did not want to take any chances or have time-wasting minutes added by the referee.

Rowland fine as well, no hints on starter

North Carolina Courage goalkeeper Katelyn Rowland confirmed that the concussion was landed her on the injury report for the semifinal took place during the second half of the regular season finale against the Houston Dash.

“The first few days were rough,” Rowland said Thursday. “But I feel great now and I’m ready. I was cleared a while ago and I’m back.”

Rowland backed up Sabrina D’Angelo in Tuesday night’s semifinal. The two have jousted for the starting nod over the last three seasons. It all started when D’Angelo broke her wrist warming up for a 2016 match against Sky Blue FC. Then then Western New York Flash then traded for Rowland to shore up the position while D’Angelo—who played the match immediately after breaking her wrist—recovered. D’Angelo then started the team’s two playoff games last season. Rowland was the playoff starter in 2017.

She added that her relationship with D’Angelo has helped ease any awkwardness or tension. “Me and Sabrina have a special relationship. We respect each other so much. If she plays I know it’s for the betterment of the team, and I know she’s so good. If I play I trust she has the same thoughts.

So who’s playing this weekend? Rowland wasn’t saying. In fact she said the coaching staff is expected to give the players the lineup on Friday.

A year ago Katherine Reynolds missed the start of the season injured and was hailed upon her return as the final piece that turned a good Thorns defense into a juggernaut. The Katherine Reynolds of 2018 has had an inverse trajectory. This time a midseason injury meant MCL surgery that rendered her a cheerleader for the playoffs.

“It’s getting better each day. It’s a slower process than I would like,” Reynolds said. A Wednesday visit with the doctor revealed that the 31-year old should be ready to return to full play in four to six weeks.

But when the injury first happened, Reynolds put herself on a different timeline—that had nothing to do with soccer.

As the big day drew nearer, the doctor upgraded that prognosis to maybe but Reynolds had made up her mind. “I said, ‘no, I’m walking down the aisle.’”

Reynolds did have to walk with a brace—she was able to shed it this week—but said it was not visible under her wedding dress. If she was limping at all, her family and friends said they didn’t notice.

As for Reynolds’ future, she still loves soccer but realizes it must end sometime and has yet to make a firm decision on what happens next. “To be honest I don’t know 100%. I need to really think about things. I believe I can get back to the form I was, and I believe I still have more in me. I still love soccer, I love the game, I love this city.”

Roccaro honored to push her teammates to be better

At Thursday’s training, two days before the final match of the season, Debinha approached Cari Roccaro and cracked a joke. “Don’t make me run today. You’ve been making me run all year.”

“That meant the world to me.” Roccaro said.

Roccaro was in preseason with the Houston Dash and was cut on roster deadline day. After a brief stint training in Seattle—not the best fit due to roster depth—Roccaro received a text from Courage coach Paul Riley. The next day she was in North Carolina and eventually signed a contract. Her role has mostly been as a bench player, or to make Debinha run during training.

“I am so honored that my role is to push these girls.”

Roccaro grew up playing for Riley on Long Island and said that playing on his team again made her realize she had dropped some of the good habits formed while playing for him years ago. Partly as a result of that she is now having more fun sitting on the bench in North Carolina than she did starting in Houston for parts of last season.

Players who ride the roster bubble like Roccaro are among those most affected when teams come in and out of NWSL. Roccaro said she has stopped thinking about it, and that she is not focused on what comes next. There is only one thing on Roccaro’s soccer mind at the moment.

“I’ve told everyone that’s asked me about my future – I just want to win this thing, celebrate with my team, reflect on it, and in a couple of weeks start fresh and think about my future.”

Halloran: Dissecting the Courage’s box midfield
Crystal Dunn is at peace with her versatility, and we should be, too