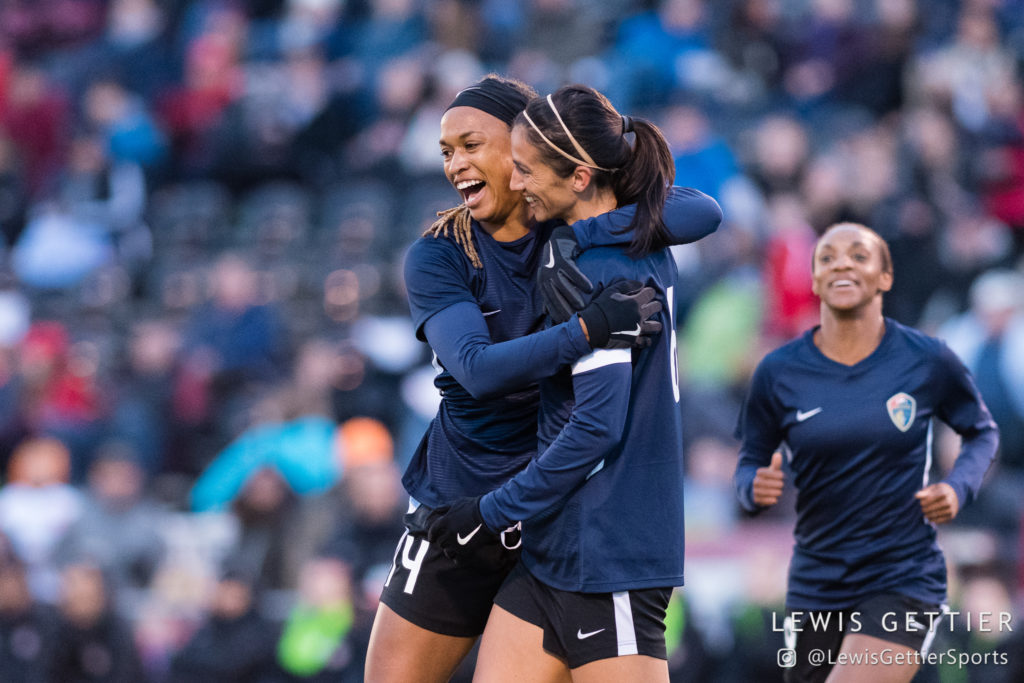 It was two days late and 3,000 miles from its original venue, but the North Carolina Courage overcame the obstacles to defeat the Chicago Red Stars, 2-0 on Tuesday night to advance to the NWSL Championship for a rematch against Portland Thorns FC. Jess McDonald scored the earliest NWSL playoff goal ever and Sam Mewis added a backbreaking laser from distance to account for the scoring. The match drew 4,646 to Providence Park in Portland where the match was rescheduled due to Hurricane Florence’s arrival in the Carolinas on the weekend. The game was originally set for Sunday afternoon at Sahlen’s Stadium.

The opening 10 minutes were wild and saw the Courage grab a lead and survive two encounters with the woodwork. The first was three minutes in after the Red Stars built up the right side. Morgan Brian whipped in a cross that was partially cleared off the head of Merritt Mathias. It fell to Yuki Nagasato who lined up a cracker that rang off the crossbar. Arin Gilliland recycled it and found Sam Kerr in the box. Kerr’s header was grabbed by Sabrina D’Angelo.

Two minutes later the Courage took the lead on a quick strike. Jaelene Hinkle won a ball near the left touch line and deftly played it forward to Crystal Dunn who was defended by Katie Naughton. Dunn turned Naughton and as able to play ahead to McDonald. The veteran forward beat Julie Ertz and then, with Naughton caught up field, Alyssa Naeher for her first career playoff goal.

The post got involved in the 9th minute. It was a deep turnover by the Courage where Mathias gave it away to Brian. The first touch from Brian went to Kerr who was well defended by Abby Dahlkemper. Kerr was still able to get a hard shot off and it ricocheted off the post and back behind D’Angelo and across the six-yard box before being cleared out of danger.

The Red Stars never came that close to scoring again. On the closest call of the second half, Kerr nearly won a penalty from Mathias but the contact was just wide of the area. The ensuing free kick had eyes for Brian at the far post but the ball eluded Brian who instead smashed into the post. Brian was shaken up but returned to the match.

In the 86th minute, Sam Mewis ran onto a recycled ball, stepped into it with all her weight, and scored one of the goals of the year to put the match out of reach for the Red Stars.

Sam Mewis for President? Here is the 85th minute goal that put the Courage up by two.#NCvCHI 2-0 pic.twitter.com/WBC4pn7Tdx

The Courage return to the final for the second time in as many years in North Carolina and their third straight dating back to their 2016 title as the Western New York Flash. They will play the Thorns who knocked them off 1-0 a year ago. The Red Stars, the only NWSL club not to have a losing season, are heading home semifinal losers for the fourth year in a row.