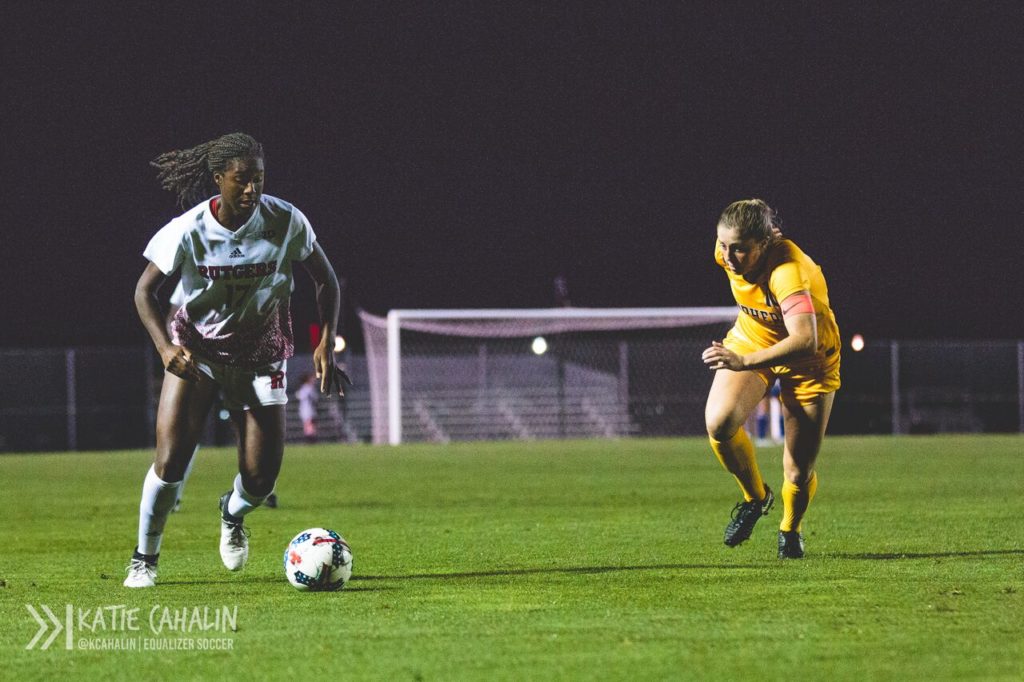 This past week in NCAA action marked the start of conference play for many teams, while others finished out their nonconference play. Hurricane Florence also wreaked havoc on NCAA woso, causing a number of games to be postponed until later in the season or cancelled outright. Even so, it was another weekend full of excitement in collegiate action.

The No. 7 Santa Clara Broncos snapped top-ranked Stanford’s perfect streak, drawing the Cardinal, 1-1, in a physical back-and-forth match on Sunday night that ended with five players sitting on yellow cards. Despite the end of their perfect season, Stanford’s undefeated streak is still going strong with a program best 30 matches.

The Cardinal were also without the services of U.S. defender Tierna Davidson, who suffered a leg injury in Stanford’s win over North Carolina last Sunday. Davidson was reportedly seen wearing a walking boot on Stanford’s sidelines over the weekend, although no official word on the extent of her injuries has been given.

Forward Sophia Smith’s stock is starting to rise again thanks to a strong start to her freshman campaign with the Cardinal, and the U.S. youth team star netted her fourth collegiate goal to put Stanford on the board in the 43rd minute. Smith capitalized on a lofted back pass by Santa Clara, using her first touch to take over possession before running through both Santa Clara center backs. Despite heavy defensive pressure from the Broncos, Smith angled a shot to the far back post, beating goalkeeper Melissa Lowder with the shot just before halftime.

WATCH | @sophsssmith breaks the tie with a brilliant individual effort. Can you say…PACE? Catch it on @Pac12Network.
?: 1
?: 0#GoStanford pic.twitter.com/8qmZFDNjSM

The Cardinal were able to continue their dominance throughout the second half, and Madison Haley looked to have doubled Stanford’s lead in the 51st minute, but the offside flag negated the goal. Instead, it would be Santa Clara who got on the board next after KiKi Pickett was whistled for a foul inside the box, resulting in a Santa Clara penalty. Stanford keeper Alison Jahansouz made the initial save against sophomore midfielder Alex Loera, but was unable to make a second to prevent Santa Clara defender Machaela George from knocking home the rebound.

From there the game stayed knotted at 1-1 through the remainder of regulation and two periods of overtime, which Stanford easily controlled but was unable to finish any of the opportunities created. That was largely because of Santa Clara’s defense, led by Lowder, who finished the match with 14 saves, one shy of her single-game save record. Her backline also added two goal-line saves of their own on the day.

The No. 15 South Carolina Gamecocks opened up SEC play in a commanding way, defeating the No. 11 Tennessee Volunteers, 2-0, on the road in Knoxville. Sophomore midfielder Lauren Chang put the Gamecocks on the board in dramatic fashion, sending in a bending corner kick that deflected off the far post and in for the Olimpico.

Take a look at Lauren Chang's bender to put the #Gamecocks in front 1-0 over No. 11 Tennessee!

Chang’s goal remained the lone tally of the match until the 74th minute, when freshman teammate Riley Tanner put away the insurance goal. Ryan Gareis played a cross into the box, which Simone Wark got a foot to touch it over to Tanner. Tanner buried the resulting shot to seal the win for the visiting Gamecocks.

The Rutgers Scarlet Knights kicked off conference action in a big way, coming from behind to defeat the Iowa Hawkeyes, 2-1, in double overtime. Sophomore Almirah Ali scored golden goal with just 11 seconds left in overtime to earn the late win for the home side.

Iowa got on the board first in the 22nd minute after Hawkeye redshirt junior Kaleigh Haus gained possession of a 50-50 ball deflected past the defense and broke away, firing off a shot from the top of the box for the game’s opening goal.

Sophomore forward Nneka Moneme equalized for the Scarlet Knights in the 74th minute, receiving a pass from Chantelle Swaby about 30 yards out and beating her defender with a run just inside the box, where she rocketed off a goal to bring the game back level, where it stayed until the final seconds of the second overtime period.

With the clock quickly counting down, Rutgers senior Kenie Wright sent in a lofted pass inside the six, which junior midfielder Nicole Whitley’s sliding touch knocked the ball past a Hawkeye defender for Ali, who buried the shot for the last-second game winner.

– Texas A&M 3, Kansas 0: After opening SEC action with a 3-0 win over LSU on Friday, the No. 4 Texas A&M Aggies wrapped up nonconference action on Sunday with a commanding 3-0 win over No. 18 Kansas on Sunday. Abby Grace Cooper, Addie McCain, and Ally Watt all scored for the Aggies, while goalkeeper Cosette Morche tallied two saves to earn the shutout.

– Auburn 7, Alabama State 0: The No. 9 Auburn Tigers continued their best start in program history, improving to 9-0-0 on the season with a 3-0 win over Mississippi State in their SEC opener on Friday night, followed by a rousing 7-0 win over Alabama State on Sunday. Bri Folds and Treva Aycock finished the weekend with two goals apiece, while Jessie Gerow, Taylor Troutman, Cami Rogers, Dani Solaru, and Rocio Sanders all contributed singles (an ASU own goal with the 10th tally for the Tigers on the weekend). Goalkeeper Sarah LeBeau’s solo performance earned Auburn the clean sheet Friday night before tallying the lone save to share the shutout against Alabama State with backup keepers Sophie Milich and Morgan Ramby.

– Massachusetts 6, Eastern Michigan 1: UMass had a big weekend, defeating Eastern Michigan, 6-1, on Sunday. Sophomore midfielder Jenny Hipp led the team in scoring on the night, tallying two goals and three assists in the match. Freshman forward Lauren Bonavita was second in scoring behind Hipp with a goal and an assist of her own.