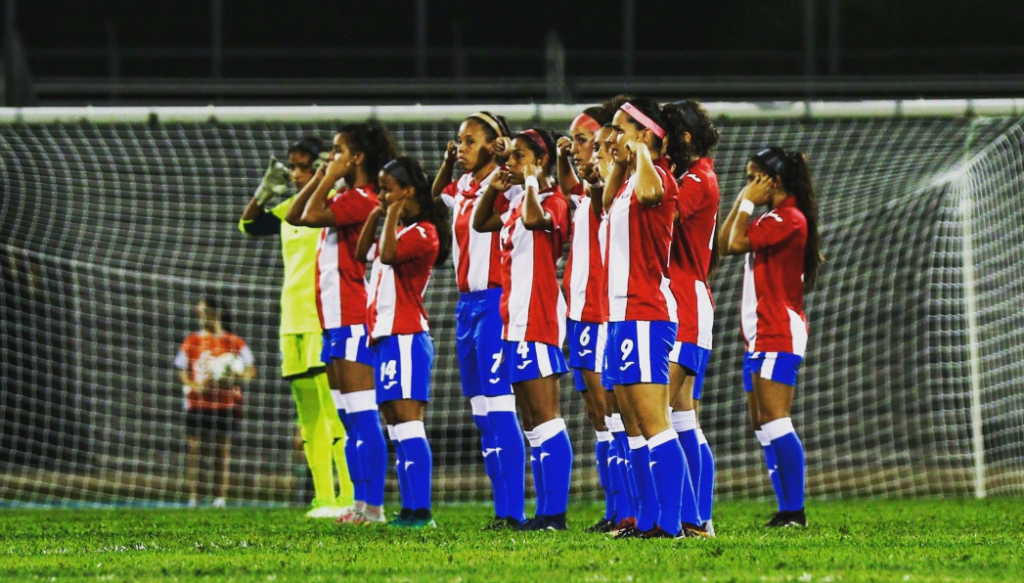 Puerto Rico’s women’s national team is the latest to join the worldwide movement for better playing conditions, publicly protesting its federation to call on what players say is a lack of support and lack of financial transparency.

The tipping point came on August 30, in the first of two home friendly matches against Argentina. The visitors took the opening kickoff and obliged in playing it out of bounds as Puerto Rico’s 11 starters assembled into a line – and reserves joined from the bent – as they pointed to their ears in front of a record crowd of 4,622 The gesture was intentionally subtle, says 26-year-old midfielder Nicole Rodriguez.

That’s exactly what happened. Word of the protest has since spread, and it has brought into question not only Federación Puertorriqueña de Fútbol’s care for its women’s national team program, but the location of funds from FIFA which are specifically designated for the development of women’s soccer.

The FPF receives funding from FIFA as part of the FIFA Forward program, which is designed to develop and support soccer across the globe. Member federations can receive up to $5 million USD per four-year cycle to support specific initiatives, of which the development of women’s soccer is mentioned by FIFA as a priority. FIFA Forward funds are supposed to be designated in such a way that certain finances are earmarked for specific initiatives. In order to continue receiving funding for a particular project, federations must continue supporting it. That’s simple, in theory.

Records, however, are a little less clear. They show that the FPF budgeted tens of thousands of dollars toward women’s soccer even in years that the senior national team was inactive. In 2013, for example, the senior team did not play a single match. Puerto Rico lists its women’s football budget for that year at $63,500. The only record of matches played by a women’s team that year is the U-17 team’s participation in the Caribbean Football Union’s qualifying event in the U.S. Virgin Islands, for the U-17 Championship.

More recently, the senior team was inactive in all of 2017, even as qualifying for the upcoming World Cup loomed. The federation’s budget indicates it spent $144,025 on women’s tournaments in 2017, when the only activity was a brief tour of the U.S. to scout players and play university teams.

Shek Borkowski took over Puerto Rico’s women’s program in early 2017. He is largely credited with helping turn around the fortunes of Haiti’s program. Emails obtained by The Equalizer show that Borkowski made several attempts to schedule friendly matches and had deals in place, only for the FPF to reject travel for the plans (which should have been covered by FIFA Forward funding) or negligibly not respond. The matches that Puerto Rico recently played against Argentina were supposed to happen in Argentina in March, but the FPF did not promptly respond to Argentina’s signed formal invite – also obtained by The Equalizer.

Instead, Puerto Rico assembled two days prior to the start of CFU World Cup qualifying in the Dominican Republic. Puerto Rico did not lose a match, but conceded twice late to Cuba and drew a game it needed to win to get out of the group. Cuba moved on and has since advanced to the final stage of World Cup qualifying in October. Rodriguez is convinced that better preparation would have yielded different results.

“We just sat down and it was like, this needs to change,” she said of that moment. “If we had proper preparation, and they took us seriously and wanted us to actually succeed – and gave us the resources to succeed – we would be really good. We didn’t lose a game; we tied two and won two. We’re missing the mark by a little bit every time, because we’re just not prepared.”

Multiple attempts to contact the federation did not produce a reply. Federation president Eric Labrador told the publication, El Nuevo Dia, this week that he did not understand the player protests, because they are treated well. But Labrador in June received a letter signed by 25 players that detailed some objectively basic demands.

The letter from the Puerto Rican players to the Federation [translated to English]. 25 players signed this (14 FT players and 9 U17s). pic.twitter.com/wAvBkhklVZ

Rodriguez said the letter was sent – and the idea for the protest formed – after several unsuccessful meetings in which players felt they weren’t being taken seriously.

“Our president and the people on the executive committee are politicians,” Rodriguez said. “They are very good at making things sound awesome, and they are very good at saying that they care about women’s soccer and that they care about developing us. They will say that until they are blue in the face. But if you look at what is actually happening, yes, there have been improvements – for sure. From the time I was 15 to now, yeah, there are improvements. But there are still so many basic things.”

Labrador stated in a recent assembly, per player accounts, that players would receive payments of $200 per game – the same as the men’s national team players. Rodriguez said she is yet to be paid anything, and has played in all six matches this year. Rodriguez, who teaches Spanish in a school setting in Colorado and whose entire family is from Puerto Rico, said that players had their flights and lodging covered for the most recent home games against Argentina. Players’ food each day came from a local Applebee’s restaurant. Training was a mix between a water-logged, muddy pitch and a couple of days on turf. Borkowski said World Cup qualifying preparation was largely confined to a 15×35-yard turf piece of turf.

Aftermath of Hurricane Maria is still the backdrop to reality in Puerto Rico, but the problems are systemic and long predate the 2017 Category 4 storm which killed nearly 3,000 Puerto Ricans. By January, Rodriguez says, soccer operations were relatively back to normal. 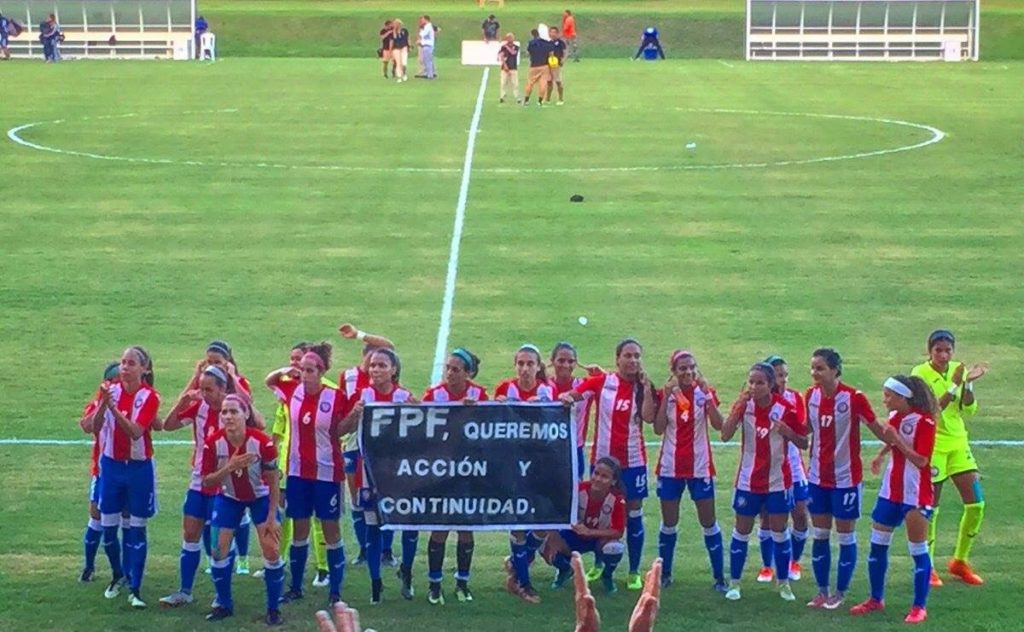 Borkowski is suing the federation for the final nine months of what he is owed from his contract; former coach Justin Campos is also suing the federation. These sorts of scenarios aren’t entirely new to Borkowski, who dealt with similar lack of funding and resources while in charge of Haiti’s women’s program. Similar issues in Trinidad and Tobago are well-documented, as they undoubtedly will be again next month, when lesser-funded Concacaf teams return to the spotlight of the U.S. for World Cup qualifying.

Borkowski, though, notes that Puerto Rico is even behind those countries organizationally. There’s no direction, no transparency in funding, and no way to plan. When he arrived in March 2017, he requested basic training gear – bibs, cones, speed ladders. The total spend was about $300. Borkowski said he was told there was no money for that, and after months of waiting, he bought the gear himself. It’s unclear if there is any wrongdoing in how FIFA funds are allocated, but at the very least, there appears to be a clear lack of transparency.

“A typical coach will have a budget,” he said. “He or she knows what they have available and what they can do, and they plan accordingly. With Puerto Rico, you just don’t have a budget. The president of the federation told me, ‘Hey you are in Puerto Rico, you will never know how much money you will have.’ And I was like, ‘So how do we plan for anything?’ ‘Well, you submit to an executive committee and they approve or they don’t.’ But of course, every time I would propose something, there answer is, there is no money.”

Borkowski went through a series of frustrations trying to schedule official matches, only to receive mixed messages from the federation. Puerto Rico, at various points over the past year, had games lined up with Argentina, Philippines, Jordan and Chile, but none came to fruition. (The recent Argentina games were finally scheduled in June, after players released their letter publicly.) When teams offered to come to Puerto Rico, Borkowski was told by federation officials to schedule away matches, since FIFA funding would pay for travel. When those road trips were lined up, funding them was suddenly an issue – even when the opponents offered to pay most of the expenses, as Jordan did after Hurricane Maria.

Inside the NWSL Players Association’s pragmatic approach to progress, unionization 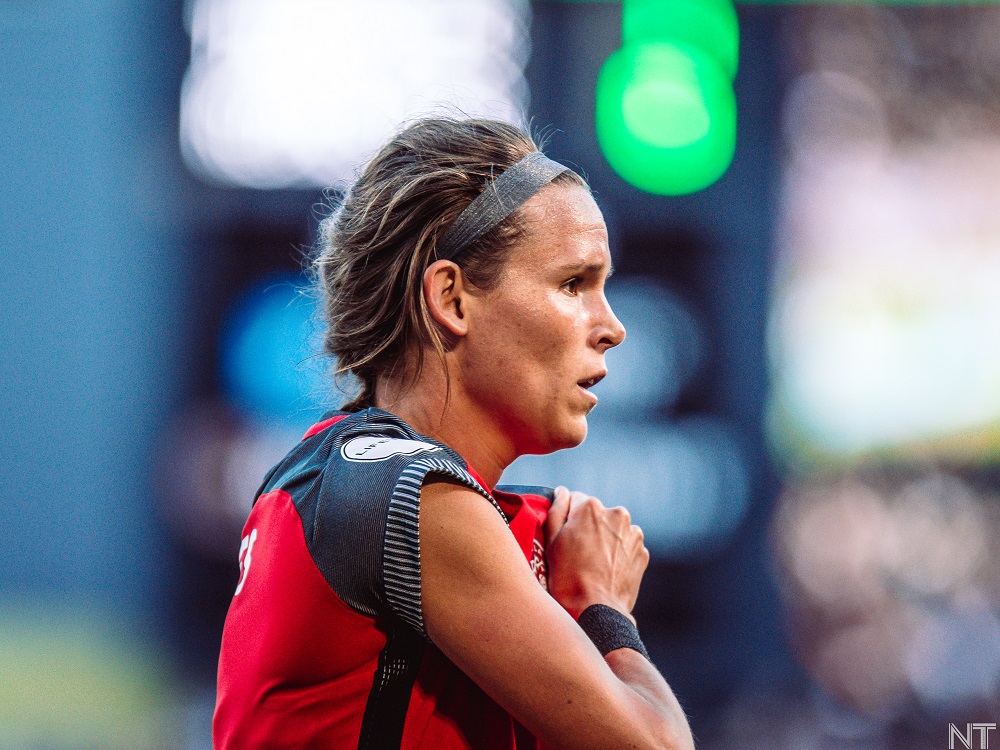 Maybe Puerto Rico will never make the World Cup or Olympics – Puerto Rico lost three games by a combined 25-0 at 2016 Olympic qualifying, including 10-0 to the U.S. – but that isn’t the point. They can never think about being at a World Cup without first achieving the benchmarks in between. And they don’t feel that they can achieve those with the current level of support.

This is the same kind of fight that has sprung up around the world. Rodriguez says she has heard from players in Europe and Asia who have expressed their support. U.S. Women’s National Team Players Association member Meghan Klingenberg reached out, as have Julie Foudy and Mia Hamm.

There’s a bond that has been created in this movement. Rodriguez and her teammates spoke with Argentina star Estefania Banini the night before that first friendly match, and an exchange they had in discussing Puerto Rico’s plan is one which Rodriguez won’t soon forget.

“One of the things she said that will stick with me,” Rodriguez said of her conversation with Banini, “is, ‘it’s unfortunate that this falls on you guys, but at some point, every women’s team is going to have to do this. This might not have benefit for you guys, but this starts what will lead to a betterment of soccer for your island.’ ”