Through tumultuous Sky Blue season, Cloud 9 remains loyal as ever 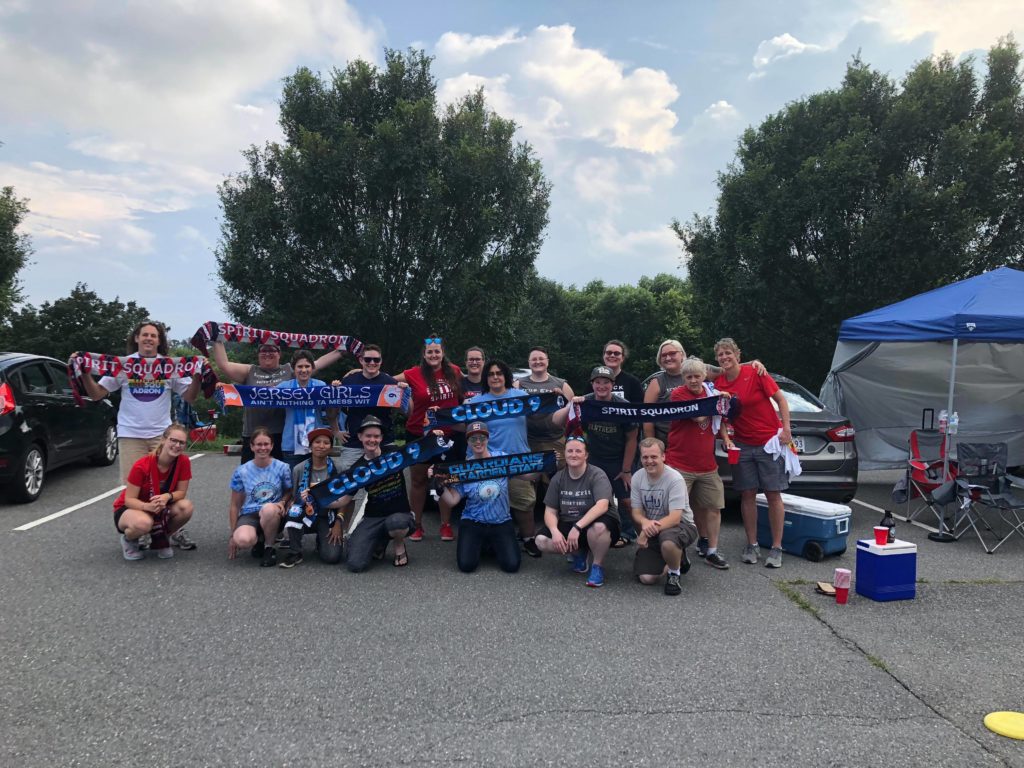 On the evening of Friday, July 27, a group of nine Cloud 9 members were settling in for the evening in their Chicago hotel when word reached them that Sky Blue FC, the team for which they are the official supporters group, didn’t make the trip. Heavy storms in New Jersey cancelled the team’s flight. The next morning, the National Women’s Soccer League announced the game was being postponed.

“By the time we got to dinner, we had learned that their flights were cancelled,” Jen Muller, leader of Cloud 9, said. “We were thinking of what their options would be. The more we saw all the flight cancellations, the less optimistic we got. I remember there had been some bad weather that week and all sort of flights were screwed up.”

The original plan had been for the group to watch the Saturday night match at Toyota Park and then drive back east through the evening to reach East Hartford, Connecticut, in time for the United States’ Tournament of Nations match against Australia. The postponing of the Chicago match — the first time Cloud 9 had taken a formal road trip there — allowed them to travel back more casually, including an overnight stop in Youngstown, Ohio.

If that sounds like an incident that would drive Cloud 9 to the brink, guess again. Despite bad travel luck to Chicago, and a little more last weekend when a day trip to Maryland turned into an impromptu overnight when that game against the Washington Spirit was also postponed, the group remains firmly behind the team that has one game left to try and pick up a solitary victory.

“It’s been difficult with the results and with everything that’s come to light, but it’s not difficult to support these players,” Muller said. “Our record aside, they’ve left it all on the field every game. Even in the blowouts, they’ve been playing their hearts out. There’s no way we can’t support them.”

Cloud 9 came together in 2015 and Muller said that of all the teams since then, the supporters group has the tightest connection to this one. On Wednesday, the day the team returned from Chicago — for the makeup game — where they were blown out 5-0, two days after the Washington match was pushed back, Sky Blue players appeared at a season ticket-holder event a cheerful as could be.

And therein lies the other side of the 2018 Sky Blue season. After Sam Kerr indirectly tore into club management as the reason she had asked for a trade, Cloud 9 put out a statement demanding change. A few weeks later, following reports of poor working conditions at the club, another statement came, this one calling for general manager Tony Novo’s job.

Muller said Cloud 9 may have more to say at the conclusion of the season, but was steadfast that they stand by the statements.

“We’re unfortunately not seeing much movement in response to that statement. There has been no communication from the team regarding it. I’m sure after the season we’ll have more to say, but we’re not going to give up on these players.”

Until then, there is one game to be played, and a Sky Blue loss or draw will leave the club in ignominy as the only Division I club in the history of U.S. Soccer — female or male, old NASL included — to complete a season without a single win.

“There came a point in the season where I really wasn’t looking at the record,” Muller said. “It was just focus on the team effort. That’s all I’m looking for [Saturday]. Obviously, we want to win. We want to win every game. But it’s not going to change anything if there’s still that zero in front of our record.”

Many Cloud 9 members are also part of New York Red Bulls supporters groups, and there were a slew of scheduling conflicts this season that made it difficult to get a full group. But Muller said the losing, the off-field turmoil, and even the bad travel luck, has not dampened spirits.

“I haven’t seen anyone say, ‘if they’re losing I’m not coming.’ Everyone knows that we’re supporters and win or lose, we’re there.”

NWSL Week 24 preview: Which Cascadia city will host a semifinal?
Thorns beat up on Reign to set up playoff rematch — in Portland