NCAA Week in Review: Week 3 shakes up the standings

The first several weeks of each NCAA season are full of non-conference action, which allows teams to travel around the country and take on opponents they may rarely face outside of the NCAA tournament. While some teams have easier non-conference schedules than others, using it almost as an extended preseason, others fill it with as challenging of competition as they can, often resulting in early season matches between highly ranked teams, which we saw this week in NCAA action.

Some of the mightiest teams fell and, as a result, there’s sure to be a good bit of shaking up on the newest NCAA rankings, out Tuesday. Here’s a quick recap of some of those biggest shake ups, as well as some of the best games of the weekend. 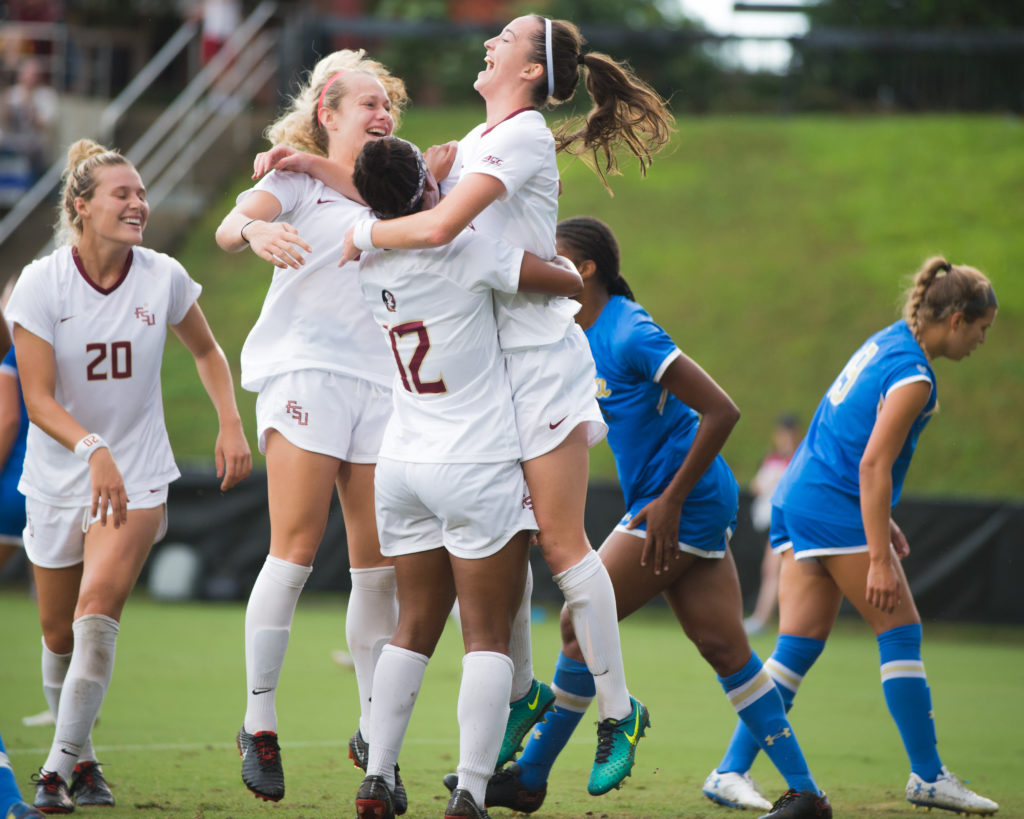 Florida State celebrate after a goal against UCLA. (photo by Colin Abbey)

After a scoreless draw against Florida on Friday, the second-ranked team in the country, UCLA, traveled to Tallahassee to take on the No. 4 Florida State Seminoles. Just as they were against Florida, the Bruins were without the services of two of their most dynamic players, Jessie Fleming (Canada) and Hailie Mace (U.S.), who were away on international duty. That, combined with the intensity of the young Seminole attack spelled catastrophe for the Bruins, who fell 4-1 to the home side.

Freshman Yujie Zhao led the Seminoles in scoring with a goal and two assists in the match. Anna Patten, Kirsten Pavlisko, and Kristen McFarland also contributed goals on the day. All four goal scorers for FSU were freshmen or sophomores.

Yujie Zhao, more like Yujie Wow. [touches ear] I'm told I am not the first person to think of this pun and I can't keep saying this for the next 4 years pic.twitter.com/waPGi05OC1

Maricarmen Reyes prevented the shutout with her goal for the Bruins in the 38th minute, her first of the season. The goal snapped FSU’s streak of not conceding a goal in 519:03, a streak that dates back to last season and is the fourth longest in program history.

UCLA freshman Maricarmen Reyes scored her first collegiate goal vs. FSU, but the Bruins lose their first of the season.

After a lackluster scoreless draw against UCLA on Friday night, the No. 22 Florida Gators fell at home to the No. 7 USC Trojans, 3-0. The Trojans, who were coming off of a scoreless draw of their own against FSU, scored three unanswered goals in the second half to secure the win. Redshirt sophomore Savannah DeMelo lead USC in scoring, contributing a goal and an assist in the contest.

However, it was senior forward Leah Pruitt who opened up scoring for USC with a strike from distance in the 66th minute. DeMelo then connected with freshman Penelope Hocking to double USC’s lead in the 80th minute, before scoring one of her own in the 82nd minute the seal the win for the visiting Trojans.

The West Virginia Mountaineers lost 2-0 at home to the Georgetown Hoyas in a Top 20 clash on Sunday afternoon. For the fourth time this season, the No. 17 Mountaineers went down a goal first when, in the 35th minute, a corner kick resulted in chaos in the box, which junior Meaghan Nally capitalized on for No. 11 Georgetown’s first goal.

WVU tried to battle back from behind but was unsuccessful, instead conceding yet another goal in the 75th minute. Kyra Carusa, who transferred to Georgetown after winning the 2017 College Cup with Stanford, found a loose ball in the box, used her first touch to turn towards goal and her second to fire her shot into the top of the net to seal the win for the Hoyas.

No. 8 Texas A&M Aggies defeated the No. 9 Santa Clara Broncos, 4-0, on Sunday in one of the biggest matchups of the weekend. Although the Broncos held the home side to a scoreless opening half, the Aggies unleashed a goal-scoring flurry in the second, starting with Ally Watt’s goal just minutes into the second half. The Aggies then put away three goals inside of four minutes, with Ásdís Halldórsdóttir, Jordan Hill and Emily Bates scoring in the 64th, 65th, and 68th minutes respectively. Texas A&M goalkeeper Cosette Morche recorded five saves on the night to earn the shutout, the fifth of the Aggies’ season so far.

A late goal gave Illinois the 2-1 comeback win over No. 14 Oklahoma State on Friday night. After dropping a goal to OSU’s Julia Lenhardt in the final second of the opening half, the Fighting Illini put away two second half goals to upset the visiting Cowgirls. The first of those goals was scored off sophomore Hope Breslin’s head in the 65th minute, while the second was put away by junior Arianna Veland in the 86th to secure the upset win for the home side.

The result is the second upset of the season for Illinois, who also downed the No. 3 Duke Blue Devils, 3-1, in Week 1.

– After three weeks of non-conference action, only 12 teams remain perfect on the season: Auburn, Boston College, Florida Gulf Coast, Louisville, Milwaukee, Mississippi State, Stanford, Texas A&M, UC Riverside, Virginia, Virginia Military Institute, and Washington State.
– Although no longer perfect after a scoreless draw against Montana on Sunday, North Dakota is the only team in the nation to have not yet conceded a goal.
– Ole Miss’s CeCe Kizer currently leads the nation in goals scored with seven. Eight other players are tied for second with five goals each, while Rutgers’ Almirah Ali rounds out the Top 10 with four goals.