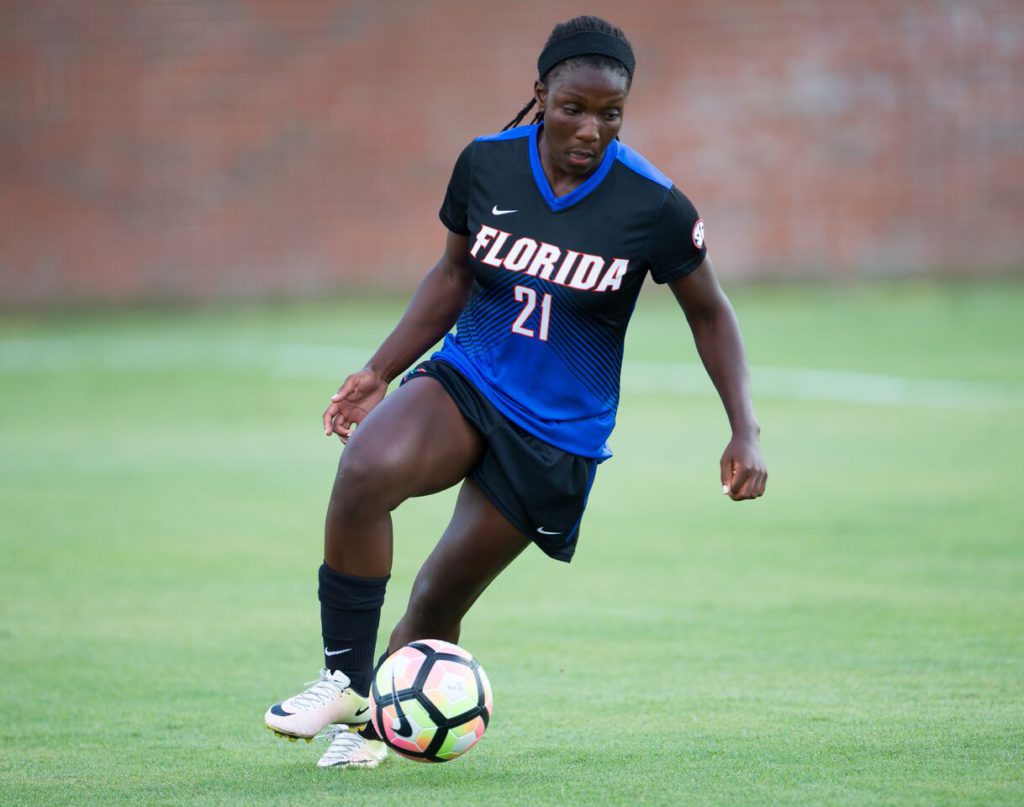 Neither the No. 22 Florida Gators nor the No. 2 UCLA Bruins could overcome a slow start or the loss of some of their stars to international duty, battling to a scoreless draw on Friday night in NCAA action.

The match was delayed 30 minutes as the officials arrived late to the stadium due to heavy traffic in Gainesville, and the first half seemed to follow the same slow precedent that established.

Florida was without sophomore forward Deanne Rose, who has only played in the Gators’ season-opening win against Washington, while UCLA was without Jessie Fleming and Hailie Mace. All three players were away on international duty with the Canadian and U.S. senior national teams, respectively, and the lack of attacking presence those three players bring to the field was noticeable from the match’s opening whistle.

Those two factors seemed to interfere quite a bit, as only two shots were taken in the entire first half, and both of those by Florida. However, that was not because of a lack of opportunity. The first one came in the fifth minute when Florida goalkeeper Kaylan Marckese took to ground to jump on a UCLA pass and made the stop but failed to collect, leaving the ball sitting loose inside the goal box. UCLA Bruin Ashley Sanchez eyed the chance, but Marckese realized her mistake and jumped on the ball before Sanchez could capitalize.

The only shot on goal in the first half came in the ninth minute when Florida’s Parker Roberts sprang Madison Alexander with a through ball into the 18, but Alexander’s shot was sent right to netminder Teagan Micah, who easily made the catch.

Moments later the clock was stopped after Gator senior Melanie Monteagudo was shaken up on a play inside her own defensive goal box, but the senior attacker was able to walk off with little assistance although she never returned to the match. UCLA was awarded a corner kick on the play, but Marckese plucked the set piece ball out of the air to prevent a scoring opportunity for the visitors.

The intensity cranked up dramatically in the second half, and the Bruins came out of the break looking much more like the attacking team they have proven they can be. In the 48th minute, freshman midfielder Maricarmen Reyes fired off the first shot for the Bruins early in the second half, forcing Marckese to make an impressive stop to deny the visitors from breaking the deadlock.

Florida had a dangerous opportunity five minutes later, when Tess Sapone created a turnover, giving Florida possession that ended in Lais Araujo firing off a shot, but her bending ball sailed just wide of the post.

UCLA created two of their best chances of the match off of a pair of corner kicks, the first of which came in the 70th minute. Anika Rodriguez sent in the set piece ball, but Marckese punched the service in away from the net. Reyes attempted to send the rebound back in, only to have her shot blocked by the Gator defense and sail out for another Bruin corner. The second corner went much like the first, with the initial service in being sent out from in front of the goal only to fall to Reyes, who once again saw her shot blocked.

Florida freshman Cassidy Lindley had the best scoring opportunity of the entire match in the 77th minute when she found herself on the receiving end of a through ball that lured Micah far off her line, resulting in Lindley with the ball at her feet in front of an empty net. However, the pressure and slight collision with Micah rattled the freshman, whose shot trickled just inches wide of the near post and the game remained scoreless.

The game was still scoreless at the end of 90 minutes, so the game was sent to overtime. Over the next 20 minutes, the two defenses livened up, holding Florida to just more shot and UCLA to three. At the end of overtime, the deadlock remained, and the game ended in a draw.

In all, UCLA came back from a completely uneventful first half to outshoot the Gators, 17-5 (8-1 SOG), but Marckese came up big with eight saves to earn the clean sheet.

UCLA next travels to Tallahassee, where they will take on No. 4 Florida State, while Florida hosts USC. Both of those matches take place on Sunday.