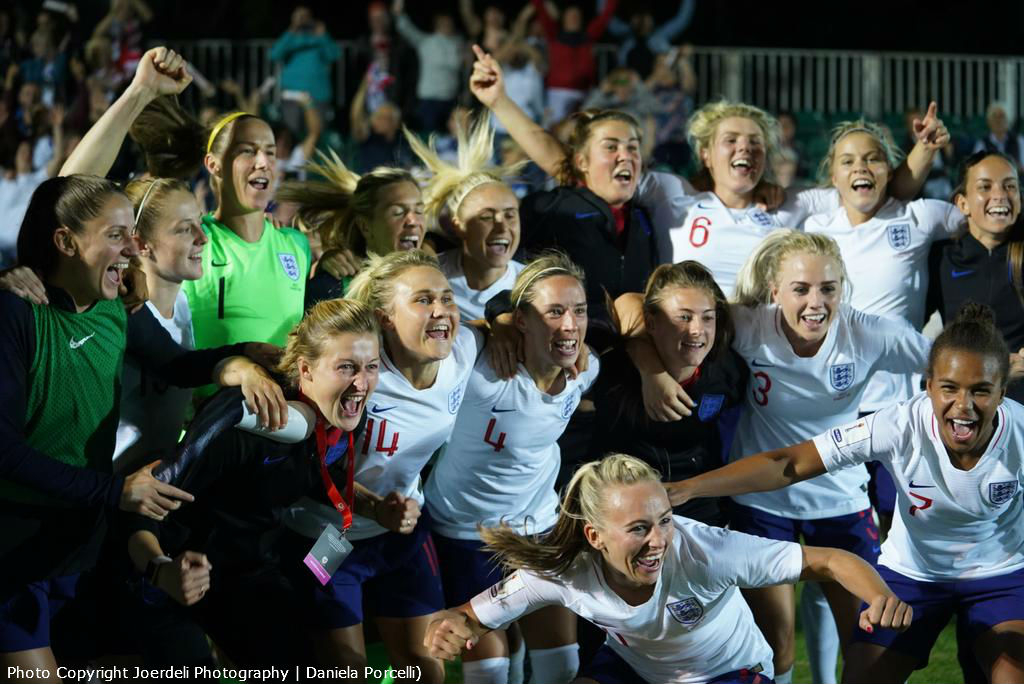 England scored three goals across 12 minutes to defeat Wales and book passage to the 2019 World Cup in France. The win-and-in qualifier was billed as the most important match ever for the Welsh women who have never been to a World Cup or European Championships. They kept it level through the opening 45—as they had done in a surprise 0-0 draw in England in April—but could not keep the dam from busting as the match became an hour old.

Toni Duggan opened for England on 57 minutes and Jill Scott made it 2-0 right on the hour. Nikita Parris put it away in the 69th minute. Seattle Reign FC midfielder Jess Fishlock played the full 90 for Wales but was unable to be the difference at Rodney Parade in Newport.

England are into their fourth consecutive World Cup after missing the 1999 and 2003 tournaments in America. They will be looking to build on 2015 when they went to the semifinals for the first time and finished as the third-place team. Wales are not out of contention yet but will need some results to go their way Tuesday to become one of four teams that will advance to a playoff tournament for Europe’s final place in France.

Slovakia 0-4 Norway: Norway cruised in Slovakia to set up a juicy finale to Group 3 play against Netherlands on Tuesday in Oslo. The winner will advance to the World Cup with the Netherlands going through with a draw. Both teams remain in strong contention to be in the playoff should they fall short. Lisa-Marie Utland had a hat trick for Norway including an 11th minute goal to get them on the right foot. Guro Reiten scored the other goal for Norway.

Spain 5-1 Finland: Spain cruised to remain perfect in group play and dashed what were already infinitesimal chances for Finland. Marta Corredera scored twice for Spain while Jennifer Hermoso and substitute Nahikari Garcia also scored. Finnish keeper Minna Meriluoto contributed an own goal for Spain. Finnish captain Linda Sallstrom accounted for her side’s goal which made it 1-1 for a short time midway through the first half. Spain, already qualified, must beat Serbia at home Tuesday to complete Group 7 a perfect 8-0-0.

Ireland 4-0 Northern Ireland: Ireland finished on a high note by blasting their geographical and political rivals. Leanne Kiernan and Katie McCabe had the home side up 2-0 after 12 minutes and they each added a second. Both teams were already eliminated ahead of the match.

Belarus 1-4 Poland: Poland scored just before and just after halftime en route to an easy win in Belarus. Agnieszka Winczo opened in the 44th and Ewa Pajor made it 2-0 in the 47th. Ewelina Kamczyk and Pajor again added goals. Anastasia Shlapakova accounted for the Belarus goal. Both teams were already eliminated.

Czech Republic 2-0 Slovenia: Katerina Svitkova and Petra Divisova scored to keep Czech Republic alive even if only mathematically. In order to reach the playoff, Czech Republic must win away to group leader Iceland and get lots of help including Germany losing to Faroe Islands.

The Washington Spirit season ends on Saturday and they will be missing several players to United States national team and U-23 camps. As a result the club has added six National Team Replacement players for the season finale against Sky Blue FC. Included in the group is Tiffany McCarty, the first player the Spirit ever drafted in 2013. The second overall pick spent a season in Washington before being exposed to and selected by the Houston Dash in the expansion draft.

Former FC Kansas City midfielder Alexa Newfield has also been called in by the Spirit as have Brenna Connell, Zoe Clark, Megan Crosson, and Morgan Ruhl.

Marta ruled out of Brazil matches

A thigh injury has prevented Marta from joining Brazil for Sunday’s friendly against Canada. The news was reported by Meaghen Johnson on TSN.

Marta will not play in Ottawa vs #CanWNT this Sunday. Did not make the trip due to injury #CANBRA

In a second tweet, Johnson said the injury happened during training with the Orlando Pride this week. Sunday’s match is at TD Place in Ottawa.

The Lowdown: A wide spectrum of priorities as the NWSL regular season ends
USWNT wins a weird one over Chile