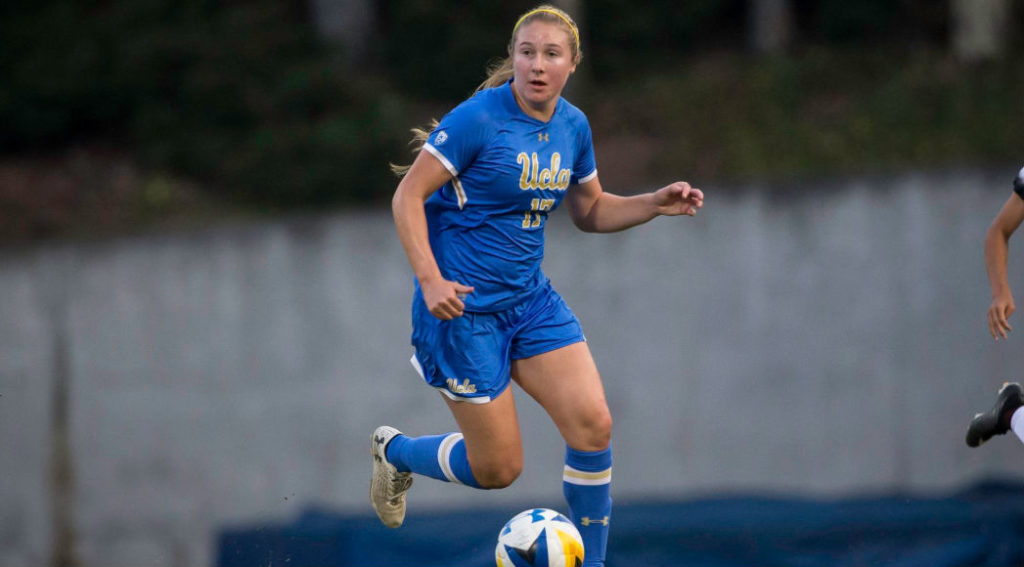 The 2018 NCAA season is already living up to the hype, with some exciting action coming out of just the second week of the season. Two Top 3 teams battled it out in dramatic fashion on Friday night to really get the weekend going, while a couple of other ranked teams tasted the disappointment of early defeat. Here’s a quick recap of some of the weekend’s biggest games.

On paper, this match looked to be one of the most exciting of the weekend, as the No. 3 Penn State Nittany Lions hosted the No. 2 UCLA Bruins. On the field, it didn’t disappoint.

Sophomore Ashley Sanchez opened up her scoring account for the year when, just a minute after entering the contest, she dispossessed a Penn State defender and caught goalkeeper Amanda Dennis off her line. Sanchez, who had been competing with the U.S. in the U-20 World Cup, fired off a left-footed shot from just outside the box that Dennis was unable to save, scoring with her first touch of the season. Penn State pulled back level just a minute later via penalty, with redshirt senior Emily Ogle converting from the spot to send the game into the break 1-1.

The final goal of the game was not without a little controversy. In the 70th minute, UCLA’s Delanie Sheehan sent in a long cross from the far side of the field that was caught by a leaping Dennis, who was moving backwards to make the two-handed catch. However, her momentum carried her, and the ball, fully across the goal line, and after a review, Sheehan was credited with the game-winning goal.

At the time of publication, the game can still be streamed on WatchESPN with a login, so if you get a chance, check it out.

It was a bad weekend for the fifth-ranked Florida Gators, who suffered their first two losses of the season at the hands of Ohio State and Oklahoma State. In Sunday’s match against No. 19 Oklahoma State, the reigning Big 12 champions, the Gator defense tried to back bounce back and did well to hold the opponents scoreless to send the game into double overtime, but their offense struggled to create many chances on goal. As a result, it was a golden goal by OSU senior forward Marlo Zoller in the 103rd minute that was the difference maker, earning the Cowgirls their first ever win over Florida and keeping them perfect so far on the season.

In another upset over the weekend, the unranked Butler Bulldogs took down the No. 20 Notre Dame Fighting Irish, 4-1, on Sunday. The two teams were pretty evenly matched throughout the match, with each goalkeeper finishing with five saves while Notre Dame just outshot Butler, 16-15. However, it was the shots on goal that did Notre Dame in, with Butler putting three more on target than the Irish.

Senior forward Paige Monahan finished the day with a brace, giving Butler the early lead in the second minute before finishing with a second in the 89th minute. Her goals bookended second-half singles by Morgan Kloosterman, her third of the season, and Katie Soderstrom. Notre Dame was able to get on the scoreboard in the 69th minute courtesy of Olivia Wingate, but it was too little, too late, and the Bulldogs would win in convincing fashion.

The 10th-ranked South Carolina Gamecocks started the weekend with a 1-0 shutout over rival Clemson, but they couldn’t end the weekend as well as they started it, losing 1-2 on the road to No. 16 North Carolina State.

The two teams battled to a scoreless first half, but it would only take five minutes after the break for the Wolfpack to get on the board. Maxine Blackwood sent the ball in from the right side of the box, and Kia Rankin fought to maintain possession before sending a falling shot towards goal that Tziarra King got a foot on to redirect just enough to prevent South Carolina keeper Mikayla Krzeczowski from making the save.

We see you @PackWSoccer! Early second-half goal puts the Pack up 1-0 over No. 10 South Carolina. #GoPack

Rankin would then get on the board herself in the 63rd minute, putting away the game winner off a long ball from Jenna Butler. South Carolina got one back in the final 10 minutes of the contest via a set-piece goal from Claire Griffiths, but they were unable to find the equalizer and suffered their first loss of the year.

– No. 6 FSU defeated Middle Tennessee, 3-0, on Sunday to set a program record with their fourth consecutive shutout to start the season.
– The USC Trojans earned one of the biggest wins of the season, beating Pepperdine, 5-0. Savannah DeMelo recorded a brace and an assist in the contest.
– Junior forward Brooklyn Rivers scored a hat trick for Louisville in their 3-1 win over Michigan.