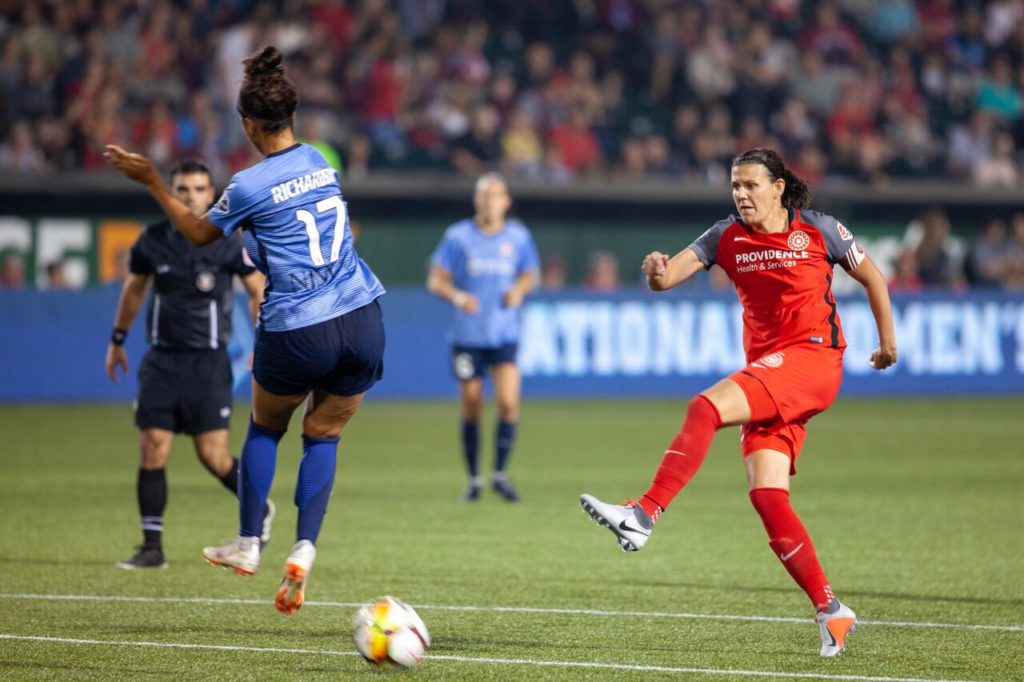 .@ThornsFC needed three points to punch their ticket to the #NWSLPlayoffs and they did just that in a 2-1 win at home over @SkyBlueFC. #PORvNJ Highlights ↩️ pic.twitter.com/WrszhQoH7L

The Portland Thorns successfully clinched a third straight National Women’s Soccer League post-season berth with a well-fought 2-1 win over the visiting Sky Blue FC, who couldn’t break through towards getting what could have been their first win of the season. Christine Sinclair and Tobin Heath notched goals for the Thorns, and Sarah Killion got one back for the New Jersey side, which fell to 0-15-5.

The match began with Portland on the front foot, getting good movement in front of Sky Blue’s goal early and often, and the pressure paid off in the 13th minute. With Lindsey Horan making a run at the edge of the box, Erica Skroski came in for a hard tackle that brought the midfielder down. The ref pointed to the penalty spot, Sinclair stepped up to take the shot, and left Sky Blue keeper Kailen Sheridan looking with a calm, low strike into the back of the net.

After the inital strike, the Thorns had multiple chances to double their lead, but had trouble finding the final shot (or were disrupted by a very physical game-plan from the visiting squad), and the first half would end with a 1-0 score-line.

The second half started with Sky Blue working their way into the match with more linking possession, but without finding a way to really put the Thorns in any serious danger. And in the 54th minute, Heath took a free kick from outside New Jersey’s penalty area following a foul in the midfield that slid through the Sky Blue defense to double Portland’s lead. The ball was likely intended to find the head of Lindsey Horan, and while it missed the MVP-candidate’s run, her presence caught Sheridan in the middle of two decisions, and the ball bounced untouched into the back of the net.

It looked like Portland was going to cruise to the final whistle with a shutout, but Sky Blue had just enough offensive power to make the final minutes interesting. In the 85th minute, a ball sent in for Imani Dorsey in the box fell back to Sarah Killion, who sent a rocket past Adrianna Franch to pull her team within one of finding an equalizer. However, ultimately the rest of the match would end without incident and the Thorns had sealed the deal to make another run into the postseason.

Amy Rodriguez scored in the 12th minute and Utah Royals FC stuck their noses into the top four with a 1-0 victory over the Washington Spirit on Wednesday evening at the Maryland SoccerPlex.

The Royals moved to 32 points, one clear of the Chicago Red Stars, but the Red Stars play the Orlando Pride on Saturday and one those two is guaranteed to move ahead of the Royals, who do not play again until their season finale Sept. 8.

The Spirit failed to win, or score, in their first match under interim head coach Tom Torres. In doing so, they set and equaled several dubious records including a new futility mark for minutes at 604, knocking the Houston Dash off that perch. The Spirit’s sixth consecutive match being whitewashed tied a league mark shared by the Dash and Boston Breakers (the Breakers did it across two seasons). And their 13th consecutive match without a win equaled a club record set in 2013.

The goal was the product of the Royals pinging the ball around in their attacking third where eventually Katie Stengel switched the point to find Christen Press on the righthand side. Press swung a ball in for Rodriguez whose initial shot was saved by DiDi Haracic, but the rebound was put away for the only goal on the evening.

The Royals (8-7-8, 32 pts.) clinched at least a .500 season but even sitting fourth now, could be eliminated from playoff contention by the time they host the Red Stars on the Sept. 8 season finale. The Spirit (2-16-4, 10 pts.) will host Portland Thorns FC on Saturday night at Audi Field.