Lauletta: Gabarra’s legacy is more than the Spirit’s woes, but it was time for change 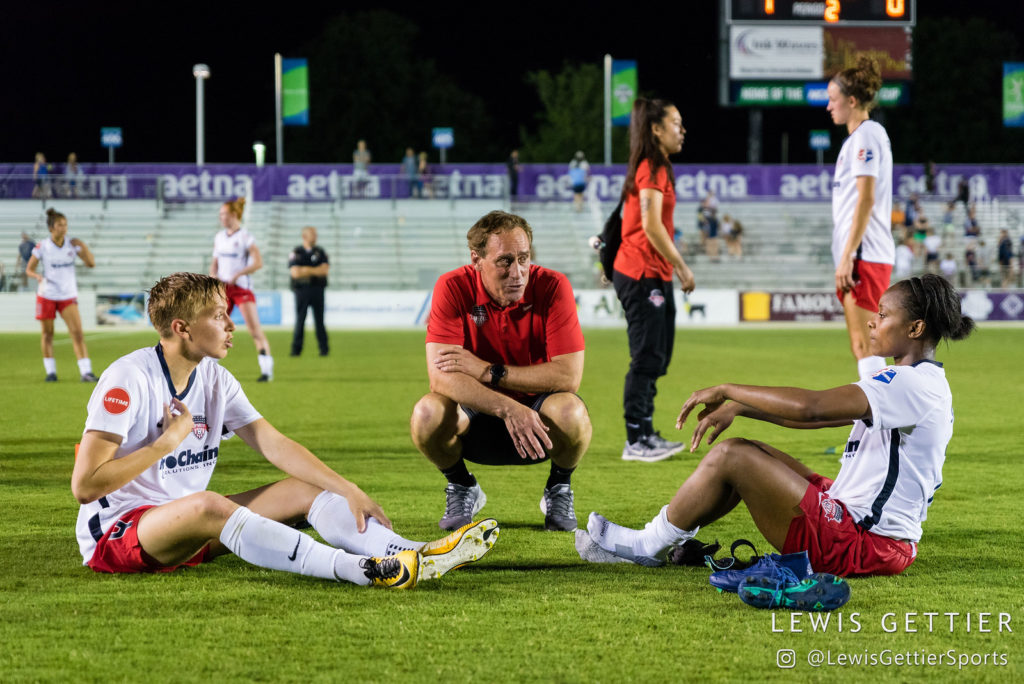 The Washington Spirit lowered the boom on Jim Gabarra on Tuesday, bringing to a close a head coaching tenure that began with near misses of both National Women’s Soccer League trophies and then quickly deteriorated to the current 12-match winless streak that includes a single goal over the last 11 games. Gabarra told the players himself early Tuesday morning, then hugged each of them and left, per a team source.

The Spirit host Utah Royals FC on Wednesday night and then Portland Thorns FC on Saturday in a much anticipated match at Audi Field. Assistant Tom Torres was named interim head coach.

Here are my thoughts from the first, and likely only coaching change of 2018 season.

It was time for a change

Last Friday’s 4-0 loss in Houston was definitely a get-your-coach-fired type of performance. The Spirit were mostly listless in the first half, and when Mallory Pugh went off after halftime, as part of managing her recovery, they became entirely listless. The Dash scored some phenomenal goals, but the space allowed to Sofia Huerta for her run through midfield — and then the lack of anyone marking her as she got in position to take a return pass and shoot — was entirely unacceptable. If anyone besides Pugh won a 50/50 ball, I didn’t notice it happening.

That match was just the culmination, though. The Spirit have been taking on water since mid-May, and once Pugh got injured — also in Houston — things spiraled completely out of control. The additions of Rose Lavelle and Andi Sullivan this year have done little to help the squad. Lavelle is still trying to find fitness, but No. 1 overall pick Sullivan has not had a particularly good rookie season despite being capped internationally before entering training camp, and she appears to be on the wrong side of Jill Ellis’ radar at the moment. Canadian Rebecca Quinn has been similarly average despite significant international experience ahead of her rookie season.

During the current unbeaten run, the midfield has rarely defended well enough and the team as a whole has not exhibited enough bite to win matches in a league where the margins are razor thin. And while every team conceded poor goals, the Spirit have been on the wrong end of some of the worst this season. There was the ball that squeezed inside the near post off a set piece even with Meggie Dougherty Howard posted right there. And there was the giveaway by Estelle Johnson as she possessed the ball unchallenged in her own defensive third with at least 20 yards of space in front of her, to put herself in a better position to find a teammate.

Saturday night’s match against the Thorns was always the most important of the season from a business sense. The Maryland SoccerPlex is quaint, and the sightlines are amazing, but a peek into the future of the NWSL — or at least what everyone hopes that future will be — is one where the Spirit will be too big for the Plex. If I had to guess, ownership wanted to make sure there was a bit more energy from the players for that game, and ultimately decided the best way to do that was a change at the top of the soccer department.

A note on Jim Gabarra’s legacy

When Week 22 kicks off, it will be the first one when none of the head coaching jobs in the U.S. top flight is filled by Jim Gabarra. And that’s not just NWSL. Gabarra was the coach of the Washington Freedom for three seasons in WUSA, and then for two seasons in WPS before moving to Sky Blue FC for that league’s final season. The way it ended in Washington is an albatross on his resume, but it does not tell the entire story on or off the field.

On the field, Gabarra helped turn the Freedom from also-rans in 2001 into finalists the next two seasons, including Founders Cup champions in 2003. He drafted Abby Wambach No. 2 overall in 2002 and helped in her transformation to what many believed at that time was the best player in the world. In 2003, Wambach and Mia Hamm were the best pair of defensive strikers seen in American women’s soccer, and they were a treat to watch terrorize opponents on both ends of the pitch. Deeper on those teams, Gabarra cultivated the outside-back tandem of Skylar Little and Emmy Barr — both roundly criticized as rookies in 2001 — into serviceable players that helped him land the title.

When WUSA closed its doors, Gabarra and the Freedom did not. He took the side into the USL W-League, where they flew the flag of the D.C. area for several years and won a championship in 2007. Years later, when WPS folded and Gabarra was at Sky Blue, he remained in the New Jersey area for a year to coach the New Jersey Wildcats, also in the W-League, even though it meant spending another summer away from his family back in the D.C. area.

Gabarra then took over at Sky Blue again for the formation of NWSL and had the 2013 side near the top of the table until a series of injuries ravaged them. They eventually finished fourth and lost in the semifinals. He left Sky Blue to return to Washington in 2016 and inherited a quality side that played the beautiful game in his first year with the Spirit. For the NWSL Championship, he made a bold tactical adjustment by lining up with three center backs in a 3-5-2 that was not quite as in vogue has it has become in the two years since. The gambit came within seconds of paying off until a late equalizer conceded and some poor penalty kicks left the Spirit heartbroken.

A mass migration followed the 2016 season. Many pegged it on owner Bill Lynch’s decision a month earlier to play the national anthem before the players were on the pitch in an effort to prevent Megan Rapinoe from kneeling in protest while it played. But the reality is that Gabarra had lost his connection to the locker room. Despite some crafty work to add some talented players for 2018, it seems he was never again able to get through. The results this season were horrifying.

Extra: Why the NWSL needs Houston, Orlando to get it right

Jim Gabarra’s NWSL record stands at 43-57-31 and those 57 losses are the most in league history. Adding his WUSA and WPS marks, he was 90-107-59 overall, coached six playoff teams, three finalists, and the 2003 WUSA champions. He also regularly stocked his staff with top-level female assistants, including Denise Reddy, who this season became head coach of Sky Blue. At the time of his firing, Gabarra’s staff included Briana Scurry and Kati Jo Spisak, both of whom played under Gabarra in WPS.

The club’s statement said the search for a new coach would begin after the season, which for the Spirit ends Sept. 1. I’m not personally well versed enough on the pool of coaching candidates to have much of an informed opinion on who might come next. Lisa Cole comes to mind. The former Boston Breakers and international youth coach has served as a Spirit scout over the last few months. Tom Torres, the interim coach, will hardly have enough time to make a case by Sept. 1, and sometimes, in these situations, ownership looks to cleanse the staff of all remnants of the prior regime.

The main ingredient in a new coach will be finding someone able to get through to the triumvirate of Pugh, Sullivan and Lavelle. Results aside, the Spirit have the foundation to be built into something special over the next few years. The Estefania Banini-Francisca Ordgega tandem has spent too many seasons chasing potential while trying to stay healthy, and it could be time to alter the philosophy with the international spots.

Ashley Hatch is another player that can be built around. She is not the most complete striker out there, but works hard and gets her head on nearly everything in the air. She has been isolated this season, but has quietly been one of the better players on the team. We don’t know how much of a locker room rebuild the Spirit need, but from a personnel standpoint, it is not as great as the 2-15-4 record would suggest.

As for Gabarra, I don’t see another NWSL job in his future, but his tactical acumen and deep knowledge of the game would make him an ideal candidate at the college level. Or maybe he finds something on the men’s side, or maybe he decides his coaching career is over.

EXTRA: In the Dash, the Spirit have a blueprint for a quick turnaround

NWSL Week 22 preview, part 1: Seattle closing in on playoffs
Dash of unconventional thinking might be just what Spirit need