Sam Kerr got the Red Stars off to a two-goal lead in search of Chicago’s first win against Portland since 2013, but a second-half comeback by the Thorns forced them to split points. Both sides started out with familiar lineups, although Rory Dames had his fullbacks, Arin Gilliland and Casey Short, switch from their normal flanks.

The game was end to end from the start as both sides pressured hard. The first real chance came in the 20th minute, when Lindsey Horan was, unsurprisingly, wide open on a free kick, but Naeher was there to make the save. On the other end, Kerr was often the target, nearly opening the scoring early on when she got a step on the backline and her pressure forced Franch to spill the ball, but Meghan Klingenberg was there to make the clearance before anyone could capitalize on an open net.

Just before halftime, Emily Sonnett received the ball around the midfield line and was caught in possession by Kerr and Yuki Nagasato. Kerr poked the ball free back toward Nagasato before heading to the races up the pitch. Running into Nagasato’s pass, Kerr got past both Sonnett and Emily Menges inside the box and beat Adrianna Franch at near post.

Shortly after halftime, Kerr doubled the lead, taking the lead in the Golden Boot race as well. Vanessa DiBernardo’s service from the right flank was perfectly floated to the top of the six-yard box, where Kerr muscled off Sonnett and headed in her second of the night.

However, the tables began to turn after that. Spurred by offensively-minded substitutions, Portland began to pour on the pressure, and it paid off. Just ten minutes after Kerr’s second goal, Ellie Carpenter sent in a long ball that was probably intended to be service but looked to be headed for the net. Naeher came out to punch it away but collided with Horan on landing, leaving her on the ground as Tobin Heath headed in the rebound.

Right back in it. @TobinHeath puts the header back right under the crossbar and it's 1–2.#PORvCHI | #NWSL pic.twitter.com/XhspM3VZFd

The tables really began to turn after this goal. Chicago did not deal well with pressure, especially in their own defensive half, and the Thorns fed off their mistakes. In the 69th minute, a poor clearance from Julie Ertz was blocked by Heath, landing at the feet of Christine Sinclair. The Canadian immediately returned the ball to Heath, who headed wide on the right flank before sending in a low cross. Caitlin Foord dummied the ball, drawing Casey Short in with her, and it left Sinclair wide open in the box, where she makes no mistakes, finishing the lovely sequence with a shot Naeher had no chance of stopping.

All even! @TobinHeath finds @sincy12 in the box, and she makes no mistake on this one. 2–2.#PORvCHI | #NWSL pic.twitter.com/SFVoJPZFAg

Chicago fought their way back in the dying minutes, never once looking like the side that had played a midweek game. DiBernardo came close to winning the game in stoppage time with a shot that Franch managed to push into the post. At the whistle, they had to settle for a point apiece, Chicago’s third draw in as many games.

Chicago (7-4-10) jumps Orlando (whose match against North Carolina was postponed to tomorrow morning) into fourth place and will travel to Orlando next Saturday. Portland (9-6-6, third place) hosts Sky Blue next Wednesday. 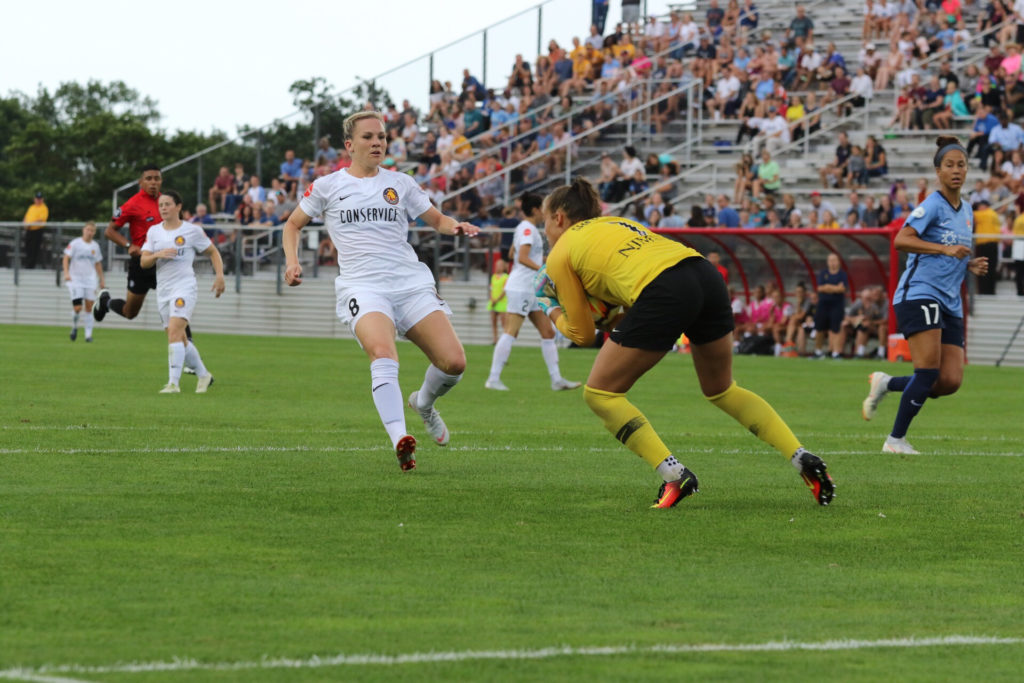 Amy Rodriguez scored in the 94th minute to salvage a point for the Utah Royals. (Photo copyright Nicole Rossi for The Equalizer)

Sky Blue FC enjoyed their longest lead of 2018 all the way to the final seconds of stoppage time, only to have a goal by Utah Royals FC forward Amy Rodriguez in the 94th minute rob them of their first win of the season, sending the game to a 2-2 draw. Katie Johnson scored both of Sky Blue’s goals, while a Domi Richardson own goal was the other tally for the visitors.

Johnson scored the lone goal of the first half, scoring off an assist by Raquel Rodriguez. Rodriguez played the ball forward for Carli Lloyd near goal, but Lloyd collided with defender Rachel Corsie and the pair tumbled to the ground. Rodriguez regained possession and took a couple of steps before passing for Johnson, who one-timed a falling shot out of the reach of Utah goalkeeper Nicole Barnhart to put Sky Blue on the board first.

Here is another look at that go-ahead finish by @katieajohnson33!#NJvUTA | 1-0 pic.twitter.com/9iaeMGHcWJ

Shortly after the start of the second half, Johnson completed her brace after getting on the end of a lofted pass from Domi Richardson. Johnson used her first touch to flick the ball over her defender before making a run towards goal. She seemed to take a low, soft shot, but the ball bounced off Katie Bowen’s heel and right back to Johnson, who rifled off a shot from the top of the box for her second goal of the night.

In the 55th minute, the game was suspended for just under 40 minutes because of lightning in the area, and when the game resumed, it wasn’t long before Utah found themselves on the board. Amy Rodriguez played a ball inside the box intended for Katie Stengel, but Richardson got a bad touch on it for an own goal, cutting Sky Blue’s lead in half.

The game remained locked 2-1 in Sky Blue’s favor until the very last seconds of the match until Corsie played a long ball over the field and into Utah’s final third. The ball eventually rolled out for a Gunny Jonsdottir throw in, after which the ball was pinged around as Sky Blue attempted to clear it from danger, but a short backwards pass by Christen Press put the ball at Rodriguez’s feet, and she blasted the equalizing goal from the top of the box.

Sky Blue FC 2–2 Utah Royals FC. Rodriguez scores in the last seconds of the match to equalize for the Royals. Johnson with a brace for Sky Blue. #NWSL pic.twitter.com/X7mKbJ9Ql0

Sky Blue (0-14-5, 5 points) next hits the road for a midweek match against the Portland Thorns FC on Wednesday, August 22. Utah (7-7-8, 29 points) also retakes the field Wednesday night in a clash against the Washington Spirit.