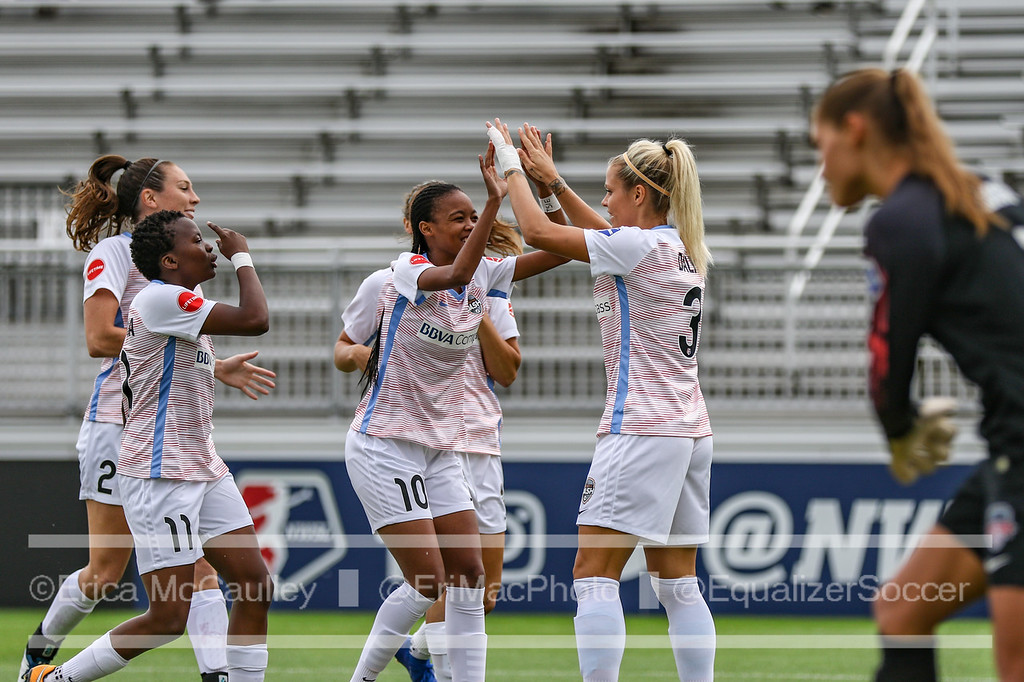 The Lowdown: The Houston Dash are almost contenders

The Lowdown: The Houston Dash are almost contenders

The Houston Dash are almost contenders. The club, which began the season so offensively inept that many wondered if it would win any matches at all, still has a shot — albeit a long one — to sneak into the playoffs for the first time. More importantly, there is a direction and a vision, which add up to a belief that the team is on the verge of doing something special.

The Dash opened the season playing an ultra-defensive, counterattacking style. Head coach Vera Pauw deployed Rachel Daly and Kristie Mewis as her outside backs. While both were suitable in those roles, it left the front six with precious little attacking bite. The evolution from there has been tremendous. The Dash traded for Allysha Chapman and, later, Comeau, which allowed Mewis and Daly to move up the formation. Clare Polkinghorne also joined the club to add options in defensive midfield and central defense. Eventually, Mewis tore her ACL, but Daly is enjoying her best National Women’s Soccer League season, most recently scoring both goals in a 2-1 victory away to Sky Blue FC. Sofia Huerta, acquired from the Chicago Red Stars in the same trade that brought Comeau, instantly became an integral part of the Dash attack.

“They’re two massive additions for us,” Daly said of Huerta and Comeau. “They both come with so much experience, both very fit workhorse type players. So much talent between the two of them, so I think it definitely changed our season bringing them in.”

“It’s not easy for players to come in so far in[to] the season and to adjust to the playing style and to the players,” Pauw said of the duo. “I think they’ve done tremendously well in the way that they just dropped into a team and let’s go, let’s do it. I’m very happy with them.”

Extra: Why the NWSL needs Houston, Orlando markets to get it right

Pauw said the move to being a more offensive-oriented team has been an intentional one even beyond the shift in personnel. But sometimes, the first-year NWSL coach said, the tradeoff leaves the team too exposed.

“Teamwork is further developed, and we can get more pressure forward,” the coach said. “We couldn’t get that before. But early in the year we did not give the chances away that we do now. It’s a give and take. If you start to play better than you also leave gaps.

Another addition the Dash made was from within. Captain Kealia Ohai missed the start of the season while she put the finishing touches on rehabbing a torn ACL. Now, as the season ends, Pauw says Ohai has no more restrictions and looks like she is fit to play in multiple games per week.

“I feel good,” said Ohai, who tied for the league lead in goals in 2016. “It’s been a long season for me just building up and getting back from my ACL. It took a while. I started playing around eight months, nine months, and it took two or three months to get back into it — I think at least a year til you’re feeling like yourself. For me it was just confidence.” 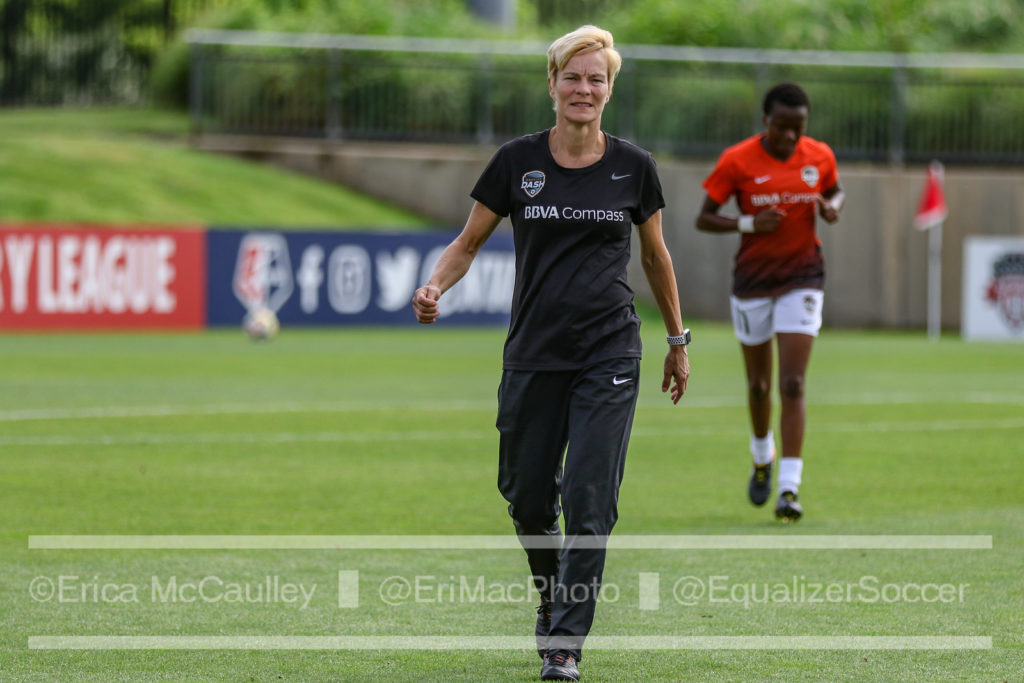 Ohai conceded that the recovery was “a lot more mental than I thought,” and said having her boyfriend, Houston Texans defensive end JJ Watt, also rehabbing from a serious injury was a help in getting through the process.

The results on the field also suggest Ohai is feeling more comfortable and getting back to her explosive self. Last weekend at Sky Blue, the first time Ohai got isolated in space against right back Christina Gibbons, she blew by and had an easy cross that found Daly for the first Dash goal of the night.

“Right now I feel confident 1-v-1 against anyone in the league, so I feel really good,” Ohai said. Asked about getting the ball in similar positions more often, she added: “I think that’s where I’m the most dangerous. I want to get in those positions more. That’s where I’m best. That’s what I tell Vera and she agrees I’m best isolated 1-v-1, so I’m trying to get into that position more, because that’s where I can contribute the best from.”

The Dash win at Sky Blue lifted them to 26 points, a team record. For a side that has never reached the playoffs or even been at .500 deeper than 15 games into a season, a new points record is hardly cause for a party. But it’s one small building block. And the team is now focused on its final four matches of the season — and what they hope will be a miraculous run to the top four.

“Everyone’s together on this team. I think we show a lot of character,” Daly said. “We’re happy with the fact that we’ve got the most points in history, but we’ve got to push on now and get some more and try to make playoffs for the first time.”

Pauw says she talks with the players regularly about the need to win the remainder of the games — “every game is a final for some time now” — but the biggest sign that the Dash could be going places is that neither Pauw nor the players were particularly pleased with the performance in New Jersey, even though it was a winning one.

“We should have scored a few of the chances and it wouldn’t have been that difficult, and we were very sloppy with our possession of the ball,” Pauw said. “We could have easily given away this win.”

Echoed Daly: “We have to reflect on tonight and know that it wasn’t our best. What we’ve got to do is go back and learn from it and improve from it, and train hard this week and push on for another three points next time.”

— Wednesday’s Seattle Reign-Chicago Red Stars match was played in substandard air quality, the result of major forest fires that are sweeping the Pacific Northwest and Southwestern Canada. In the end, there did not seem to be any major effects, but we’ll see how each team pulls up heading to their next matches.

— The Royals played Wednesday night and then Saturday afternoon, the latter in oppressive heat and a less extreme version of the poor air quality in Seattle. They drew 8,154 and 8,740. The 8,154 was for a midweek match against an uninspired opponent (albeit it one with Mallory Pugh, Rose Lavelle, and Andi Sullivan). Still if that is a general landing point in Utah, then the Royals are well on their way to being the “best thing this side of Portland.”

— Sky Blue are now three-quarters of the way to a winless season after a 2-1 home loss to the Dash. The club has dropped 14 of 18 matches with draws in the other four.

— Sky Blue and the Spirit are now guaranteed to finish last and second last, although Sky Blue has a chance to fight their way off the bottom of the table. However, neither will have the first pick. That belongs to the Red Stars, who acquired it from the Royals — who acquired it as part of their franchise agreement (the Royals will not be slotted in to their regular spot based on order of finish.)

— Also of note, Sky Blue conditionally holds the Spirit’s first-round pick as part of the trade that allowed the Spirit to move up and pick Rose Lavelle first in the Boston Breakers dispersal draft. The conditions on that pick remain undisclosed.