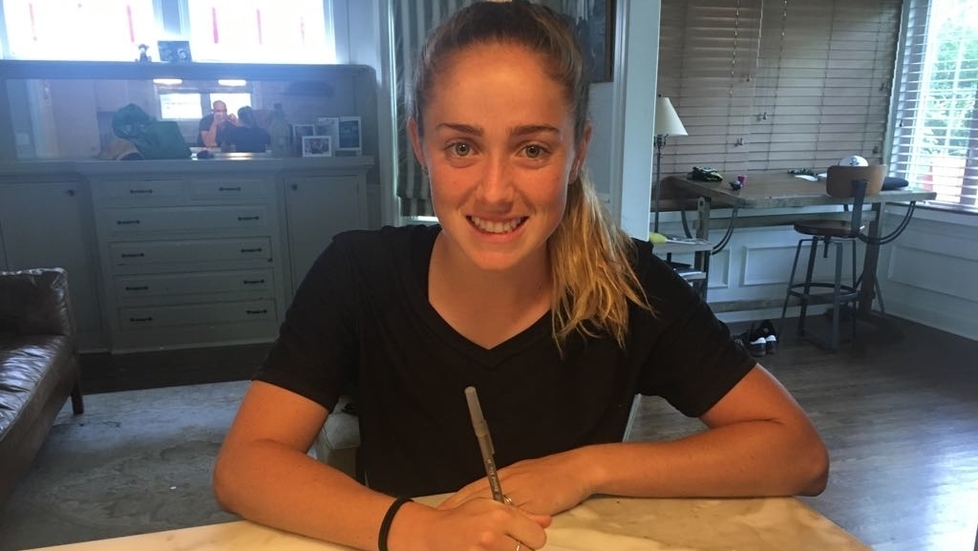 For every player entering the National Women’s Soccer League College Draft, the wait to hear your name called out can be a combination of anxiety and excitement. But for those not selected, it can also create a future of uncertainty.

So when 23-year-old Brianna Visalli heard those magic words – “With the 19th pick of the 2018 NWSL draft, the Chicago Red Stars selects, Brianna Visalli, Pepperdine University” – it was supposed to be the start of something new and exciting.

The reality was that, despite being a second-round draft pick, she never earned a contract with the club. Her time in Chicago was spent on the practice squad, collecting stray balls, and sitting out sessions that didn’t involve those on the 20-player roster.

To support herself financially, her day would start with one of two jobs in the morning – either making smoothies in a café, or babysitting and dog walking. Then she’d have practice with the Red Stars, before heading to her third job of the day, working as a waitress in a bar.

“Being a reserve was not as great as it’s chopped up to be,” Visalli told The Equalizer.

“You show up to practice every day, you’re not really rewarded, and you are treated like a reserve in the sense that you go get the stray balls and are told, ‘you’re not needed for this section.’

“It’s hard to develop in this environment because the emphasis is on the contracted 20 [players], so practices are structured around their shape and pressing systems, where I was usually the opposition. It’s not a criticism, that’s just the way it is, but that was never going to help my progression as a professional.”

Extra: Why the NWSL needs Houston, Orlando to get it right

The San Jose, California, native had been warned by previous coaches about entering the NWSL — not because she wasn’t good enough, but because of her size.

Visalli is not your typical U.S. ‘athlete’ who is faster, fitter, stronger than those she comes up against. But what she lacks in size, she says, she makes up for in passion and desire.

“Typically, I was warned off for my size,” she said.

“For me, you have players that have 5-10 years of experience and you’re trying to fight for their place. It’s a fast and physical league and I’m not a projectable player. I’m not the sort of player where scouts or coaches are going to say that ‘she’s got this height, this speed or blah, blah, blah.’ I don’t have any of that. It’s more a passion and desire, and the good coaches can see that, I guess.”

Visalli was keen to stress that she does not want to criticize the NWSL and is grateful for the opportunity she was given to train with the Red Stars. But she knew that she couldn’t carry on in Chicago if she wanted to realize her ambition of being a professional soccer player.

“I love coming into training. Not that I would dread going to Chicago, but when you are second-class because you’re not as important as others, it’s kind of like ‘great, another day where I don’t feel I can express myself.’ Whereas here I am being invested in and I’m being looked at as something that has potential and growth.”

Which is why, when the chance to play in England, at West Ham United, she leapt at the opportunity. West Ham is managed by former Boston Breakers head coach Matt Beard.

‘The Hammers’ have leaped two divisions in England’s football pyramid following a recent restructure by the English FA, and will participate in the Women’s Super League this season for the first time.

For Visalli, the chance to focus on soccer full-time, was too good to turn down.

“No coach has ever at this level been able to say that, so it is a really, really unique environment. And the coolest thing is, usually when you take a risk you’re like, ‘oh crap what have I done,’ but I’m like, ‘I can’t believe I am so lucky to be here.’

“I do have to thank [Red Stars coach] Rory Dames too, who helped me come here. He recommended me to Matt and wanted nothing but my development in game-like scenarios.”

The Pepperdine University graduate has already turned out for her new side in preseason, adopting a central midfield role in front of fellow American, Brooke Hendrix, who was signed by West Ham from Italian side, Brescia.

Sky Blue FC defender Erin Simon is also on trial with the club, but it remains to be seen if she will be able to earn a contract.

Visalli admitted that having her fellow Americans in the side was a bonus, but that the experience at West Ham, even at this early stage, was already incredibly positive.

“It’s actually surpassed by expectations. I think I have to thank Matt for that, just because of his coaching philosophy, and not to discredit what’s going on in the U.S., because it’s very competitive, but sometimes the soccer takes precedent over the player development.

“As of right now, I find that its more technical and intellectual here, not that the game isn’t there [in the U.S.], but a lot of the time, it gets put as second priority with the physicality and the speed of play. I am happy to have this opportunity to develop, but for now I am growing as a player instead of being a reserve, which meant I wasn’t getting game experience.

“I love coming into training. Not that I would dread going to Chicago, but when you are second-class because you’re not as important as others, it’s kind of like ‘great, another day where I don’t feel I can express myself.’ Whereas here I am being invested in and I’m being looked at as something that has potential and growth.”

Visalli and her new teammates don’t have a lot of time to get to know each other, despite the midfielder stating that she feels “like we’ve known each other for years.” They kick off their season this weekend in the Continental League Cup away at Arsenal.

But Visalli hasn’t studied the opposition she is due to face this weekend, or indeed this season, in too much depth, as she prefers instead to venture a little into the unknown.

“I don’t know much, and I prefer to keep it that way, only because I don’t want to hype up an opposition or look down on an opposition; I just want to respect them equally and let our style dominate.

“At the end of the day, the best team is going to win, so unfortunately I can’t give you much insight on my thoughts and opinions on the league yet, but I’m excited and honored to be here.”