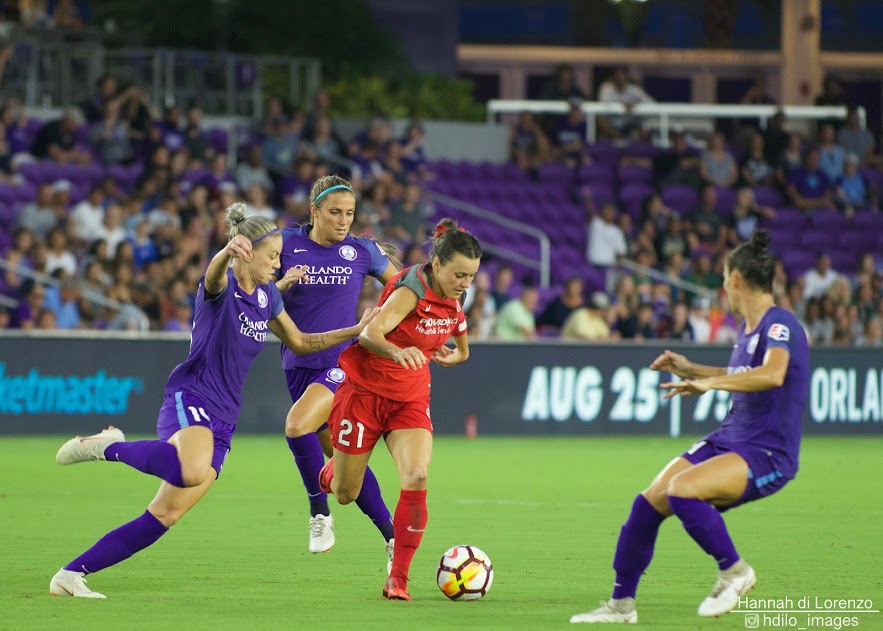 Orlando’s playoff hopes just got weaker as they lost to Portland at home, swapping places in the standings.

The Pride came out very strong, earning five corners in the first ten minutes and keeping Portland pinned back with their pressure. The first half had some of the best off the ball movement the Pride have demonstrated this season, while Portland played a very direct game.

However, it was Hayley Raso against the run of play that had the best chance of the half. In the 17th minute, Alanna Kennedy made a back pass so soft, it was more of a touch than a pass. Raso jumped on it and got a shot off past Ashlyn Harris, but it hit the post. Later in the half, she sent in a dangerous cross that bounced off the crossbar.

It was an entirely different tale in the second half. Just two minutes in, the Thorns earned a corner which Tobin Heath took short to Meghan Klingenberg. Receiving the ball back, Heath sent in a low cross that Ana-Maria Crnogorcevic flicked on, and Lindsey Horan beat Kennedy to find the back of the net.

Just six minutes later, Portland doubled their lead as Raso skillfully beat out her defenders, first with a flick to bypass Toni Pressley and then outpacing Kennedy, and launched it past Harris.

After hitting woodwork a couple of times, Hayley Raso gets hers. @ThornsFC up 2!#ORLvPOR | #NWSL pic.twitter.com/DLfhRnIQxo

At this point the momentum was entirely with Portland, and it continued to be that way for most of the rest of the game. When Orlando did threaten, Adrianna Franch came up with several huge saves to preserve her team’s lead.

Portland (9-6-5) moves up to third place and hosts Chicago next week. Orlando (8-7-6) is still in it at fourth place, although Chicago is just one point behind and Utah only two. The Pride travel to North Carolina next Saturday.

Sky Blue were without the services of two of their starters on the night, putting them at an early disadvantage. Carli Lloyd sat out due to a red-card suspension, while Shea Groom was out in accordance with the NWSL’s concussion protocol. Head coach Denise Reddy also had to make an early substitution after Christina Gibbons came up limping from a slide tackle, replacing her with Rebekah Stott in the 36th minute.

The Dash took an early lead in the seventh minute when Kealia Ohai beat her defender, Christina Gibbons, with a run down the near flank before centering the ball for Daly. Daly one-touched her shot past Sky Blue goalkeeper Kailen Sheridan for her first of two goals on the night.

Ohai with the work, Daly with the finish. Houston up, 1-0. #NJvHOU pic.twitter.com/SqZ2Swj7hR

Daly thought that she had doubled Houston’s lead in the 28th minute, heading in a ball that looked to have crossed the line just before Sheridan got ahold of it. However, the official ruled that Sheridan made the save, and, despite the disagreement from Houston’s bench, the non-goal stood and the Dash would enter halftime leading by a single goal, 1-0.

Shortly after the hour mark, Sky Blue pulled by level courtesy of Madison Tiernan. Katie Johnson possessed the ball well before playing it over to Raquel Rodriguez, who centered the ball for Savannah McCaskill. McCaskill fired off a shot only to have Dash netminder Jane Campbell make the kick save, but Tiernan was perfectly positioned to knock the rebound in for the equalizer.

Despite a strong push by Sky Blue to take the lead for just the second time this season, the Dash would strike next after Raquel Rodriguez was whistled for a handball inside the box, resulting in a Houston penalty kick. Daly stepped to the spot and buried her shot into the upper 90 for her second goal of the night and ninth on the season.

With three more points under their belts, the Dash will now return home, where they will take on the Washington Spirit on Friday, August 17. Sky Blue remains at home for a rematch against the Utah Royals FC on Saturday, August 18.

The Reign kept the Royals’ hopes of moving into a playoff position back for another game-day, dealing a shutout in tough conditions. In addition to the high temperatures in the afternoon, the wildfires that have been ravaging much of the west half of the country had so affected the air quality in the already high altitude of Sandy, Utah that both teams’ trainers had oxygen on hand by their benches in order to make sure they were prepared for a grueling match.

The league also made the decision to implement two additional water breaks for a total of four (at the 15th, 30th, 60th, and 75th minutes), which made a lot of sense in looking out for the players, but did cause the match to have something of a disjointed choppy feel.

Much of the first half was played in the space between the boxes, with Utah not recording its first shot until well into the first 45 minutes. Christen Press was active for her team, but struggled to string possession together with the rest of the Utah attack to trouble Lydia Williams and the Seattle defense. For their part, the Reign looked perhaps more dangerous as the game progressed, but only in a matter of degrees in a matchup that has been defined by staunch defense.

However, not three minutes into the second half of the match, the Reign found a way to break through. Seattle took a short corner on the left side of the pitch that was only cleared as far as Megan Oyster. Oyster then sent a solid ball into the Utah box, that Jess Fishlock finished with a powerful header to notch her first goal of the 2018 season.

Utah pushed for an equalizer as well as they could, especially once Amy Rodriguez came on for Taylor Lytle, but both teams ran out of gas long before the final whistle. The Royals will be disappointed to miss out on points from this match, but they have chances at redemption in upcoming matches against Sky Blue and the Washington Spirit. The Reign will have to try to retain as much energy as possible, as they have a short turnaround against the Chicago Red Stars on Wednesday at home.