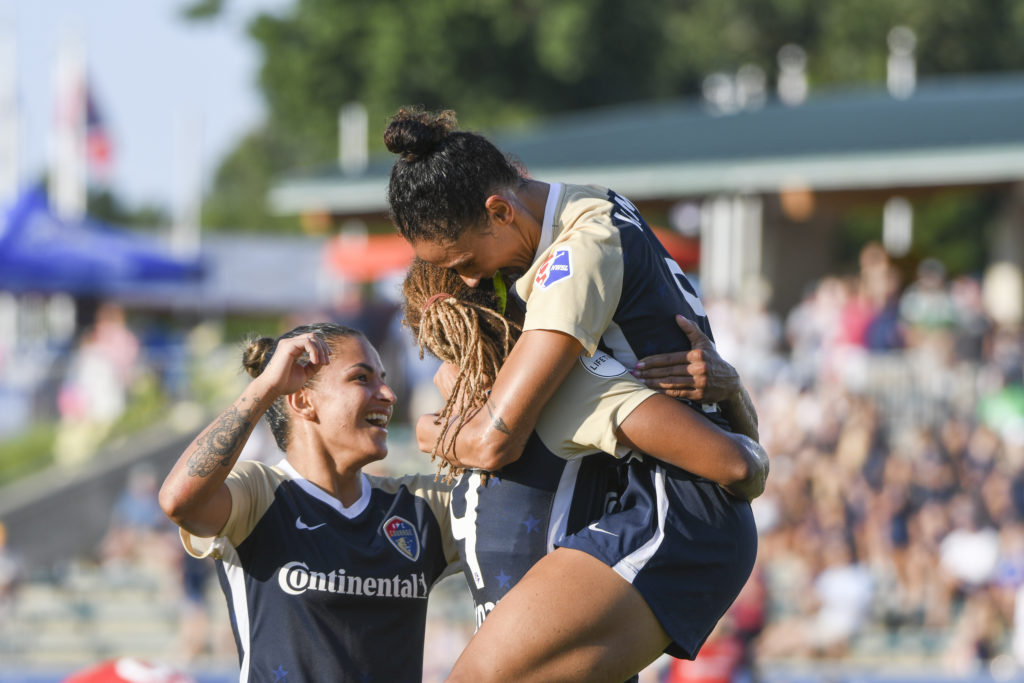 The Seattle Reign tidily took care of business against the Washington Spirit in the last match of the weekend, carrying much of the possession and notching goals from Jasmyne Spencer and Jodie Taylor. The win solidified the Reign’s current tenure in second place in the NWSL standings, behind the shield-winners North Carolina Courage. The Spirit continued a skid that has gone 10 games without a win.

The game began with end-to-end action, with neither team quite finding the necessary finishing to break the game open. It wasn’t until right before the first half whistle that the Reign were able to turn their offensive pressure into an opening goal. A nice ball was sent in over the Spirit defense to fall to Spencer, who took a good first touch and chipped the ball into the far upper 90 to go up 1-0 as the half ended.

The Reign would keep the pressure up as the second half continued, but their finishing continued to trouble them, with a number of quality looks going over the bar or just wide of Washington’s posts. Finally, it was quick thinking by Megan Rapinoe and Jodie Taylor to double Seattle’s lead. Given a throw-in deep in Washington’s territory, Rapinoe sent the ball in for Taylor who, as per the rules, utilized free space behind the Spirit defense to have a clear shot at goal. She chipped it in, and the Reign were cruising to the final whistle.

The final half hour of the match did see Mallory Pugh and Rose Lavelle get some minutes together for the Spirit after coming back from injury, which will be good to see for Washington supporters, though the team is still looking for cohesion to close out the season feeling relatively strong.

The Spirit have a short turnaround until their next match, a Wednesday, August 8th matchup against the Utah Royals. The Reign will then get their shot at the Royals the following Saturday, the 11th.

Christen Press and Katie Stengel scored inside the last 13 minutes to rally Utah Royals FC to a 2-1 away victory over the Houston Dash. The win also sent the Royals above the Dash on the table where they now sit sixth, four point behind Portland Thorns FC in fourth. Veronica Latsko scored for the Dash.

Much of the opening half was a chess match with both teams trying to build through the midfield but not too much in the way of quality chances. The Dash broke through after Sofia Huerta was fouled by Lo’eau LaBonta about 40 yards from goal. Huerta drove the free kick inside 10 yards where Latsko lost her mark and got a free header which she put on goal. Royals keeper Nicole Barnhart appeared to make a slight move in the wrong direction before diving to her left and seeing Latsko’s shot go off her outstretched arm and in.

Barnhart would become a key factor in keeping the Royals in the match, making more than one difficult save to keep it a one-goal match. Still the evening had the feel of a Dash win until the 77th minute when Amber Brooks got tangled up around trying to collect a simple pass from her keeper Jane Campbell. Press sensed Brooks was having trouble and moved in where she was able to get a touch on the ball and set herself up to beat Campbell and tie the match.

Press, who refused to play for the Dash after being traded there on draft day, was booed during introductions and then every time she touched the ball throughout the 90 minutes, but her equalizing goal started momentum in her side’s favor.

In the 83rd the Royals were possessing in the midfield when Erika Tymrak unlocked the Dash defense with a scoop pass over the top where Katie Stengel was squeezing her way behind the defense. With no time to spare, Stengel brought her left leg up and volleyed the pass over Campbell and in for the game-winner.

The Royals (6-6-7, 25 pts) now head home where they will host the struggling Washington Spirit on Wednesday night at Rio Tinto Stadium. The Dash (6-8-5, 23 pts), now in 7th place and six points off the playoff pace, are at Sky Blue FC next Saturday.

After a dull first 45 minutes, a wild second half gave us one of the craziest games of the season that had a little bit of everything, including a red card, a saved penalty kick, and Sky Blue’s first lead of the season.

Neither Carli Lloyd nor Alex Morgan were on the field to start the match. Both sides began very direct, and with the exception of a few looks from Imani Dorsey, neither side could create much. In the 28th minute, Dorsey split Orlando’s defenders and went 1v1 with Ashlyn Harris, who came up big. Four minutes later, Kristen Edmonds was shown yellow for pushing Dorsey just outside the box, giving Sky Blue a great chance, but the ensuing free kick went straight into the wall.

Just before halftime, Marta had a similar chance, getting a little help with a deflection off the wall on her own free kick and sending it into the crossbar. The teams went into the locker room scoreless with neither side showing a clear edge, although Orlando had most of the possession. 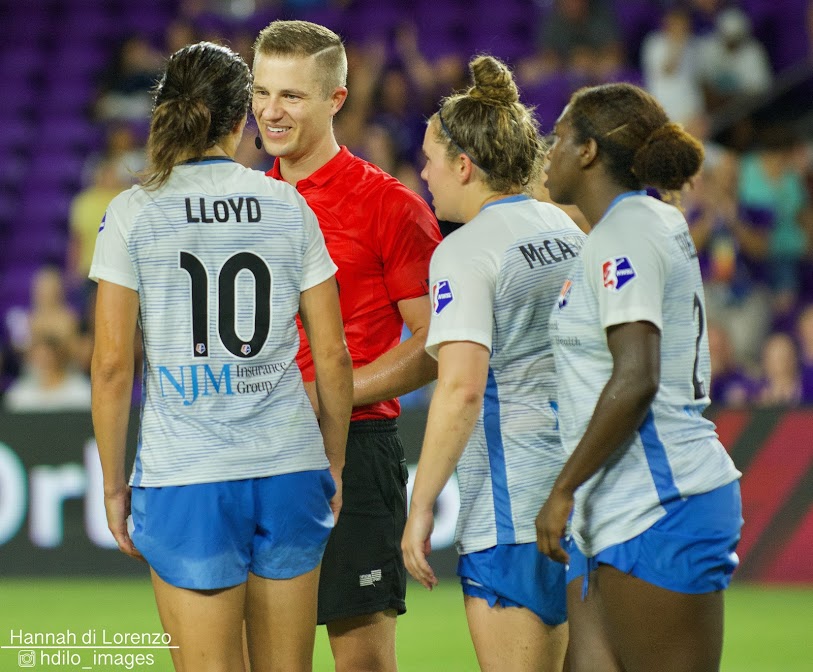 The second half was a different story. Just five minutes in, Dani Weatherholt pushed her way through three defenders and launched a shot toward the far post. Kailen Sheridan was able to tip it into the post, but Marta was there to clean up the rebound and put Orlando up.

It didn’t last for long. One minute later, Dorsey found the goal she had been looking for, as she was once again wide open in the box. Hands shot up by every Pride player, calling for an offside call, but the replay showed that Alanna Kennedy, on the ground, may have kept her onside.

In the 59th minute, what Sky Blue fans have been waiting for all season finally came to fruition: Shea Groom headed in a goal, giving them their first lead of the year and ending a 1,499-minute streak without leading. Unfortunately, Groom took a knock for her efforts and had to leave the game.

With both Morgan and Lloyd subbing on and Tom Sermanni abandoning any clear formation to go for the win, subbing off one of his three defenders, the game blew wide open. Harris came up huge in the 69th minute to deny Lloyd at point blank range.

In the 73rd minute, it was Weatherholt making things happen again. She muscled her way into the box, blazing past her defenders and past Sheridan, who went to ground in an effort to block the shot, leaving the ball in the air for Weatherholt to nod in and tie the game.

Six minutes later, Sheridan came up huge, going full stretch to block what looked like a sure goal from Morgan. The Pride threw numbers forward, and deep in stoppage time, it almost paid off.

A corner kick from Marta bounced around the box a few times, and after being recycled back in, Lloyd put her hand up to keep the ball out of the back of the net. She was immediately shown a straight red and sent off the pitch. Marta lined up to take the penalty kick, but Sheridan made a clean save as she sent it straight up the middle.

Orlando (8-6-6) is in third place and will host Portland next Saturday. Sky Blue (0-13-4), in ninth place, hosts Washington the same day.
GOAL SUMMARY

The North Carolina Courage clinched the NWSL Shield after a brace from forward Lynn Williams gave her side a 2-1 win over Portland Thorns FC.

The win, the Courage’s 15th of the season, was deserved after Williams’ goals in the 37th and 45th minute, with both coming off of crosses from the righthand side that found the NWSL top scorer in the box. Lindsey Horan was the player on target for the Thorns at the start of the second half, also bringing her total for the season up to 10.

North Carolina started the brighter and looked to take advantage of their superior possession. In truth, the opening half an hour created very few clear-cut chances, with Portland looking to exploit the space in behind the Courage defense, and the home side aiming to take advantage of the pace and movement of Williams and Jess McDonald.

The main talking point of the opening half an hour was in the 30th minute when Jess McDonald found some space down the left-hand side before charging into the box. As she looked to take a shot on goal, she was tripped by Thorns defender Emily Sonnett. It looked a nailed on penalty, but the referee said no, much to the displeasure of Courage coach Paul Riley.

Seven minutes later, however, the home side were ahead, and it was forward Lynn Williams who netted. The Courage countered a Thorns attack, which saw Brazilian defender Debinha feed Jess McDonald down the right. She crossed low across the ground for Williams, who beat Emily Sonnett to the ball to score from close range.

North Carolina bullied Meghan Klingenberg down the left side for most of the first 45 minutes, and it was from that area that a second goal was setup right on half-time. Merritt Mathias was able to find some space, before hitting a cross into the box that was cleared by Emily Menges onto Celeste Boureille, with Williams there to pounce and score her second and tenth of the season.

The Thorns first real effort on target resulted in an early goal in the second half after Hayley Raso was fouled on the edge of the box. Tobin Heath took the resulting kick, floating in a beautifully weighted ball for Horan, who beat Abby Erceg to the ball to head home her 10th goal of the season.

Despite the Thorns getting themselves back into the game, it was the Courage who bombarded Adrianna Franch’s goal with efforts, with Sam Mewis, Abby Erceg and Debinha all going close in the second half.

The Thorns gave a second half debut to Australian international Caitlin Foord, but the Pacific Northwest side couldn’t find the key leveler, as they fell to 8-6-5 (29 pts). The Courage meanwhile extended their winning season to 15-1-4 (49 pts) and claim back to back NWSL Shields. The Courage will be in Chicago next Friday while the Thorns will visit Orlando on Saturday.