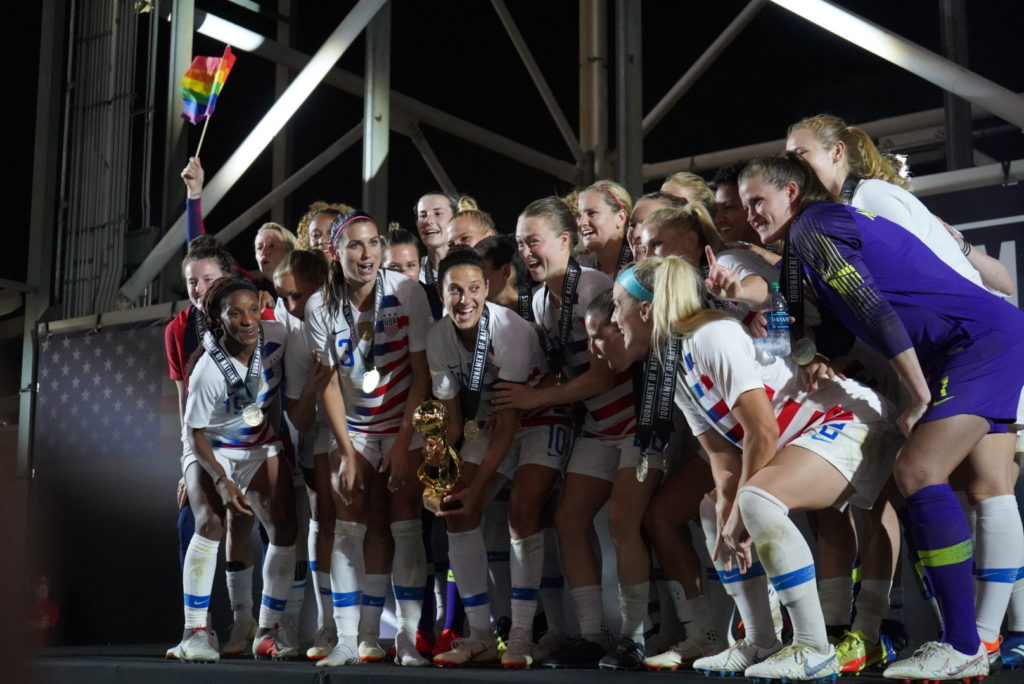 The first half could have been considered touch-and-go, but the U.S. women’s national team eventually walked away with the 2018 Tournament of Nations trophy after taking down Brazil, 4-1 on Thursday in Bridgeview, Ill., behind goals from Rose Lavelle, Julie Ertz, Tobin Heath and Alex Morgan. Brazil’s lone strike came from a Tierna Davidson own goal in the 16th minute on a sharp counterattack.

The game began as expected in a matchup between these two squads, with some chippy and physical play right from the starting whistle, but with the U.S. looking the better side. However, Brazil proved just how dangerous they can be on a quick counterattack when in the 16th minute, Beatriz was sprung on the left side of the field. She sent a cross in that Davidson stepped in to try to knock out for a corner, but the ball dropped in for an own goal that put the visiting side up 1-0 early.

Brazil take the early lead thanks to an unfortunate own goal from Davidson! pic.twitter.com/GZUbzMkaVR

The U.S. continued to combine in the midfield after the goal, not in small part due to the reinvigorated Lavelle, who made a long-awaited start after missing much of the year with the national team due to a lingering hamstring injury. That activity would bring the ultimate equalizer, when in the 33rd minute Lindsey Horan collected the ball outside of Brazil’s box, and sent a ball in that Lavelle half-volleyed home into Brazil’s upper 90. The 1-1 scoreline would hold until the half, but it looked like it was possible that the U.S. might break the game open eventually.

We will absolutely accept this ?! @roselavelle strikes it first-time and buries the equalizer for the #USWNT. pic.twitter.com/XeymRi10y4

And in the second half, it was the U.S. that completely took over. Less than 10 minutes into the second half, Heath worked her way to the end line with the ball, and sent a close cross in that went over the head of Rapinoe, but nevertheless found the foot of a charging Ertz, who would put the U.S. up 2-1 in the 53rd minute.

Not 10 minutes after that, Horan collected the ball near the midfield line, sent it in for a streaking Morgan, who held the ball up just enough to get some help. She then sent the ball over to the top of the box for a run by Heath, who notched a goal for herself not long after her earlier assist. And suddenly the U.S. had the two-goal difference they needed to win the Tournament of Nations title.

It would then be Morgan who put the game on ice, when a free kick outside the box was taken well by Rapinoe in the 77th minute. Morgan’s run into the box went completely unmarked, and she caught the Brazil keeper in no-man’s land to give the Americans their fourth, and a comfortable three-goal lead.

When life gives you a @mPinoe cross… pic.twitter.com/20I9sojmdq

Morgan picked up a knock on her left ankle at the very end of the match, which will be something to watch for supporters of the Orlando Pride, but she seemed to be able to walk slowly under her own power in the post-game ceremonies. With the win, the U.S. won the Tournament of Nations for the first time in year two of the even, knocking Australia (who had a very good tournament themselves) off the top spot. Brazil left the tournament with one win, against Japan, but a deficit behind the U.S. and the Matildas that has to be concerning looking towards the World Cup in France next year.