Also in today’s roundup, Red Stars highlight Team of the Month, NWSL injury report is out, and Priestman leaves Canada for England 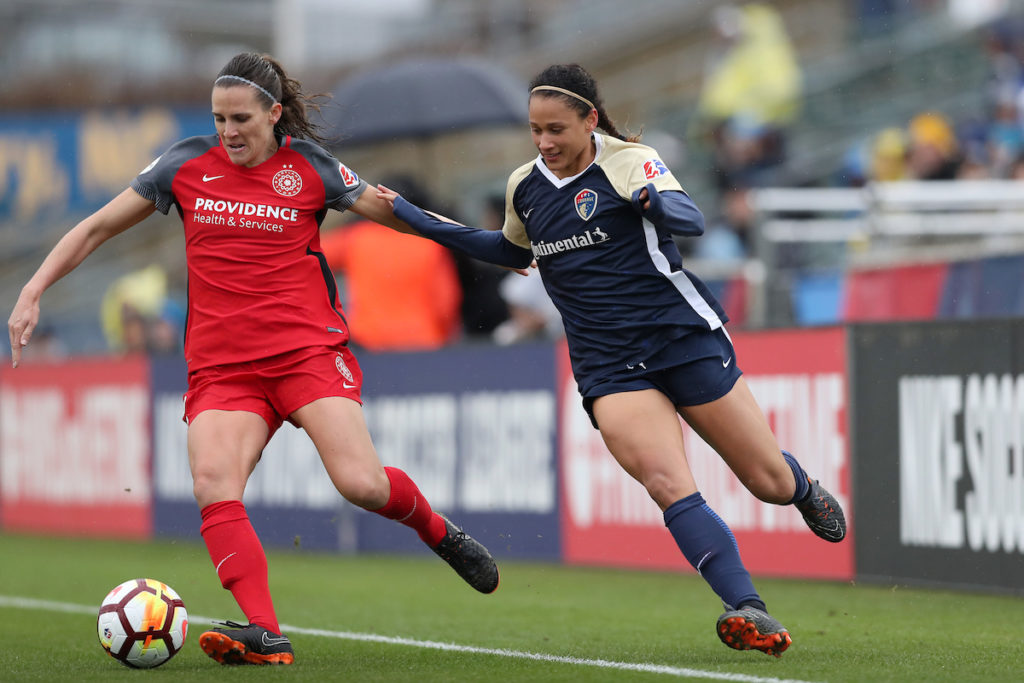 Portland Thorns defender Katherine Reynolds underwent successful surgery today to repair a torn MCL in her right knee and will miss the remainder of the 2018 NWSL season. She had to be subbed out of the Thorns’ last match, a 2-1 win over Sky Blue on July 21, at halftime. Reynolds has been a key part of Mark Parsons’ backline since joining the Thorns in 2016 and played a big role in last year’s surge to the NWSL Championship, although injuries have dogged her tenure in Portland. Earlier this season the defender celebrated her 100th NWSL match with her first-ever goal in the league, the Thorns’ only goal in a 1-4 loss to North Carolina.

For the second season in a row, North Carolina Courage defender Yuri Kawamura will be forced to end her season early due to an ACL and meniscus tear. She was previously out of commission for just over a year after injuring her knee in May 2017, making her 2018 NWSL debut just two months ago in a 1-1 draw at Houston. Kawamura started the final of the inaugural women’s International Champions Cup against Olympique Lyon last week, which the Courage won 1-0, but went down in the 31st minute and had to be subbed off. 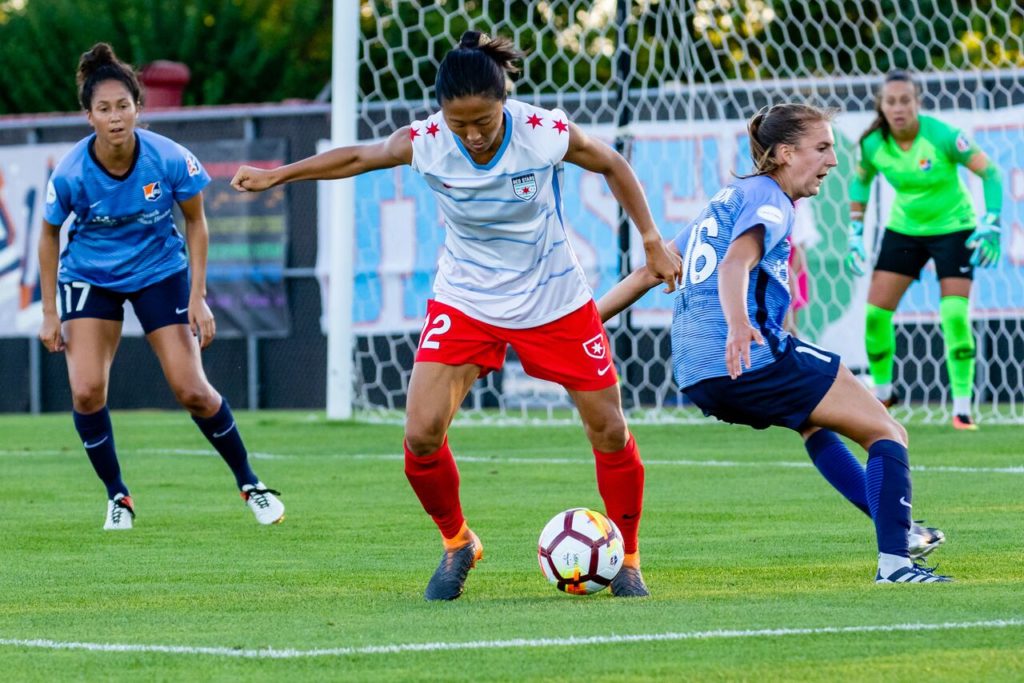 Sam Kerr, Yuki Nagasato, and Katie Naughton represent the Chicago Red Stars on the NWSL Team of the Month for July, giving the Red Stars the highest tally of any team for this month’s selections. This is Kerr’s first selection of the year and Naughton’s first-ever, and Nagasato makes it back to back months after also being selected in June. Naughton played every minute for Chicago in July, while Nagasato notched three assists and Kerr scored four goals, including a hat trick against Sky Blue.

Lindsey Horan and McCall Zerboni continue their MVP campaigns with their fourth appearances of the season apiece, leading the Thorns and Courage, respectively, to undefeated runs in July. Rachel Daly and Megan Rapinoe join them up top. Daly played every minute for the Houston Dash in July, scoring three goals, and has made her third straight team of the month. Rapinoe tallied two assists and two goals for Seattle, making her second team of the month this year.

Abby Erceg, Theresa Nielsen, and Rachel Corsie round out the defense. Erceg and Nielsen helped their teams maintain their standings as the league’s best and second best defenses, respectively, while Corsie won back to back saves of the week with Utah. This makes the first appearance on the team of the month this season for Corsie and Nielsen, and Erceg makes her third straight appearance. In goal, her first appearance this year, is Adrianna Franch, who conceded just one goal in July.

The  team of the month is voted on by members of the NWSL Media Association.

“From the calibre of people involved, the investment and the general growth of the women’s game in England, I genuinely believe we can get to number one." @bev_priestman joins the #Lionesses ?https://t.co/YgPkPYuKXu

Formerly with Everton and the FA, Bev Priestman is returning to England to join Phil Neville’s coaching staff as the assistant coach for England’s women’s national team. Priestman was most recently with Canada for the last five years, serving as the director of their youth EXCEL program for the U15 to U23 age groups, the head coach of the U17 WNT, and a technical assistant for the senior WNT. During her tenure, Canada’s WNT won the bronze medal at the 2016 Olympic games. She also led the U17 sqaud to the quarterfinals of the 2014 U17 Women’s World Cup , won the inaugural CONCACAF U15 Championship in 2014, and placed third at the CONCACAF U17 Championship in both 2016 and 2018. 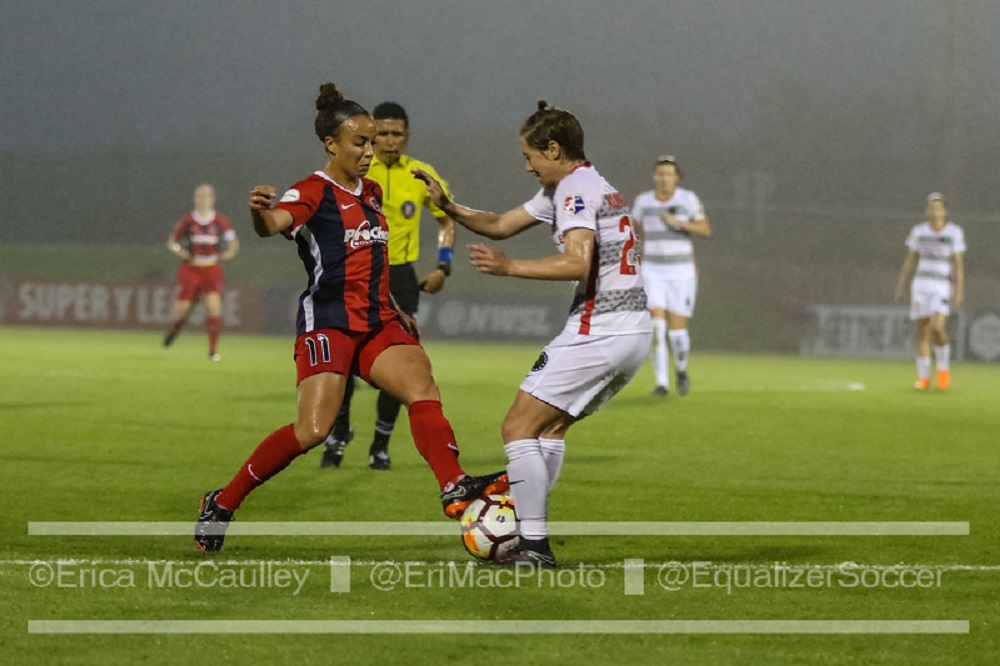 The latest edition of the NWSL injury report is out ahead of Sunday’s games. Alongside the aforementioned season-ending injuries to Reynolds and Kawamura, notable changes include Bev Yanez out for Seattle with a right foot fracture and Arielle Ship upgraded to questionable for Washington after last season’s ACL tear. Mallory Pugh and Cali Farquharson have also been removed from the injury report and are now available for the Spirit.

The full injury report is as follows:

Real or fake? Tournament of Nations takeaways through the lens of France 2019
Five things to know: USWNT at the U-20 World Cup